May 2, 2012 4:07 PM PHT
Rappler.com
Facebook Twitter Copy URL
Copied
Do you still remember the first time you rode a bike? Let’s reminisce and revisit the history of bikes.

MANILA, Philippines – Ever ridden a bone shaker? How about a running machine?

Two centuries ago, these were the names given to a bicycle. Let’s reminisce a little bit further and uncover the history of bikes.

In 1817, a German named Karl von Drais invented the first steerable two-wheeled vehicle man has ever ridden. It was made out of wood and did not have any pedals.

One must push his feet against the ground to make the machine move. It was also dubbed as the dandy horse, as it was popular among dandies, or men clad in stylish attires.

Pedals were later on added in 1839 by Scottish blacksmith. The pedals allowed the rider to propel the machine without the feet touching the ground.

In the 1860s, the boneshaker was born; claiming to give its riders a bone-shaking experience. French inventors Pierre Michaux and Pierre Lallement added rotary cranks on an enlarged front wheel clasped by metal frames. This innovation made navigation easier. And due to its commercial success, boneshakers entered mass production.

It was around this time when the French coined the term bicycle.

In 1870, the new fad was England’s high-wheeler. It was made out of metal and had solid rubber tires. The larger the front wheel, the better. Some wheels were even 5 feet high.

Englishman J.K. Starley introduced the chain drive which allowed the rider to control both front and rear wheels. This time, the wheels had equal sizes.

Two centuries later, and after a few upgrades here and there, bikes are still everywhere. 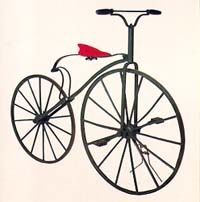 The Wright brothers, inventors of the first flying airplane, operated a bike repair shop before they built their 1903 Wright flyer.

Even before international flights were popular, a 25-year old man named Fred Birchmore toured Europe, Asia, and the US in 1935. He pedaled 25,000 miles and worn out 7 bike tires before finally deciding that it was time to take a boat instead.

Around 100 million bikes are manufactured each year. In China alone, reports said there are over half a billion bikes.

European city dwellers bike a lot —in Italy, 5% of most trips are on bicycle, 3% in the Netherlands. Seven out of 8 Dutch people own a bike.

In Japan, almost everyone rides a bike. You can see businessmen in suits riding bikes. You can even see mothers biking with their babies safely tucked in a carriage in front of the bike.

In the past, the longest bike invented was 20 meters long and seated 35 people.

You can bike up to around 1,000 kilometers using an energy equivalent to one liter of petrol. And a single car parking space can already fit 20 bikes. The world can also save about 238 gallons of gasoline per year by replacing car trips with exciting bike trips.

It can cost you more burnt calories too. Cycling for an hour can burn 600 calories. Biking also allows you to travel 3 times faster than walking.

So if you still haven’t ridden a bike, you better start practicing as you are missing out on all the fun. And as for the avid cyclists, now you know your bike history. Just keep pedaling. – with reports from Fritz Rodriguez/Rappler.com

(Rappler is a media partner of the “Globe Cordillera Challenge 3,” an uphill adventure that spans 27 kilometers. First launched in 2010 by the Cordillera Conservation Trust and Globe Telecom, the Challenge will involve 280 bikers nationwide who will race for a cause: awareness about reforestation. Click on the interactive map, follow the trail, and discover more about Cordillera’s forests, watersheds and environs.)