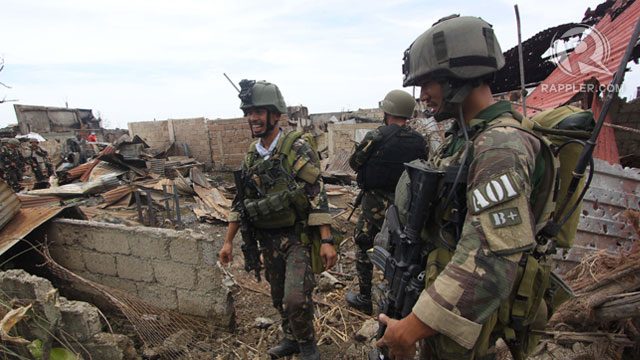 MANILA, Philippines – The military will double the size of its elite anti-terrorism unit to a regiment composed of 6 companies, according to Army chief Lieutenant General Noel Coballes.

“We saw the effectiveness of the unit during the Zamboanga City siege. We are strengthening our anti-terrorism efforts. From a battalion, we will increase it to a regiment. We saw that the unit will be a big help in terms of reaction to the same events,” Coballes told reporters on Tuesday, January 7, at the sidelines of the Joint Department of National Defense-Armed Forces of the Philippines New Year’s Call.

The current Light Reaction Battalion (LRB) – which consists of 3 companies or about 300 troops – led over 3,000 soldiers and police deployed in the Zamboanga City siege in September 2013. It is composed of battle-tested soldiers recruited from the Army’s crack fighting units, the Scout Rangers and the Special Forces.

Before the Zamboanga crisis, the LRB troops were deployed to operations against the Abu Sayyaf Group (ASG).

As the name connotes, they move with speed and carry only the most essential weapons with them. They are trained to clear buildings. They are experts in counter-sniper tactics. They can fight in total darkness using modern gadgets and equipment. The troops were originally trained by the Americans after the Sept 11, 2001, attacks and started as a Light Reaction Company of two dozen troops.

The Philippines and the US are currently finalizing a military-to-military agreement to expand cooperation between the two militaries. The chief of the Philippine panel, Defense Undersecretary Pio Lorenzo Batino, said they are finalizing the schedule of the 5th round of talks.

In Zamboanga, the LRB troops got the honor of finishing the fight but also the tragedy of losing the most. Eight of the 20 soldiers killed belonged to the LRB. At least 37 others were wounded.

“Some of them were injured. We need to replace these people. And because we saw the need for more troops, we decided to increase,” said Coballes.

All 300 of LRB troops were deployed to Zamboanga City in September. The terrain proved tough for the other units used to fighting rebels in the jungles and remote, uphill areas. (READ: The first to respond, the last to leave)

The villages occupied by Moro National Liberation Front (MNLF) rebels were populated with thousands of residents who lived in shanties, owned small shops and worked in buildings. The rebels were shooting from rooftops, windows, and back alleys. Their biggest defense were the residents trapped in the battle zone.

Coballes said the Zamboanga siege taught the military a lot of lessons. “We will change a lot of things. We will add doctrines in terms of addressing the same incident,” he said.

The LRB troops continue training with their American counterparts through bilateral exercises. – Rappler.com