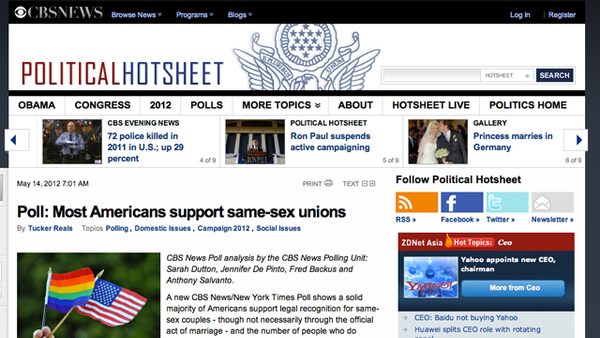 Nearly a week after US President Barack Obama openly supported same-sex marriage, a CBS News/NY Times Poll shows a majority of Americans support legal recognition of same-sex couples – though not necessarily through marriage – and that a significantly higher number of the youth support full marriage rights for gay and lesbian couples.  Soon after making his announcement, Obama tries to consolidate support among religious leaders.  Same sex-marriages is dividing churches in the US.

Read more about the poll on CBS and how same-sex marriage is dividing churches on the New York Times.
For reactions from Filipinos, read a gay Filipina in NYC’s blog and its impact in the Philippines on Rappler.