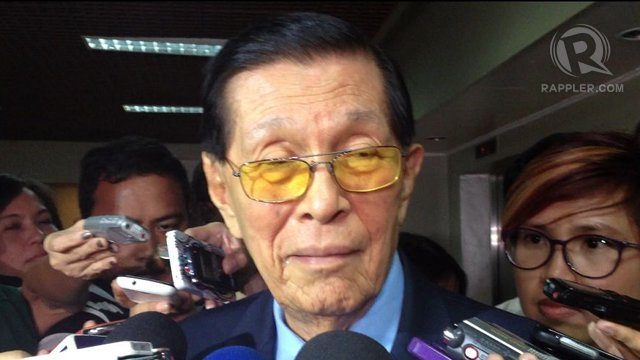 In the report of committee chairman Teofisto “TG” Guingona, the panel referred to the Integrated Bar of the Philippines (IBP) and the Supreme Court the cases of Enrile, Reyes, and other lawyers for disbarment or disciplinary proceedings.

“In order to preserve its reputation and integrity, the legal profession must be free from those who use their knowledge or skills to perform or facilitate criminal activity,” stated the 122-page report released on Tuesday, April 1.

Besides Enrile and Reyes, the report named Richard Cambe, political staff of Senator Ramon “Bong” Revilla Jr, and other notaries, business advisers and legal counsels as lawyers who should be disbarred or disciplined over their alleged involvement in the scam.

It is one of the recommendations in the report, along with the prosecution of Enrile, Reyes, Revilla, Cambe and Senator Jinggoy Estrada for plunder for allegedly conniving to funnel pork barrel funds to fake non-governmental organizations (NGOs) of mastermind Janet Lim Napoles. These players supposedly split the loot from the multi-million peso development projects.

The report also recommended that the Senate committee on ethics and privileges investigate the allegations of plunder against the 3 senators.

“Allegations of plunder reflect deplorably on the dignity, integrity and reputation of the entire Senate as an institution. This Committee, having jurisdiction over ‘all matters relating to the conduct, rights, privileges, safety, dignity, integrity and reputation of the Senate and its members is duty-bound therefore to conduct a hearing to discipline its members,” the report stated.

Before the release of the report, Estrada already said that the Senate ethics committee is the proper venue to investigate the charges against him, not the blue ribbon committee. Estrada accused Guingona and Senate Majority Leader Alan Peter Cayetano of prejudgment and bias in the blue ribbon probe.

The Senate though has yet to organize the ethics committee 8 months after the start of the 16th Congress.

Senate President Franklin Drilon has admitted that the Senate leadership is having a hard time choosing the chairperson because senators do not want to take on the “sensitive” post.

‘Breach of duty to the public’

While the lawmakers blamed the implementing agencies for the loss of taxpayers’ money, the report held the 3 senators liable for “fundamental failures in the handling of these funds.”

The report identified the following lapses of the 3 senators:

1. Legislators did not take prompt action to stop the scam.

The report noted that the legislators did not deny that they or their staff signed pork barrel documents endorsing bogus NGOs and even confirmed the signatures to the Commission on Audit (COA).

“A person of ordinary diligence who discovers his or her agent’s illegal activities would have immediately informed the agencies involved to stop the payment of funds and abort the project. The principal would then investigate and terminate the erring agent. A person who fails to take action within reasonable time probably directed the illegal activity or simply tolerated it …. In either case, the principal is legally bound by the acts of his or her agent,” the report stated.

The report said the senators cannot “insulate themselves from blame or prosecution” by using their staff an excuse.

“Even if we assume, for the sake of argument, that the agents acted outside the scope of their authority, then there was inexcusable negligence on the part of the legislator for entrusting a large amount of State funds to an incompetent agent.”

2. Legislators interfered in the implementation of projects.

The report also took legislators to task for their “unnecessary interference” in the implementation of projects.

The report though also found implementing agencies liable for lapses, rejecting their “Pontius Pilate” washing of hands of any responsibility.

3. Legislators did not check legitimacy of NGOs.

The report said the scam shows that legislators were unwilling or unable to check the legitimacy of the NGOs but still endorsed bogus foundations.

“Without this accountability, they should not be the proper offices to recommend such projects in the first place. The foremost task of a legislator is to make laws and not to implement government projects.”

The report said the senators committed a “glaring act of carelessness” by failing to verify the legitimacy of the NGOs. It added that verification was the “minimum standard of due diligence” that the lawmakers could have done.

Guingona said that the senators should have observed the constitutional principle that public office is a public trust.

“The disbursement of millions upon millions of taxpayers’ money is imbued with public interest. Failure to verify the legitimacy of these NGOs is no less than a breach of duty to the public.” – Rappler.com