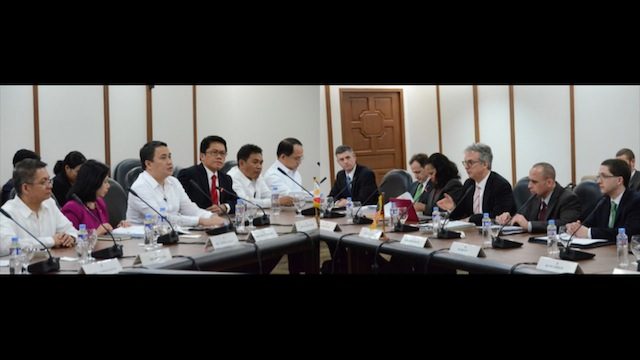 MANILA, Philippines – Malacañang believes the Enhanced Defense Cooperation (EDC), which will allow the increased presence of American troops in the country, is constitutional and is not being rushed for US President Barack Obama’s visit.

In a radio interview on Saturday, April 12, deputy presidential spokesperson Abigail Valte said the Philippine negotiating panel is undertaking consultations and “would be the best individuals to brief our legislators on what has already happened…at least on the draft key provisions.”

“The panel has always been cognizant of the concerns that have been raised by the President (Aquino) and everytime they go through a round of negotiation, they consult with the President, and the President reiterates the need to do it within the 1987 Constitution. It should be within the existing framework that we have,” Valte said.

Earlier, Senator Miriam Defensor-Santiago said the agreement that would give the Americans wider access to the Philippine military bases should undergo Senate ratification.

But Malacañang said the Mutual Defense Treaty and the Visiting Forces Agreement between the two countries were already ratified by the Senate.

Malacanang also clarified the agreement is not intended to be signed during Obama’s visit to the country from April 28 to 29.

The negotiating panel’s preparation of a draft agreement for submission to President Benigno Aquino III, following the conclusion of the 8th round of talks on Friday, raised speculations that the deal could be ready in time for the Obama visit.

Valte said there is no deadline to finish the agreement, and that the instructions of the President were simply to make sure that everything is laid out well and that nothing is forgotten.

“Defense Undersecretary Pio Lorenzo Batino said the draft provisions and the key points would be submitted for internal review for the Philippine side and, of course, consultations will also continue,” Valte said. – Rappler.com