Drilon: Napoles probe must not be ‘witch hunt’ 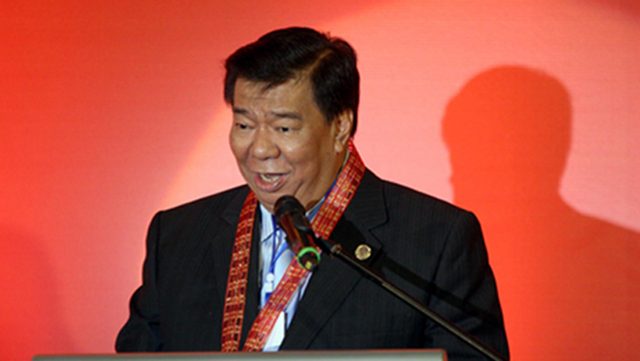 MANILA, Philippines – Are administration allies next?

Months after photos of him with Napoles surfaced, Drilon said the prosecution of officials involved in the scam must not turn into “unlimited opportunities for mudslinging.”

“I understand that this issue provides a lot of opportunities for political attacks. But we should not muddle the issue by embarking on witch hunts and black propaganda and ruin the sincere efforts to find the truth and render justice,” said Drilon in a statement on Wednesday, April 23.

“When anyone becomes a target of propaganda attacks, it is their reputation – their very integrity – that is wrongly put at stake,” he added.

Reports surfaced that Napoles named 19 senators but her lawyer denied this. Former Senator Panfilo Lacson, who met with Napoles’ husband and children last month, said she identified at least 13 senators in her draft affidavit.

A staunch ally of President Benigno Aquino III, Drilon said he supports the prosecution of corrupt officials but called for an “atmosphere of sobriety.”

“What is important is we remain rational and circumspect while we search for the truth, and until we have put the perpetrators in jail. A sober approach on this controversy is of paramount importance, in order for this process to be successful.”

Drilon was first linked to the scam in September 2013 because of the release of photos showing him and his wife with Napoles and her husband. He then said he only knew her after seeing her in social events “less than 10 times.”

The LP’s campaign manager in 2013, Drilon drew flak for initially refusing to sign a subpoena for Napoles to appear before a Senate investigation.

Napoles’ decision to “tell all” came just days after a Pulse Asia survey showed that Drilon had regained the decline in his popularity over the controversy. In his statement, Drilon said pursuing justice “should be blind to political colors.”

“The quest for justice must spare no one no matter their affiliation, and even the administration lawmakers and allies of the President must be covered by the investigation and its eventual prosecution,” said the former justice secretary.

Yet Drilon also stressed that charges must have basis, and the accused should be given the opportunity to defend themselves.

“All charges must be supported by compelling and undeniable evidence, and they must be laid out and presented to the court and to the public.”

“It is only through our courts and the country’s justice system that we can achieve the genuine truth and justice rightfully demanded by our people. I invite everyone to help us in this just cause,” Drilon said.

Drilon’s message echoed what the opposition senators have long been saying: that justice must not be “selective” and the accused should be allowed to present their defense in court.

Estrada and Revilla decried the allegations against them as “selective justice.” The opposition senators have called for the investigation of Aquino allies named in the Commission on Audit (COA) report as having endorsed questionable non-governmental organizations as recipients of their pork barrel funds.

Estrada, Revilla and Enrile face plunder charges for allegedly conniving with Napoles to siphon off their development funds to her fake non-governmental organizations in exchange for kickbacks. – Rappler.com