May 20, 2012 5:02 AM PHT
Facebook Twitter Copy URL
Copied
China criticizes a US Defense Department report about the Chinese military and its assertiveness in the South China Sea

MANILA, Philippines – China is raising a howl over the United States’ supposed “distortion” of reality in its latest report about the Chinese military and its heightened presence in the South China Sea, among other things.

Chinese Foreign Ministry spokesperson Hong Lei on Saturday, May 19, called the US report “irresponsible” amid what could be a proxy war between the US and China in portions of the South China Sea, which include the disputed Scarborough Shoal.

Criticizing the US report, Chinese state media singled out a line that supposedly alluded to China’s approach toward South China Sea disputes. 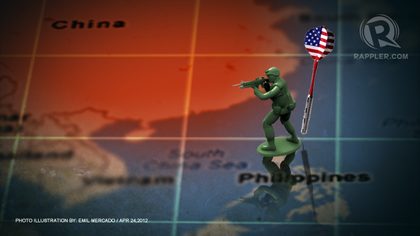 “With its growing power and international status, China periodically acts more assertively in pursuit of its strategic priorities, while also seeking to take advantage of a favorable external environment to pursue economic and military modernization goals,” the Pentagon said in its report released Friday, May 18.

While the Pentagon report never mentioned the South China Sea in the section referred to, the state-run China Daily said it makes “an apparent reference to China’s firm stance on protecting its sovereignty and territorial integrity in disputes concerning the South China Sea.”

“As a champion of good-neighbor diplomacy, China has been aspiring for peaceful development. When it comes to issues of sovereignty and national security, China stands firm just like any other member of the international community. What’s the fault in that?” said a report by the state-run agency Saturday.

Hong said China is developing its “limited” military force only to protect China’s independence, sovereignty, and territory. “So long as a country is not hostile to China, it will show no doubt or worry over such development,” he added.

Hong also said the US should “respect facts, change its mindset, and stop its wrongdoing in issuing similar reports year after year.”

A US defense official, for his part, said the Pentagon report shows points for cooperation between Washington and Beijing. (Read the full report below)

David Helvey, US acting assistant secretary of defense for East Asia, cited opportunities for Chinese ships and crews to cooperate with global partners to end piracy, for example. The two countries can also do humanitarian and disaster relief exercises together, Helvey said.

“There’s an opportunity for China to partner with us and with other countries to address the types of challenges that we all face in the 21st century,” he explained.

The South China Sea issue has come to the “direct attention” of China’s leadership due to “the perception the US has been taking advantage of the situation to strengthen its presence and its alliances in the region,” according to a recent International Crisis Group report.

Almazan cited, among other things, a recent report “that an amphibious landing task force consisting of 5 of China’s most powerful worships had deployed to the Philippine Sea.” “Although positioned in international waters the task force can deploy at a moment’s notice to Scarborough Shoal which is only two day’s hard sailing away,” he wrote.

Almazan also gave a different interpretation of China’s fishing ban in the South China Sea: “a sign that China wants the area cleared of Chinese civilian vessels in the event it launches naval offensive operations.”

The Scarborough Shoal standoff is now entering its 6th week, with both the Philippines and China still scrambling for a diplomatic solution to the dispute. – Rappler.com