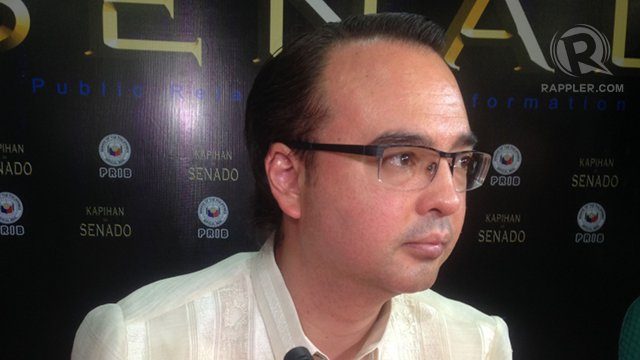 MANILA, Philippines (UPDATED) – “Accusations are part of my lunch and dinner. As long as the accusation is not true, there is no problem.”

Cayetano and Escudero said they are ready to respond in case Napoles implicated them in the the worst corruption scandal in recent history. The two said withholding the names of the reported 12 senators and over 100 congressmen will cast doubt on all legislators.

“I’m concerned for the institution. ‘Pag naubos ang mga senador, constitutional crisis iyan. I’m not concerned about myself kasi wala akong nilagay doon,” Cayetano said in a press briefing on Thursday, April 24. (If all the senators are charged, that’s a constitutional crisis. But I never gave money to her non-governmental organizations.)

Senate President Franklin Drilon though said the list must not be released without supporting documents. (READ: Drilon: Don’t release Napoles list without docs)

Even if he was named in the Commission on Audit (COA) report for pork barrel fund releases that violated the procurement law, Cayetano said this should not be used against him.

“The opposition keeps saying that there are names in the COA report that should be investigated, which is wrong. Just because you’re in the COA report does not mean you gave money to Napoles NGOs. When the COA says it’s irregular, that includes both those who stole money and those who did not follow the rules,” Cayetano said.

Escudero said he does not understand why De Lima and Lacson would not release the affidavit and opt to verify it first. The lawyer said the two officials cannot change the contents of Napoles’ affidavit anyway even after investigating it.

“Whatever comes out of her affidavit, I can defend myself. Whether I am mentioned or not, I know the truth. All of the whistleblowers have spoken, even the COA, that not once did I give funds to her NGOs. That is so difficult to reverse just because of the statement of one person,” Escudero said in a separate interview on radio DWIZ.

Lacson said, however, that the transactions Napoles narrated in her affidavit were not limited to the pork barrel but also included budget insertions, savings, and other types of funds released to lawmakers.

He said even “noisy” senators who criticized the scam were named in the affidavit.

The senators are reacting to the sudden turnaround of Napoles, who told De Lima and Lacson that she is willing to tell all.

Napoles and opposition senators face plunder charges for allegedly conniving to funnel pork barrel funds to her bogus NGOs, and splitting the cost of the ghost projects as kickbacks.

“We will wait for Secretary De Lima to finish documenting the supposed disclosure of Janet Lim Napoles. Upon receipt of the affidavit of Janet Lim Napoles by the Blue Ribbon Committee, the same will be evaluated before we make the final decision,” Guingona said in a statement.

An ex-officio member of the committee, Cayetano disagreed with Guingona. He said the chairman did not consult him and he believes Napoles should be invited to a hearing as soon as possible.

“This isn’t an ordinary case. This isn’t a case where a few more days or a week will not matter. This is a case where every second a name is not released, everyone becomes a suspect….It’s beyond us. [Napoles] should be made to face the public,” Cayetano said.

Cayetano and Escudero added that they were open to suggestions that Enrile’s former chief of staff and alleged conduit, lawyer Jessica Lucila “Gigi” Reyes, along with Napoles, be invited to a Senate hearing  so the two women could respond to the allegations.

‘Napoles should not go scot free’

Cayetano and Escudero echoed the concern of some their colleagues and the whistleblowers that Napoles might just end up muddling and weakening the prosecution’s case.

Escudero said the justice department should carefully assess Napoles’ statements and any bid for immunity because she is “slightly (medyo) a polluted source.”

“She already lied to the Senate and the public once. How can we trust that she is saying the whole truth and without any lies now?” Escudero asked, referring to Napoles’ November 2013 testimony where she denied knowledge of the scam.

Escudero added that Napoles will have a hard time becoming a state witness because she appears to be the most guilty, and her statements contradict those of the whistleblowers.

Cayetano said Napoles’ statements should be backed up by documents, and be independently verifiable. He said with all the information that came out, there is no need for her testimony.

Still, Cayetano said he understood why the administration is open to hearing out Napoles. He again claimed that Vice President Jejomar Binay will protect his accused opposition allies if he wins as president.

“The administration is concerned with 2016. This case will drag on and there will be a political solution with a new president. Even if the case is strong, they just want to make it stronger,” Cayetano said.

Cayetano and Escudero said they were not afraid of the impact of the new revelations on the Senate, calling it part of the “cleansing process.”