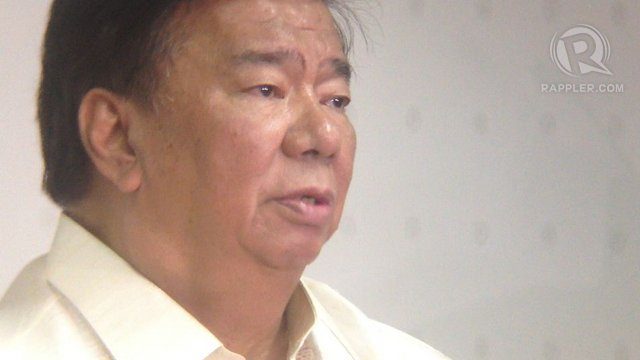 Facebook Twitter Copy URL
Copied
'No other evidence is better than the document because documents do not lie,' says the former justice secretary

MANILA, Philippines – “Documents do not lie.”

Unlike some of his colleagues, Drilon opposed the release of the list of the reported 12 senators and over 100 congressmen without supporting documents.

(If it is just a list, let us please take care of the Senate as an institution.)

Senators Alan Peter Cayetano, Francis Escudero and Antonio Trillanes IV have called on Justice Secretary Leila de Lima and former senator Panfilo Lacson to release the names of the lawmakers so that they can defend themselves, and to avoid casting doubt on all legislators.

Drilon though again warned against “mudslinging and smear campaigns,” reiterating a statement he issued on Wednesday.

The staunch ally of President Benigno Aquino III said there are “many text messages circulating” that his name was included in the list of the 19 senators Napoles allegedly named.

“I guess they are at it again. These are the black propaganda operators who were doing the same thing last year. They have been tapped to muddle the issue by spreading lies and baseless accusations,” he said.

The Senate President was referring to the release of his photos with Napoles in September 2013, which sparked questions about his and other administration allies’ ties with the alleged mastermind. He later drew flak when he initially refused to sign a subpoena for Napoles to appear before the Senate investigation on the scam.

Drilon reiterated that he never endorsed any non-governmental organization of Napoles as a recipient of his Priority Development Assistance Fund (PDAF).

“My name is not and will never be in any list because I have not assigned a single peso of my PDAF to any NGO of Mrs Janet Napoles. The only NGO that I have been working with for the past several years is the Federation of Filipino Chinese Chambers of Commerce where we build schools around the country at half the cost of government contractors.”

“I can account for ever peso of my pork barrel. That is why I am very confident and strong in my statement that I am not in any list. I have not utilized NGOs charged to be fake,” he added.

The Senate leader said he already released the list of his PDAF allocations in October 2013, and it is up to his colleagues to do the same to clear their names.

Drilon also responded to Lacson’s statement that the list involved the use of funds other than PDAF like budgetary insertions and savings.

“I can say that with confidence. None of them went to any questionable NGO,” he said.

Drilon’s statements come after Napoles reversed her initial denial and offered to “tell all” about the scheme. She approached both De Lima and Lacson and gave them names, details and dates about the worst corruption scandal in recent history.

There are reports Napoles also named administration allies in her affidavit.

‘Best evidence is the document’

“Under the rules of court and under our rules of evidence, where the subject of the inquiry is the content of the document, the best evidence is the document. No other evidence is better than the document because documents do not lie,” said Drilon.

“The implication must be supported by substantial, substantive documentary evidence,” he stressed.

What if Napoles produces documents to back up her claims? Drilon said, “That’s theoretical. I don’t want to answer that.”

Some senators and whistleblowers expressed fear that Napoles will weaken the prosecution because her statements clash with those of the witnesses. Napoles’ lawyer said she is not the scam mastermind, contrary to the whistleblowers’ testimony.

Asked to assess Napoles’ credibility, he said, “I do not see all of the evidence. I am a former secretary of justice. I have to be precise in my statements. I have not examined all the evidence available.”

Drilon said he leaves it up to the Senate blue ribbon committee to decide whether or not to summon Napoles again. He added that there is no assurance Napoles will not engage in finger-pointing.

“You can never be sure that is why [chairman] Senator [TG] Guingona said he wants to examine the affidavit first before making a decision as to whether Napoles should be summoned again,” he said.

Drilon again said that politics must not get in the way of finding out the truth.

“Those who have plundered the nation’s coffers should be put to jail and their political affiliation – their pedigree – should never be a consideration.” – Rappler.com