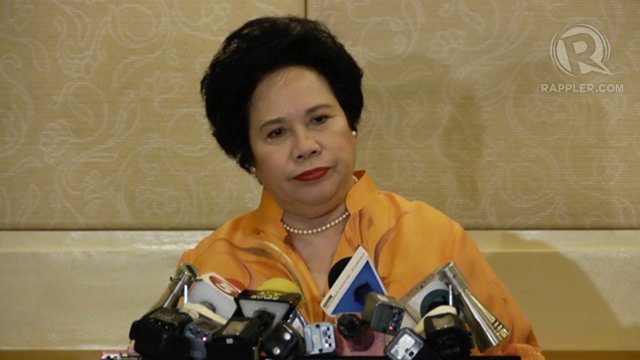 Facebook Twitter Copy URL
Copied
Criticizing what she calls 'guile in diplomacy,' Senator Santiago says the agreement should first have been submitted to the Senate

MANILA, Philippines – “I feel as if I have been slapped, or ordered to melt into the wallpaper.”

Senator Miriam Defensor Santiago took strong exception to the signing of a military deal between the Philippines and the United States without Senate approval.

Just hours after the ceremony, the chairperson of the Senate foreign affairs committee criticized the signing of the Enhanced Defense Cooperation Agreement (EDCA) even before copies are released to lawmakers and the public.

“This is an unfair surprise on the Philippine Senate which, under the Constitution, shares the treaty-making power with the President.  All the while, the Committee on Foreign Relations, of which I am chair, expected that any such Agreement would be signed by the two Presidents,” Santiago said in a question-and-answer primer her office released on Monday, April 28.

She said the signing of the deal was a sign of bad faith and “guile.” Defense Secretary Voltaire Gazmin and US Ambassador to the Philippines Philip Goldberg signed the agreement hours before the arrival of US President Barack Obama in Manila.

“There was no hint that the Agreement has been downgraded, for signature not by the two Presidents, but only by the defense secretary and the American ambassador in Manila.  This contretemps does not indicate good faith on the part of the two Presidents,” Santiago said.

“The use of guile in diplomacy should be limited to state-to-state situations, and should not include a situation involving only two branches of the same government.”

Santiago echoed the concern of former senators who voted to close down US bases in 1991: that the deal lacked transparency, and that the Senate should not have been kept in the dark.

Other senators including leaders and administraton allies Senate President Franklin Drilon and Senate President Pro-Tempore Ralph Recto told Rappler that they too did not get a copy of the deal.

Yet Senate defense committee chairman Antonio Trillanes IV said the executive branch briefed his panel about the agreement. Senators are also divided on whether or not the deal requires their concurrence. (READ: Was Senate sidelined in PH-US military deal?)

The agreement gives US troops increased access to Philippine military bases, and allows them to construct facilities and store equipment in these bases, with consent of Philippine officials. (READ: PH primer on military pact with US)

Under the 1987 Constitution, the Senate must concur with treaties that the President ratifies. The charter states that foreign military bases shall not be allowed except under a treaty duly concurred in by the Senate.

Section 25, Article XVIII of the Constitution reads as:

“After the expiration in 1991 of the Agreement between the Republic of the Philippines and the United States of America concerning military bases, foreign military bases, troops, or facilities shall not be allowed in the Philippines except under a treaty duly concurred in by the Senate and, when the Congress so requires, ratified by a majority of the votes cast by the people in a national referendum held for that purpose, and recognized as a treaty by the other contracting State.”

The executive branch’s position is that the agreement does not provide for US bases, and merely implements past treaties and deals: the 1951 Mutual Defense Treaty and the 1999 Visiting Forces Agreement.

Below is the full primer of Santiago, detailing her arguments on why the Senate should have been involved in crafting the agreement, and its implications on Philippine law and foreign policy:

Q: Is the agreement a positive development for the Philippines?

Obviously, I have no basis for assessing whether the Agreement is positive for my country.  The Senate has not been given the courtesy of being furnished with a copy.  Instead, allegedly it has been announced that copies will be released by Thursday, or four days later after the Obama visit.  I feel as if I have been slapped, or ordered to melt into the wallpaper.

Q: Will the Philippines be beholden to U.S. interests because of this agreement?

In an age when states collide no longer because of ideology, but because of geopolitics, I no longer worry that the Philippines might become beholden to American interests.  From the time of the American colonial regime in my country, American business and military interests have always dictated American policy with respect to all countries, including PH.  America cannot have it both ways.  It cannot tie down the Philippines to a mutual defense treaty, and yet hope that it will not ruffle the feathers of China.

The US should not continue to treat the Philippines as a satellite state, while aiming to remain on good terms with China, which has been seizing the initiative in Asian maritime territorial disputes.  The 3 top economies in the world consist of the U.S., China, and Japan.  It is understandable why PH is being treated so shabbily.

Anyway, the militant left will certainly bring the issue to the Supreme Court.  For me, the constitutional issues are very interesting.

Q: Will the EDCA further antagonize the Philippines’ ties with China?

Definitely the new Agreement, whatever it may contain, will further antagonize China because in effect, we consent that the Philippines should be listed under the American column, instead of the China column.  If China reaches out to Russia while the Ukraine issue continues to simmer, the U.S. will certainly call on the Philippines to fulfil the treaty obligation under the PH-US Mutual Defense Treaty.

The Philippine executive branch apparently adopts the attitude that the Mutual Defense Treaty (MDT) will oblige the U.S. to automatically come to the aid of the Philippines if attacked by China.  I respectfully dissent.  For one thing, the MDT does not define what is a “metropolitan territory” of each state.  For another thing, the MDT provides that U.S. will come to the aid of the Philippines only after the issues has been passed through U.S. constitutional processes, meaning that it is subject to open-ended debate in the US Congress.

Here are Santiago’s responses to interviews done before the deal was signed:

Q: What is the main point that Filipinos should think about when it comes to this agreement with the US?

Filipinos should keep uppermost the supremacy of the Philippine Constitution.  We should not accommodate any foreign power at the cost of the sovereignty of our Constitution, even if the problem is presented as if it were a problem of national survival.

Q: Do you think the agreement is fair or only serves American interests?

The proposed Enhanced Defense Cooperation Agreement has marginal advantages for the Philippines, but the major advantage will be gained by America.  If the Philippines signs the Agreement, then America could claim that she has “contained” China, because the Asian countries involved – including the Philippines – are now bound by their respective agreements with America.  It would make the Philippines sound as if we are a satellite ally of America.

Q: What are your concerns about this agreement?

Primarily, my concern is that pro-US sectors will cooperate in closing their eyes to the clear meaning of the Philippines Constitution that an Agreement requires the concurrence of the PH Senate, and that the constitutional policy against nuclear weapons will also be fudged.  There are at least three constitutional provisions in danger of being violated.  If this turns out to be true, then the Agreement would set an extremely bad precedent.  Thus, it would be a case of interpreting the Constitution to accommodate the military program of a foreign state.  That eventuality defies all principles of constitutional supremacy.

Q: The issue of defense is on top of President Obama’s agenda when he visits the Philippines.  Until now, the Philippine public remains clueless to the details of the new defense agreement with the US.  Do you think the government is hiding something from the public?

Q: What are the issues connected to the agreement that we should look out for, or be wary about?

Q: Do you think that the Philippines has a legitimate concern towards China, or is it just being exaggerated to scare the Filipinos into signing this defense agreement with the US?

Definitely, the Philippines has a legitimate concern over China maritime expansionism.  The West Philippine Sea is rich with oil, natural gases, and seabed mineral resources.  All these resources belong to the Philippines.

Q: Do you think the Philippines is being dragged into another proxy rivalry between the US and China?

This is not necessarily a proxy rivalry.  Instead, it is a clear case of America attempting to walk a fine balance between China and Russia.  The more important question is credibility.  How credible is this pivot or rebalance program?  Is the Obama administration willing and able to approve the bigger defense budget that it entails?

Q: When the Philippines faced off with China over Ayungin Shoal, the US mediated and secured agreement for the two parties to withdraw.  The Philippines did, but China reneged on the deal.  Given the US’s interest in China, will it come to the defense of the Philippines in case of conflict?

In case of conflict, the US will come to the defense of Philippines, only if it serves the interest of the US.  If not, the US will finesse the situation and in that sense would be unreliable.

Q: On the possible Constitutional issues the agreement would face

There are at least three clear constitutional provisions that militate against the Agreement:

2.     “No treaty or international agreement shall be valid and effective unless concurred in by at least two-thirds of all the Members of the Senate.”  (Art. 7, Sec. 21.   Emphasis added.)

3.     “The Philippines, consistent with the national interest, adopts and pursues a policy of freedom from nuclear weapons in its territory.” (Art. 2, Sec. 8)

Q: Is the agreement aimed towards the best interest of the Philippines?

The Agreement is not automatically an asset for my country.  One, actuations by U.S. troops in Philippine territory might trigger charges of aggression from China, and consequently, the Philippines might be named as an alleged perpetrator in the crime of aggression.  Another aspect is the military aid apparently promised to the Philippines, which I understand to be some $50 million.  If this is correct, these are beggar’s alms.  And it is doubtful if even this paltry sum will materialize, because of reported cutbacks in the US defense budget.

Q: Will attempts to block the agreement have a negative impact on PH-US relations?

I don’t believe that blocking the Agreement will automatically result in a deterioration of Philippine-US relations.  The U.S. will always act on the basis of its own self-interest.  It cannot afford to be onion-skinned in this area of the world which, at this time, is described as the “Pacific Century.”

Q: What do you think the critics will do after the US and PH sign the agreement?

Should the two Presidents sign what in effect would be an executive agreement – bypassing the Senate – definitely, militants in PH civil society will petition the Supreme Court to invalidate any such Agreement.  That would be a contretemps in diplomacy. – Rappler.com