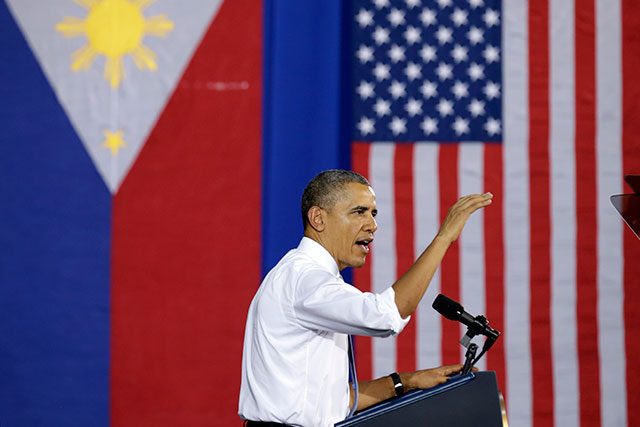 Facebook Twitter Copy URL
Copied
'Our commitment to defend the Philippines is ironclad and the United States will keep that commitment, because allies never stand alone,' Obama tells an audience of US and Filipino soldiers

MANILA, Philippines – Before wrapping up his 2-day state visit in Manila, US President Barack Obama on Tuesday, April 29, gave Filipino troops an assurance of the “ironclad” commitment of the US to help defend the Philippines against “external armed attacks.”

The statement comes after Obama on Monday evaded a question on how the US would defend the Philippines in the event that the current tension with China turned into an armed conflict. (READ: No categorical commitment from Obama on China dispute)

“Let me be absolutely clear.  For more than 60 years, the United States and the Philippines have been bound by a mutual defense treaty.  And this treaty means our two nations pledge – and I’m quoting – our “common determination to defend themselves against external armed attacks, so that no potential aggressor could be under the illusion that either of them stands alone.”

“In other words, our commitment to defend the Philippines is ironclad and the United States will keep that commitment, because allies never stand alone,” Obama said in a televised speech before Filipino and American soldiers in Fort Bonifacio, Taguig, headquarters of the Philippine Army.

Obama chose to spend Day 2 of his visit to Manila by recognizing the longstanding military cooperation between the Philippines and the US. There used to be tens of thousands of American troops in the Philippines until the Senate voted in 1991 to evict them. The military ties continued, however, through the 1951 RP-US Mutual Defense Treaty and the Visiting Forces Agreement.

Obama cited in his speech how Philippine and American troops fought together under the American flag to defend Bataan and Corregidor during World War II. He asked the audience of US and Filipino troops to stand up to pay tribute to Carolina Garcia Delfin who served as a military nurse back then.

He also lamented the “injustice” to Filipino war veterans.

“Sadly, the proud service of many of these Filipino veterans was never fully recognized by the United States. Many were denied the compensation they had been promised.  It was an injustice,” Obama said. (READ: America’s second-class veterans)