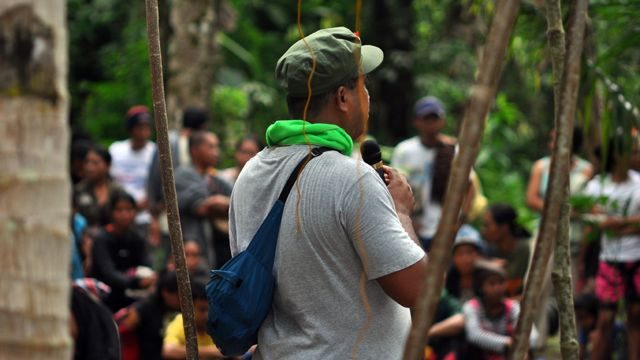 Facebook Twitter Copy URL
Copied
The New People's Army says the military got the wrong guy, alleged to be an NPA leader

On Saturday, May 3, the Eastern Mindanao Command of the Armed Forces of the Philippines (AFP) announced the capture of Armodia, identified as the secretary of the NPA’s Front 72.

Front 72 operates in the quad-boundaries of North and South Cotabato, Davao del Sur and Sultan Kudarat.

The NPA is the armed wing of the Communist Party of the Philippines (CPP).

Rebel spokesman “Ka Efren” of the Far South Mindanao Regional Party Committee of the CPP said in a phone interview that Armodia is “safe with our comrades in the guerrilla front.”

On Friday, May 2, authorities arrested local anti-mining activist Romeo Rivera in South Cotabato for his alleged participation in the communist movement.

“He was responsible for the series of attacks on plantations and construction firms in the region that do not give in to their extortion demands,” Caber said.

Rivera is now under the custody of police in Digos City, Davao del Sur, while waiting for the trial of his cases. But Rivera’s family and local activisits insist the arrest was a case of mistaken identity.

Emily Lopez of environmental group Panalipdan said the 52-year-old carpenter is a member of their group and is widely known in Tampakan for his involvement in the anti-mining campaign.

Rivera, along with the Panalipdan network, opposed the large-scale mining in Mindanao, particularly against XSTRATA-SMI in South Cotabato, Sarangani and Davao del Sur.

Lopez also said that contrary to reports, Rivera was not arrested but was abducted by intelligence operatives in his residence in Koronadal City.

Ka Efren said Rivera was either mistakenly abducted or the intelligence units that nabbed him utterly failed in their information.

“They want to make up for the Matanao raid where they suffered heavy losses,” Ka Efren added.

The military tagged Armodia as the leader of some 100 NPA guerrillas who launched simultaneous attacks in Matanao in Davao del Sur in March.

Three policemen were killed when the rebels overran the town’s police station, carrying away 7 M-16 Armalite rifles and 3 service pistols from the policemen.

The guerrillas also detonated a land mine, hitting a military truck that was sent to reinforce the policemen.

Nine soldiers and two rebels were killed in the land mine explosion. – Rappler.com