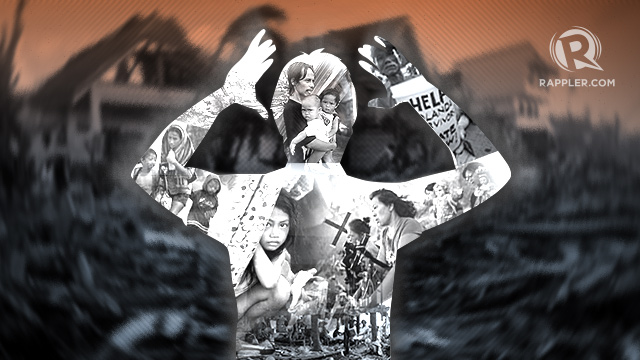 “Six months after the event, we are seeing the emergence of mental health problems in communities with people coming to terms with the enormity of their loss, whether of loved ones, homes or livelihoods,” Dr Julie Hall, World Health Organization (WHO) country representative said on Friday, May 2.

It was one of the first health issues that cropped up just days after the killer typhoon ravaged parts of the Visayas last Nov 8, 2013, leaving along its path thousands of bodies killed by strong winds, flood waters, falling debris, or trauma.

But experts say the emergence of mental health problems even months after is normal during disaster situations.

Dr Bernardino Vicente, director of the National Center for Mental Health, told Rappler that there are victims who experience these only once they have settled “in a safe place.”

“Life-saving events sometimes hold you back [from] feeling symptoms of mental disorder. Sometimes you don’t feel it [immediately because] there is a need to save lives [and] escape. When they’re in a safe place, that’s the time they experience headache, insomnia,” Vicente said in a mix of English and Filipino.

Dr Ruth Foxwell, team leader of disease prevention for WHO Philippines, said there is usually an increase in the number of people who report having mental health problems in between 3 to 6 months after a disaster.

“The population is usually very resilient. However, after catastrophes [and] major disasters, [they] need extra assistance,” she added.

There are two possibilities why mental health problems emerge months after the tragedy.

Aside from the trauma caused by an unprecedented disaster like Yolanda, the typhoon also washed out maintenance medications needed by patients who already have mental health problems.

Non-maintenance, Vicente said, could cause a relapse.

“A lot of people had problems accessing their medication [and] health facilities…WHO, DOH [Department of Health] and other health partners have been actively looking for people who [were] previously…on medication,” Foxwell also said.

According to Vicente, common mental health problems after disasters include post-traumatic stress disorder, depression, and anxiety.

Vicente said mental health services are not integrated in primary health care, so other non-governmental organizations are helping out to develop capacity to provide these services.

“Logistically, we provide the free medicine,” he added. NCMH is a DOH hospital and the leading mental health care facility in the country.

Soon, though, mental health services could be a staple in rural health units.

He said there are proposals to include a community mental health office and an activity area in every rural health unit. Currently, a basic unit only has a doctor’s office, an examination room, and a conference room.

The proposed rooms can be used for psychosocial processing, debriefing, and mental health forums for the community.

“[If you are] depressed, where will you go? Infrastructure-wise, we want that in place,” Vicente added.

If there’s anything the Yolanda rehabilitation efforts have shown, it’s that mental health is just as important as physical health – not only for victims, but even for first responders and local leaders. (READ: Therapists help dazed survivors)

“Preparing for a disaster, taking care of your team, crisis management, and dealing with organizational crisis is also important. For people not to be burned out, [you need a] balance of work and play,” Vicente said.

He also admitted the government cannot deal with the emerging mental health issues alone, especially with the shortage of mental health practitioners in the country.

“There are only about 500 Board-certified psychiatrists, and there’s no equitable distribution. [I’m] banking on local health workers, primary physicians, rural health nurses, [and] midwives [to] assist in mental health services,” he said.

Most of these psychiatrists, he noted, are based either in Metro Manila, Metro Cebu, or Metro Davao.

WHO is already identifying other Yolanda-hit municipalities still in need of assistance, Foxwell said.

After 6 months, Hall said “real progress” has already been made, but the resilience of the Filipino spirit “will not be enough.”

“Ensuring the resilience of the health infrastructure, universal health care for all Filipinos, and continued investments in health promotion are all required,” she added. – Rappler.com