CJ will stay in hospital, to skip trial 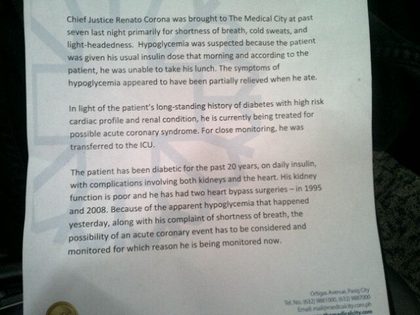 MANILA, Philippines (3rd UPDATE) – Doctors said Wednesday, May 23, that Chief Justice Renato Corona is being closely monitored due to possible heart attack, and they’re recommending that he should stay in the hospital for 48 more hours.

This means Corona will be unable to return to the witness stand Wednesday.

Corona was brought to the hospital early Tuesday evening, May 22, for “shortness of breath, cold sweats and light-headedness,” the medical bulletin issued to reporters said. “Hypoglycemia was suspected” because while he took his usual insulin dose in the morning, he claimed to have missed his lunch, the bulletin added.

It described Corona as a “diabetic for the past 20 years, on daily insulin.” Corona’s kidney function is “poor,” the bulletin said, noting that he’s had two heart bypass surgeries.

Shortly past midnight Tuesday, Supreme Court spokesman Midas Marquez said the Chief Justice was brought to the ICU due to a possible heart attack.

Marquez’s father-in-law, Dr Augusto P Sarmiento, is the chairman of the board of Medical City. Ramos however gave assurances that the bulletin was based on doctors’ findings.

Corona said he will return to the impeachment Court Wednesday, as ordered by Senate President Juan Ponce Enrile, according to Marquez.

“Pero makalipas ang ilang minuto, pagdating ko dito sa aking bahay, ay nakatanggap ako ng text message na mula sa pamilya na medyo nagkaroon ng bagong development, at siya ay inililipat sa ICU for a possible heart attack,” Marquez told dzMM radio. (But after a few minutes, when I got home, I received a text message from his family that there is a new development, and that he was transferred to the ICU for a possible heart attack.)

In a separate interview on ANC, the ABS-CBN News Channel, Marquez said he saw a “groggy” Corona at the hospital early Tuesday, May 22. He was under sedation then, he added.

“He asked me about the hearing tomorrow. I told him if he’s physically able to attend, it would be best because the senators are waiting for him,” Marquez said.

“I thought he would be alright already,” Marquez added.

On Tuesday, Corona walked out of the Senate session hall due to hypoglycemia, which is basically low blood sugar. Speaking to Rappler, a nephrologist said such condition is usually cured with a can of regular Coke.

The impeachment court had warned his counsels that he should return to the witness stand Wednesday, saying failure to do so would prompt it to strike off his testimony from the records.

The prosecution is set to put him under cross-examination.

– with reports from Paterno Esmaquel II and Natashya Gutierrez/Rappler.com