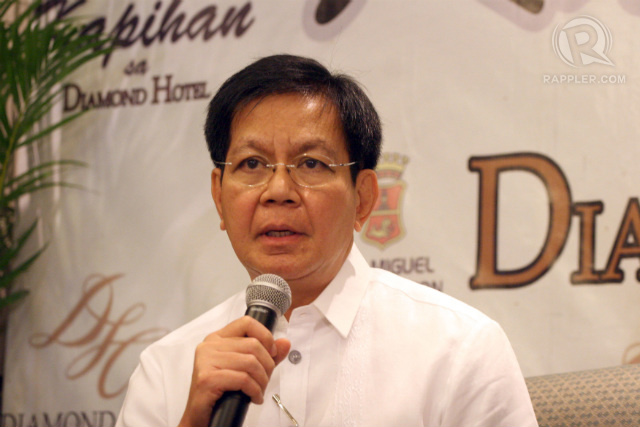 The following are the senators named in the list:

Abad also issued a strong denial of any involvement in the pork barrel scam or with Napoles, while Malacañang said the budget and agriculture secretaries still enjoy the President’s trust.

Strangely enough, the list provided by Lacson did not include Senator Miriam Defensor Santiago, one of the names he had confirmed during an interview with ABS-CBN on Monday night.

Besides lawmakers, the list names executive officials from the departments of agriculture, agrarian reform, and implementing agencies.

Several of the senators and congressmen on the list denied any link to Napoles and questioned the credibility of the list.

Besides the list, Lacson also submitted a copy of the unsigned draft affidavit of Napoles, and narration of events.

“I hope that these documents will assist the investigation being conducted by your Committee and address the clamor of our people for transparency in public service,” Lacson wrote in his letter to Senate blue ribbon committee chairman Teofisto “TG” Guingona III.

Lacson said that in March, Napoles’ husband Jaime and two children approached him and gave him a copy of the 3 sets of documents: unsigned affidavit, narration of events, and the list.

Napoles’ lawyer confirmed that the family gave Lacson the documents but said the list he has is incomplete. Napoles later met with Justice Secretary Leila de Lima and supposedly gave her a more complete version of the list. Guingona ordered De Lima to submit her own version of the list by Thursday.

Napoles faces plunder charges for allegedly conniving with top executive and legislative officials to siphon off their pork barrel funds to her bogus non-governmental organizations in exchange for kickbacks.

The following are the names in Lacson’s list.  Some of the names have symbols to indicate mispelled names (*), the deceased (RIP), and a (?) for the wrong agency.

State witness Benhur Luy, a former assistant of Napoles, said Lacson’s disclosure of the list on Tuesday was “premature” and “does not serve any legal purpose” but only to muddle up the issues.