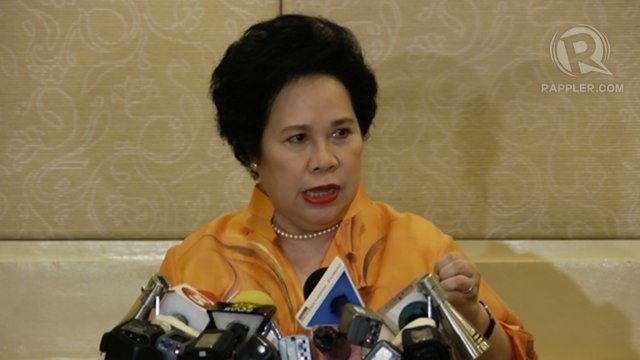 Facebook Twitter Copy URL
Copied
'Someone has made money by using my name, and I will make that person pay, big time,' Santiago says

Santiago took exception to her inclusion in the Luy list, which the Philippine Daily Inquirer reported on Wednesday, May 14.

While the constitutional law expert earlier said Luy’s list is admissible as evidence, she changed her tune after the witness said that she received a rebate from alleged scam mastermind Janet Lim Napoles.

“Someone has made money by using my name, and I will make that person pay, big time,” Santiago said in a statement on Wednesday. “The Luy list is nothing but mudslinging. How sad for our country that such villainy can come to pass.”

Luy’s records reportedly showed that Ducut received the rebate in behalf of Santiago.

The senator responded, “For the record, I denounce as false, the allegations against me drawn from the Luy list. All the documents are fake. I have no clue about the alleged details, which are all falsified or fictitious. I will confront Luy and Napoles, if they appear at the Senate.”

Calling Napoles and her aides a “gang of thieves,” Santiago said it turns out that the Luy list was not authenticated under the Rules of Court. She said the “Napoles Gang” forged public documents and used names like hers to “pad their in-house records.”

“My name has been used in vain by the Napoles Gang of thieves.  I thought that if the Luy list included documents, they would first be authenticated, before publication.  Silly me,” she said.

Napoles faces plunder charges for allegedly conniving with high-profile executive and legislative officials to siphon off pork barrel funds to her fake non-governmental organizations in exchange for kickbacks.

In a second statement subsequently released Wednesday afternoon, Santiago cited a report where Luy’s lawyer Raji Mendoza said his client had nothing to do with the release of the newspaper report. She hinted that her rival, Rehabilitation Secretary Panfilo Lacson had a hand in the release of the report.

“But if the list is unauthenticated, what is its paternity?  Notably, in today’s papers, Pinky Lacson is quoted as saying that I am not in the Lacson list but I am in the Luy list.  How would Lacson have known this, except by participating in faking, and then disseminating the Luy list,” Santiago said.

“As Alice in Wonderland said: ‘This is curiouser and curiouser.’”

A former trial court judge, Santiago explained why she thought that the Luy list as reported in the Inquirer is no longer admissible in court.

She said there are two kinds of documents admissible in court:

Santiago’s statement starkly differed from her pronouncements on Monday and Tuesday.

In requesting for the Senate to summon the Luy list on Monday, Santiago said Luy’s list could be admitted as “commercial lists and the like, which are considered admissible.”

In contrast to the Napoles versions of the list with Rehabilitation Secretary Panfilo Lacson, and whistleblower Sandra Cam, Santiago said on Monday that the Luy list would be “definitive and substantiated.”

Santiago said the Senate blue ribbon committee should allow “innocent senators” the right to meet witnesses, and secure the attendance of witnesses and the production of evidence.

“If such a confrontation materializes, I would consider it extremely unfortunate that, under the Constitution, I will not be allowed to use violence against those guilty of identity theft,” she quipped.

Santiago sought to make light of the corruption allegations against her.

“If corruption is this bad, maybe I should run for president, on the same anticorruption platform from which I have fulminated all these years.  And maybe I should deliver a privilege speech against you-know-who.  I understand that his official boss is vexed, because of the grandiloquent ambitions of this rogue in uniform.”

Another senator named in the Luy list, Senate President Franklin Drilon, was also quick to deny the allegations against him.

The Senate blue ribbon committee has yet to decide whether or not to summon Luy’s list. – Rappler.com