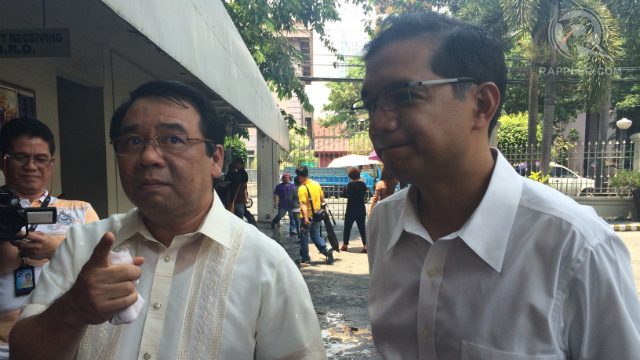 Facebook Twitter Copy URL
Copied
Petitioners allege that the JMSU violates the Constitution for not being able to follow a provision limiting who can partner with the government in exploring the country's natural resources
MANILA, Philippines – Former lawmakers of the Bayan Muna party list asked the Supreme Court (SC) on Thursday, May 29, to resolve once and for all a 2008 petition seeking to void the controversial yet expired Joint Marine Seismic Undertaking (JMSU).
In a 7-page motion for immediate resolution, petitioners before the SC argued that the agreement is “capable of repetition” if not voided.
“Notwithstanding the alleged expiration or lapse of the Tripartite Agreement on June 30, 2008, the instant case is exempted from the application of the ‘moot and academic’ principle,” their petition read.
Approved under the Arroyo government, the JMSU is an agreement among China, Vietnam, and the Philippines through their oil companies to jointly conduct research of petroleum resource material offshore. The offshore exploration covers both disputed and undisputed territories.
Filing the motion to have the original 2008 petition resolved were former Bayan Muna Representatives Satur Ocampo and Teddy Casiño. Casiño was accompanied by current Bayan Muna Rep Neri Colmenares to the SC docket.
Signed on September 1, 2004, the exploration pact was originally between China and the Philippines. Upon its protest, Vietnam was formally accommodated in the JMSU on March 14, 2005.
On May 21, 2008, then-incumbent Makabayan bloc lawmakers petitioned the SC to nullify the agreement. The JMSU lapsed on June 30, 2008.
Compromised territories
As the exploration agreement covers territories still disputed to this day, petitioners argued that the JMSU threatens the Philippines’ claim to these territories.
The petitioners explained that the areas for exploration “swallows” almost 80% of the Spratly Islands, the subject of a territorial dispute between China and the Philippines.
The petition was filed amid rising tension in the West Philippine Sea (South China Sea) among China, the Philippines and Vietnam.
The Philippines has filed a case against China before an international arbitral tribunal, accusing the Asian giant of illegally occupying its territories. Vietnam, on the other hand, recently accused China of sinking a Vietnamese fishing boat.
The agreement is unconstitutional
Petitioners allege that the JMSU violates the Constitution for not being able to follow a provision limiting who can partner with the government in exploring the country’s natural resources.
The following are the companies involved in the JMSU: the Philippine National Oil Company (PNOC), the China National Offshore Oil Co (CNOC), and the Vietnam Oil and Gas Corp (PetroVietnam).
The Charter provides that only Filipino citizens or corporations and associations with at least 60% ownership of Filipino citizens can enter into such agreements.
Petitioners cited Section 2, Article XII of the Philippine Constitution, which reads: “The exploration, development, and utilization of natural resources shall be under the full control and supervision of the State. The State may directly undertake such activities, or it may enter into co-production, joint venture, or production-sharing agreements with Filipino citizens, or corporation or association at least sixty per centum of whose capital is owned by such citizens.”
Expired or not, it’s disadvantageous
Petitioners also argued that the JMSU is disadvantageous to the country’s interests.
“Any joint exploration with any foreign country or entity that allows almost absolute control over the benefits of the exploration to such foreign country or entity is detrimental to the Filipino people and therefore must not be allowed,” their petition read.
While the pact already lapsed, petitioners argued that the data-sharing agreement outlined in the JMSU still puts the country at a loss.
“In addition, the Tripartite Agreement continues to have adverse and grave effects against the Republic of the Philippines subsequent to the alleged date of expiration or lapse of the Tripartite Agreement, such as the joint ownership by the PNOC, CNOOC and PetroVietnam of all the data and information gathered in the seismic work conducted in both the undisputed and claimed territories of the Republic of the Philippines,” read the petition.
Petitioners and respondents
Then incumbent congressmen, the complete list of petitioners in the 2008 case include: Satur Ocampo and Teddy Casiño for Bayan Muna; Crispin Beltran for Anakpawis; Liza Maza and Luzviminda Ilagan for Gabriela Women’s Party; and finally, Lorenza Tañada III and Teofisto “TG” Guingona III.
The petitioners asked for a temporary restraining order and/or preliminary injunction to halt the JMSU.
Respondents to the case include: former President Gloria Macapagal-Arroyo, her Executive Secretary Eduardo Ermita, her foreign affairs secretary, her energy secretary, the PNOC, and the Philippine National Oils Company Exploration Corporation.
(Read the full 2008 petition below)