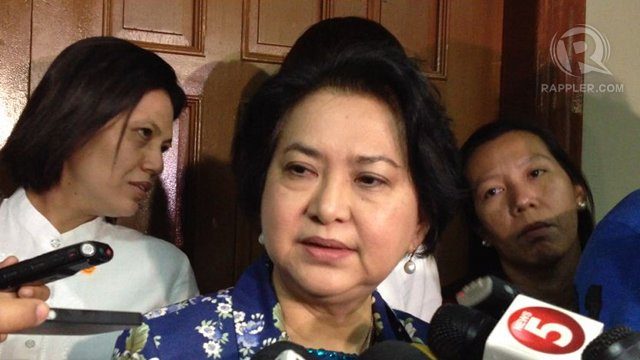 MANILA, Philippines – Rumored to be the bet of President Benigno Aquino III for the vacant Associate Justice post in the Supreme Court (SC), Commission on Audit (COA) Chairperson Grace Pulido-Tan said she can maintain her independence from the appointing executive.

On Friday, May 30, Tan was among the nominees interviewed by the Judicial and Bar Council (JBC) for a spot in the 15-member High Court.

“Your honor, let me say that I am not personally close to the President… We met only after he has appointed me,” she clarified, upon being probed by the JBC panel.

Despite being appointed by Aquino to her current post, Tan maintained that she never felt beholden to him.

“Since my appointment, I appreciate very much the trust he reposed in me. But since day one, the COA has been the independent constitution commission that it was meant to be. From the very beginning to this day, the President has not been given any special treatment by the Commission on Audit,” she added.

Tan said the COA audits the Office of the President and the presidential staff in the same way it does other government agencies.

The JBC is on its second day of public interviews with contenders to the post. The council will submit a shortlist of candidates to Aquino, who has full power to appoint the next SC Associate Justice. (READ: Get to know nominees for SC Associate Justice)

It was under her leadership in the COA when the commission released its special audit report that helped the justice department file charges before the Ombudsman in relation to the illegal diversion of lawmakers’ Priority Development Assistance Fund (PDAF) to fake projects and beneficiaries. The report became documentary evidence, in addition to whistleblowers’ testimony, against key public officials.

The same report was cited by Tan during her JBC interview as “a sterling example” that she does not bow down to pressure.

Tan said her stay at COA has shown that “people can trust me, that I am competent, highly competent if I may say, and matapat po ako sa pagtupad ng aking tungkulin bilang isang (I am loyal in the fulfillment of my duty as a) public servant.”

Asked how she will fare at the SC with “no judicial experience,” the COA official said her previous post as undersecretary of the Department of Finance (DOF) was also “adjudicatory” in nature.

Tan said decisions at the Bureau of Customs (BOC) were often appealed before the DOF, and she had to decide on these cases. The BOC is among the government bureaus supervised by the finance department.

“(There were also) revenue regulations. I had to review them, before they can get enacted. (These) effective rules and regulations on tax administration helped improved tax collection,” added Tan, who is also a certified public accountant.

Tan said the same goes with her position in COA, where she decides on notices of disallowance and suspension. “Decisions-wise, puwede naman po ako makipagsabayan sa kanila,” she said. (Decisions-wise, I can keep pace with them.)

Asked if she is familiar with the set-up of the SC, she said “only what is known to the public by way of circulars and memoranda.”

“The internal workings, not really,” she added.

But Tan is determined to secure the position.