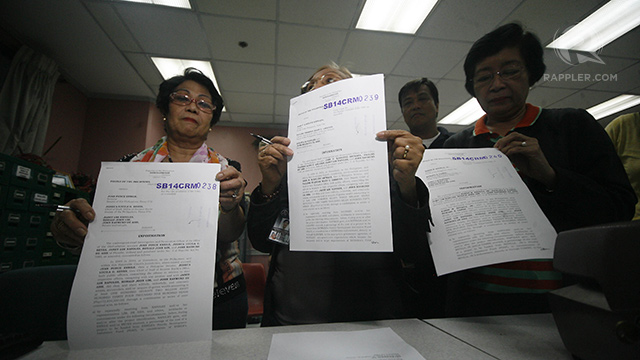 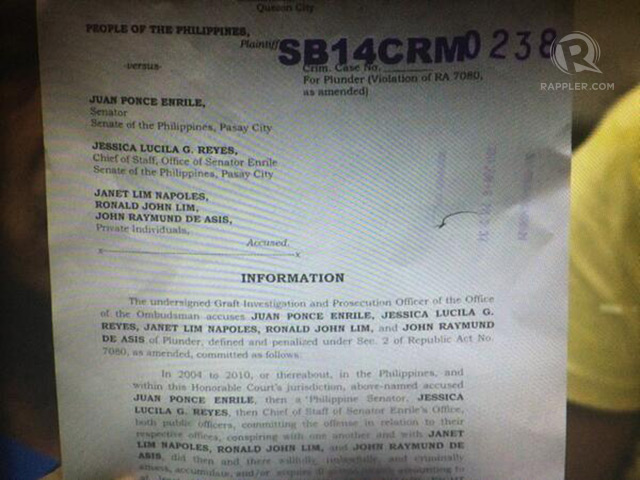 According to the findings of the Ombudsman’s probe, Revilla got the biggest amount of kickbacks from the scam amounting to P224 million, followed by Estrada with P183 million, and Enrile with P172 million.
Trolleys of documents put in boxes were brought by Office of the Ombudsman personnel to the Sandiganbayan Friday mid-afternoon. 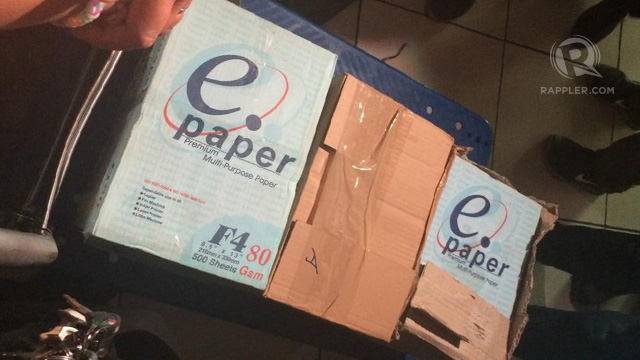 The cases are expected to be raffled off by next Friday, June 13. (READ: Arrest of 3 senators may take a while)
The regular raffling of cases to determine who among the Sandiganbayan judges and which of the 5 Sandiganbayan divisions will be handling cases filed is usually scheduled every Friday.
Lawyer Renato Bocar, Executive Clerk of Court IV at the Sandiganbayan, said however there is a possibility of a special raffle being conducted earlier than Friday.
“A special raffle will be conducted upon motion of any party but the court can motu propio hold a special raffle if there’s a valid and urgent reason for such,” he said, pertaining to procedures not specific to the PDAF scam cases.
After the raffle, copies of the complaint should be distributed to 3 Sandiganbayan justices for their review. They will then conduct a judicial determination of probable cause to proceed with the case.
Once they are convinced there is probable cause, they can issue the arrest warrants, tasking the Sandiganbayan’s sheriff office to implement their order. Arraignment can be set since the Court has now acquired jurisdiction over the accused.
The filing of charges by the Ombudsman comes almost a year after news on the corruption scandal first broke in July 2013.
The Ombudsman on Thursday, June 5, denied the senators’ appeals for judicial review meant to reverse the finding of probable cause against them. (READ: Napoles, 3 senators to be charged before Sandigan) 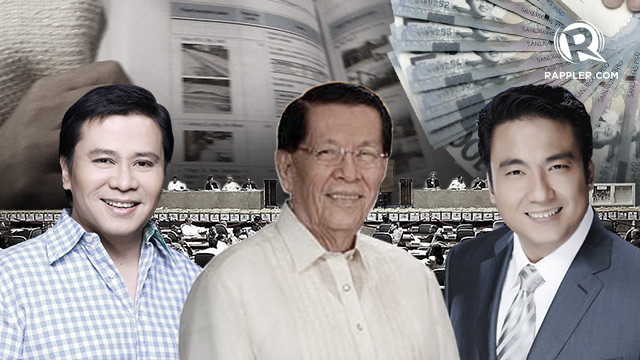 Napoles charged
According to a state audit report, the 3 opposition senators repeatedly approved in the years 2007 to 2009 fund releases to dubious non-governmental organizations (NGOs) controlled by alleged scam mastermind Janet Napoles. (READ: Bong, JPE, Jinggoy ‘suki’ to Napoles NGOs)
Napoles was also charged before the Sandiganbayan Friday. She is named co-defendant in the cases against the 3 senators.
The NGOs which Napoles controlled served on paper as beneficiaries of the lawmakers’ Priority Development Assistance Fund (PDAF), a lump sum ideally meant for community development projects.
The Ombudsman on Thursday denied Napoles’ application as a state witness, a status which would have granted her immunity from criminal prosecution over the scam. (READ: Without immunity, Napoles won’t help gov’t – lawyer)
Others charged
The others charged included Estrada’s appointments staff Pauline Therese Mary Labayen, and Revilla’s chief political staff Richard Cambe. (READ: Senators’ staff in PDAF case resigned, on leave)
Like Napoles, her driver-bodyguard John Raymond de Asis is a co-defendant in all 3 cases of the subject senators. On the other hand, Napoles’ nephew John Ronald Lim is a co-defendant in Enrile’s and Revilla’s cases. 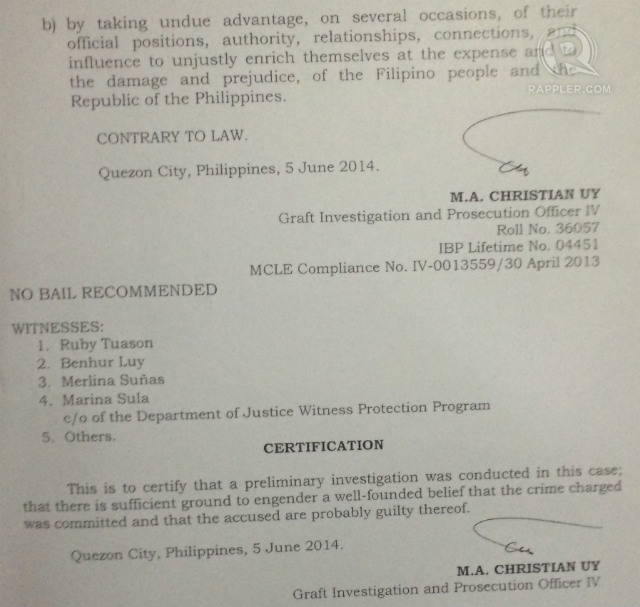 Used as evidence to indict the defendants were testimonies primarily of the following witnesses: Ruby Tuason, Benhur Luy, Merlina Suñas, and Marina Sula. All of them are in the custody of the Department of Justice Witness Protection Program. (READ: Navigating the PDAF scam affidavits)
In its criminal information filed Friday, the Ombudsman said the defendants took “undue advantage, on several occasions, of their official positions, authority, relationships, connections, and influence to unjustly enrich themselves at the expense and to the damage and prejudice, of the Filipino people and the Republic of the Philippines.”
The documents were signed by Ombudsman Conchita Carpio Morales.
Special panel of prosecutors
Also on Friday, Morales created a special prosecution panel composed of 3 teams that will handle the cases against the indicted senators. Deputy Special Prosecutor John Turalba and Acting Deputy Special Prosecutor Manuel Soriano Jr co-chair the panel.
The first team will argue in court for the conviction of Enrile. The team is composed of acting director Janina Hidalgo as team leader with assistant special prosecutors Edwin Gomez, Jennifer Agustin-Se and Annielyn Medes-Cabellis as members.
On the other hand, acting director Danilo Lopez leads the team that will prosecute Estrada’s case. Assistant special prosecutors Christina Marallag-Batacan, Anna Isabel Aurellano and Peter Jedd Boco are members of the team.
The third team is composed of acting director Joefferson Toribio as team leader with assistant special prosecutors Jacinto Dela Cruz, Lyn Dimayuga and Emerita Francia as members. They will argue in court to prove Revilla’s guilt beyond reasonable doubt. – Rappler.com