MANILA, Philippines – The exact day for the arrest of 3 senators charged with plunder remain a guessing game, but their special jail at the central police camp in Quezon City is ready for them anytime.

It’s not exactly the most welcoming and comfortable of places. (READ: From posh villages to a cell in Camp Crame)

On Monday, June 16, the Philippine National Police (PNP) took journalists on a guided tour of the detention centers that senators Ramon Revilla Jr, Juan Ponce Enrile, and Jinggoy Estrada will occupy should the anti-graft court order them transferred there. Visitors need to pass through 3 padlocked metal gates to get to the complex composed of 4 spacious rooms and one large “multipurpose area.”

PNP Public Information Office head Chief Superintendent Theodore Sindac said the complex was intended to be the quarters of the PNP Headquarters Support Service assigned to the custodial center. Plans changed with the impending arrest of over 54 people charged with plunder and graft over the pork barrel scam.

The complex inside the custodial center is made up of two cement structures. Between the two buildings are 4 outdoor sinks; outside, concrete pavement where detainees could go for a stretch. The complex is surrounded by concrete walls topped with barbed wire. Custodial center personnel patrol the perimeter of the walls.

The area – which has yet to be assigned a code name – is still undergoing final touches. Inside 3 of the rooms are single beds, small side tables, private bathrooms, and a sink. Each room also has its own ceiling fan and a window secured by metal grills.

The fourth room has two bunk beds inside. All mattresses are brand new. 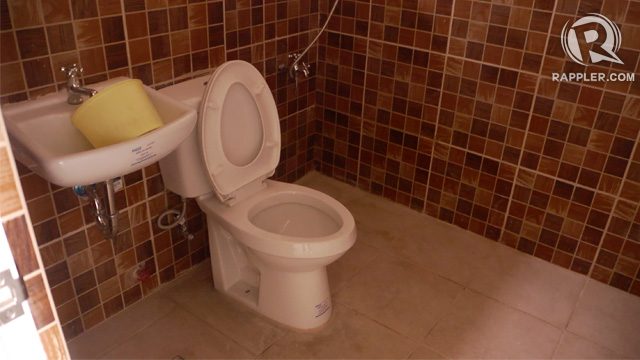 Earlier, police and Interior and Local Government Secretary Manuel Roxas II assured critics that the PNP will “act and perform professionally” in the arrest and detention of the 3 opposition senators allegedly involved in the illegal diversion of development funds.

Roxas is president-on-leave of the ruling Liberal Party and is seen as the party’s standard bearer in the 2016 presidential elections.

Sindac said room assignments would be based on court orders, but each room can comfortably house at least 2 single beds and 2 bunk beds. Sindac said up to 8 people can be accommodated in the complex.

The rest of the accused – should they be ordered detained in the custodial center – would be placed in a different area.

Other parts of the custodial center are sealed off from the officers’ quarters-turned -“pork barrel scam detention center.”

(We have several areas inside the custodial center: for the terrorists, the communists, those accused in the Maguindanao massacre, even those under the Witness Protection Program.)

Plunder charges against the 3 senators, alleged scam mastermind Janet Lim Napoles, and 5 others were filed before the Sandiganbayan on June 6. Graft charges, meanwhile, were filed on June 9.

The Sandiganbayan raffled the cases on June 13, but the arrest warrants may not come immediately given the number of legal remedies the accussed can take. Plunder is a non-bailable offense.

For instance, even before any warrants were issued, Enrile asked the Sandiganbayan to allow him to post bail, citing health concerns.

Ready as they are, Sindac emphasized that the custodial center is only a “temporary facility.” “This is not intended for the long haul.” In the Philippines, however, “temporary” usually means an indefinite timeframe. Many detainees have been living inside the custodial center for years.

The courts will have to decide where the accused in the scam will eventually be detained during the trial. The detainees can also request the court to allow their extended stay inside the custodial center if they feel they are unsafe elsewhere. – Rappler.com