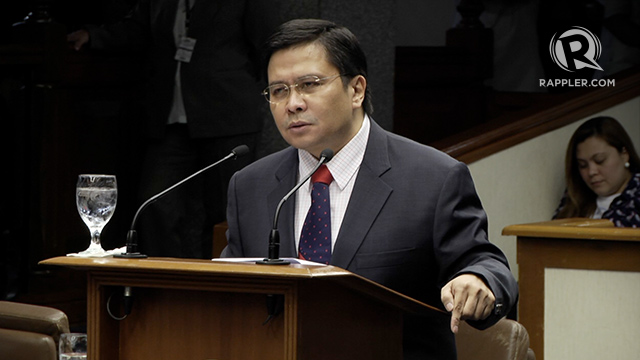 On Monday, June 23, the 5th division of the anti-graft court Sandiganbayan signed a resolution upholding the finding of probable cause by the Ombudsman against Estrada and ordering his arrest, a court insider told Rappler.

The Sandiganbayan released the signed resolution to reporters at around 10:40 am on Monday.

The 5th division, which is handling the plunder and graft charges against Estrada and his co-accused, is composed of Justice Roland Jurado as chairman, Justice Alexander Gesmundo as member, and Justice Alex Quiroz as temporary member pending the appointment of a new justice.

Ordering the issuance of an arrest warrant vs Jinggoy et al are Justices Jurado, Gesmundo, and Quiroz #Rappler pic.twitter.com/2ZN4mNCIK6

Below is the list – aside from Estrada – of those ordered arrested by the court ‘s 5th division on Monday:

The son of former president and now Manila Mayor Joseph Estrada previously said he would willingly surrender to authorities.

While plunder is a non-bailable offense, the lawyer of the 51-year-old opposition senator, Alexis Abastillas, said Friday afternoon, June 20, that they will file a motion for bail. She also said they would also file a petition for certiorari with the Supreme Court questioning the finding of the Ombudsman for probable cause.

At around 11:30 am, Estrada arrived at the residence of his father, former president Joseph Estrada, in Greenhills, San Juan. He said he would no longer go to the Sandiganbayan and will submit himself to the Philippine National Police headquarters in Camp Crame, where he will be detained.

The senator arrived at Camp Crame shortly past 12 noon Monday, accompanied by his father, other immediate members of his family, and at least 20 supporters. They were all allowed inside the multi-purpose hall where he underwent booking procedures.

Estrada was also temporarily jailed with his father, who is now Manila mayor, in 2001. At the time, the older Estrada was the principal accused in a plunder charge over illegally gaining from jueteng operations in the country. He was convicted while Jinggoy was acquitted.

This time, the younger is Estrada is one of 3 senators principally held to be probably liable by the Ombudsman over alleged diversion of development funds to ghost projects in connivance with Napoles.

In assailing his indictment, Estrada argued that he was merely endorsing non-governmental organizations already accredited by implementing agencies.

In a Monday resolution, however, the 5th division held that Estrada’s defenses against the Ombudsman’s finding would be better ventilated in a full-blown trial.

Napoles’ aides-turned-whistleblowers testified that the senator they referred to using the codename “Sexy” received kickbacks from Napoles along with his former appointments secretary, Pauline Labayen.

Estrada’s family friend, socialite Ruby Tuason, turned against him and admitted giving him bags of cash representing his kickbacks from Napoles in his San Juan home and even at his Senate office. Napoles also executed a sworn statement saying she personally handed cash to Estrada.

The senator denied all allegations against him, declaring in a privilege speech last week, “I am not a thief.” His main defense is that the whistleblowers have no personal knowledge of his alleged transactions with Napoles, and that the responsibility for vetting NGOs rests with implementing agencies, not lawmakers.

It earlier issued a hold departure order against him, which initially contained the name “Jose P. Ejercito Estrada.” His passport reportedly carries the name “Jinggoy Estrada.” In an amendment to its order, the anti-graft court clarified on Monday that the order also covers Estrada’s alias or nickname.

Will he get away again?

A former San Juan mayor, Estrada was first arrested on April 25, 2001 along with his father after they were accused of receiving payoffs from the illegal numbers game jueteng during the presidency of the elder Estrada.

Senator Estrada though was eventually granted bail and acquitted in 2007 after being able to rebut with documentary evidence the testimonies of prosecution witnesses. The former president was convicted but soon pardoned by his successor, Gloria Macapagal Arroyo.

The younger Estrada used both legal and political means to fight the charges against him. In the legal front, his lawyers filed before the Supreme Court a petition to stop the proceedings, arguing that the Ombudsman denied him due process.

An actor-turned-politician, Estrada also made his case before the public in 3 Senate privilege speeches attacking the Aquino administration for “selective justice” and “political persecution.” Of the 3 accused senators, he is the one most vocal that the case against them is a mere ploy to weaken the opposition ahead of the 2016 polls.

Estrada rejected calls for him to resign or go on leave, saying he will continue his duties as senator even while in jail. He lamented that the scandal greatly affected his wife and 4 children.

The senator’s arrest is a fall from grace for an official who held the Senate presidency in an acting capacity just last year, and became the second highest official in the chamber as Senate President Pro-Tempore. The self-styled “Anak ng Masa” (son of the masses) placed second in the 2010 senatorial polls, next only to his close friend and fellow actor Revilla.

Estrada has not ruled out running for higher office in the 2016 election but analysts said his plunder case weakens his candidacy.

Still, the senator insists he will again be acquitted and be able to run for office, much like his and his father’s experience with their first plunder case. – Rappler.com