Jun 23, 2014 12:13 PM PHT
Angela Casauay
Facebook Twitter Copy URL
Copied
(6th UPDATE) Senator Estrada is now at the PNP Custodial Center. 'The senator is thankful to the PNP leadership as he was treated with dignity and respect,' his camp says 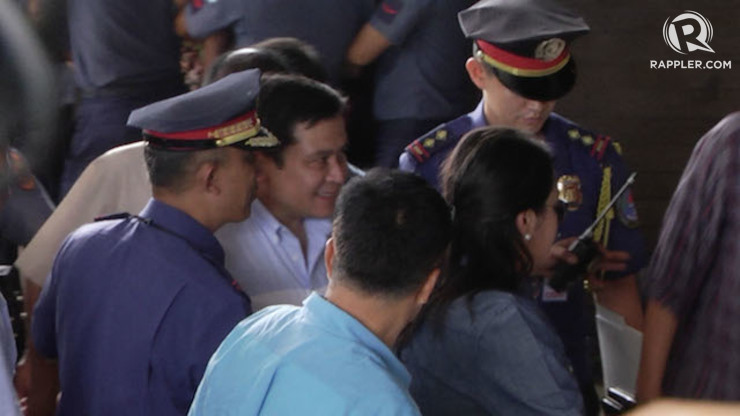 His booking process at the PNP multi-purpose hall – medical exams, fingerprinting, and taking of mugshots – took 10 to 15 minutes, according to his staff.

Representatives of the PNP’s Criminal Investigation and Detection Group brought to the anti-graft court Sandiganbayan details of Estrada’s arrest – a process called “return of warrant” – and sought the court’s commitment order.

Unlike his fellow senator and co-accused Ramon “Bong” Revilla Jr who surrendered on Friday, Estrada did not go to anymore to the Sandiganbayan before surrendering at Camp Crame.

Estrada turned himself in instead to his father – a figure of authority, as mayor of Manila, allowed to accept his surrender – before proceeding to Camp Crame for booking procedures.

Watch Estrada’s arrival at Crame below.

As soon as the PNP returned the warrant for Estrada, the court granted his urgent ex-parte manifestation and motion to be detained in Camp Crame.

In his motion, Estrada cited security risks if he would be detained elsewhere, given his stature and the nature of accusations against him.

“There is no hard and fast rule on custodial arrangements with respect to detention prisoners, as opposed to convicted prisoners. Nevertheless, Senator Estrada in an ordinary jail poses grave risks, and security concerns and issues,” his motion read.

Estrada is the second senator to be detained in connection with the pork barrel scam – the biggest corruption scandal in recent history that has enraged many Filipinos. Revilla, also an actor like Estrada, was detained at Camp Crame following the issuance of an arrest warrant against him by the court’s 1st division.

Former president and now Manila Mayor Joseph Estrada accompanied his son to the camp and was allowed inside the multi-purpose hall along with the senator’s wife Precy, their 4 children, his mother former Senator Loi Estrada, and at least 20 supporters. (READ: Jinggoy Estrada, wife renew wedding vows)

“The senator is thankful to the PNP leadership as he was treated with dignity and respect,” Estrada’s camp also said.

The anti-graft court Sandiganbayan’s 5th division ordered Estrada’s arrest Monday morning. He left his residence at Corinthian Hills shortly after the issuance of an arrest warrant against him and proceeded to his father’s residence in Greenhills, San Juan.

While plunder is a non-bailable offense, Estrada’s lawyer filed a motion for bail on his behalf Monday afternoon. (READ: Estrada seeks bail)

In assailing his indictment, Estrada argued that he was merely endorsing non-governmental organizations already accredited by implementing agencies.

In its Monday resolution, however, the 5th division that’s handling his case held that Estrada’s defenses against the Ombudsman’s finding would be better ventilated in a full-blown trial.

The actor-turned-politician is accused of pocketing P183 million (US $4.18 million) in kickbacks in an elaborate corruption scheme involving high-ranking executive and legislative officials, outraging Filipinos used to graft controversies.

Watch as Estrada is transferred to the Criminal Investigation and Detection Group.