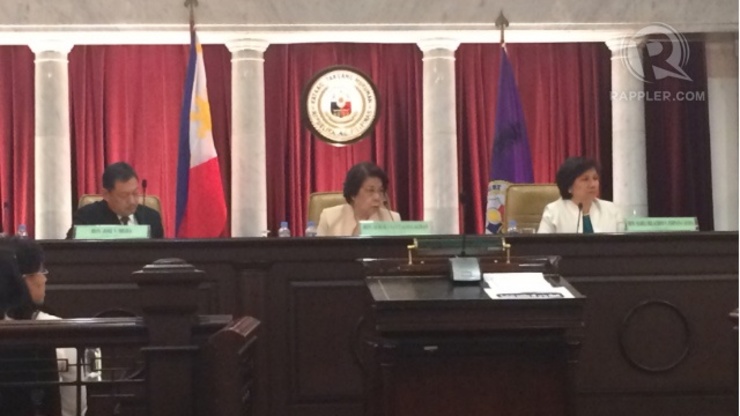 MANILA, Philippines – Solicitor General Francis Jardeleza’s third bid to become part of the 15-member Supreme Court (SC) is not without its share of twists and turns.

In a letter-petition filed before the SC on Wednesday afternoon, June 25, the government’s lawyer asked that Chief Justice Maria Lourdes Sereno be disallowed to vote on which candidates should be shortlisted for the vacant SC post.

Jardeleza said Sereno “cannot be expected to be neutral as a judge to decide on my qualifications when my nomination is put to a vote.”

He said the fact that Sereno raised issues against him during two Judicial and Bar Council (JBC) meetings “gives rise to a not unreasonable inference that her move to disqualify me is indeed a ruse to favor her alleged candidate.”

He said Sereno’s participation in the JBC voting presents a conflict of interest, as she will act as both his accuser and judge.

The JBC, chaired by Sereno, submits a shortlist of candidates from which the President picks a new appointee. The President holds full executive power to appoint for the vacancy.

The post in contention was vacated with Abad’s retirement when he reached the mandatory retirement age of 70 on May 22.

Jardeleza explained that Sereno raised before the council integrity issues against him that have long been cleared. Sereno cited a JBC rule that required a unanimous vote from the council for nominees whose integrity is challenged.

Jardeleza, however, said such allegations should not have been raised after the JBC public interviews of nominees. Citing JBC rules, he said he should have been asked about it during the interviews.

Sereno, however, was among the absent members of the JBC when the public interviews were held on May 29 and 30.

“She leveled her accusations twice, ex parte, impugning my integrity without informing me of the nature and cause of her accusations against me and without giving me an opportunity to be heard,” he said. He was pertaining to the two JBC meetings wherein Sereno supposedly raised the issues against him.

Sereno’s issues with Jardeleza stemmed from a complaint filed by one Antonio Baltazar, who sued Jardeleza for betrayal of public trust, dishonesty, and grave misconduct during his chairmanship of the Internal Affairs Board (IAB).

“The filing of the complaint was an act of harassment timed during the pendency of my then nomination for Chief Justice of the Supreme Court. I had replied to the allegations and was shortlisted by the Council despite Baltazar’s allegations,” he explained.

He added that the IAB already cleared him of the accusations on June 17, 2013.

​”Chief Justice Sereno neither supervises my work nor my public or private life. Any information she may have on my work or my life that may give rise to facts that relate to my integrity can thus only come from third parties,” said Jardeleza.

How he came to know

Jardeleza said it was JBC member and Court of Appeals Associate Justice Aurora Lagman who called him up to inform him that questions on his integrity were raised by Sereno during their June 5 and June 16 JBC meetings.

During the latter, he was ordered to appear before the council on June 30.

Jardeleza explained that Lagman told him Sereno chose not to put her accusations in writing but will state them personally on the June 30 council meeting.

“​Your Honors, I have built a life in the law based on integrity. My parents (both deceased) sacrificed a lot to send me to the University of the Philippines College of Law. I owe it to them not to allow the Chief Justice to do all these things to me. Likewise, integrity is the only legacy I can leave to my wife and children. I also owe it to them to put up a vigorous fight to clear my name. I thus beg all of you not to allow my integrity to be destroyed in the manner chosen by the Chief Justice,” he told the SC in his letter. – Rappler.com