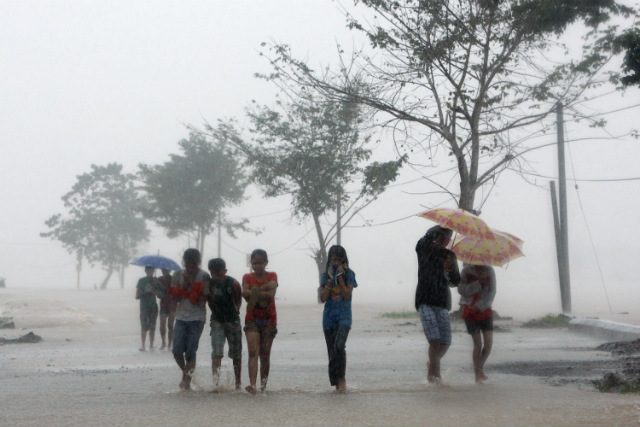 MANILA, Philippines – The Department of Health (DOH) on Thursday, June 26, warned the public of the 4 common diseases during the rainy season: influenza, leptospirosis, waterborne infections, and dengue.

“These are the usual diseases that we [have] to watch out for during rainy season,” DOH spokesperson Lyndon Lee Suy said in a press conference. (READ: 7 ways to stay healthy this rainy season)

Compared to 2013 data, dengue cases were reported to be 50% lower as of May. The department hopes to maintain the low numbers in the months ahead.

Dengue, a disease common in tropical and sub-tropical countries in the world, is transmitted through the bite of an Aedes mosquito, according to the World Health Organization (WHO). Dengue fever is potentially fatal and mainly affects children. (READ: Crowdsourcing dengue alert)

“We don’t have any reason to be complacent now. It doesn’t mean we have 50% less cases, we will already relax. We cannot do that. If we don’t do something, we may be caught off-guard with a sudden rise in dengue cases,” Lee Suy said in a mix of English and Filipino.

Here are 6 ways to prevent dengue, according to DOH:

The rainy season also means the possibility of flooding in many areas. In some places in Metro Manila, for example, even a few hours of heavy rain can trigger floods that take a while to subside.

“Let us make sure the drainage system [in our area] is not clogged so that once it rains, flood waters will not be at a standstill. We should not reach the point where flood waters take long to subside, thus causing the rise in leptospirosis cases,” he said in a mix of English and Filipino.

Leptospirosis is a bacterial infection commonly acquired through rodent bites, direct contact with infected animals, or cuts and open wounds exposed to a contaminated environment such as flood water.

Lee Suy also gave a few pointers on how to combat the common cold or influenza, a viral infection that attacks the respiratory system:

The common cold is often transmitted when someone coughs or sneezes, or through contact with surfaces, materials, and clothing contaminated with discharges of an infected person. – Rappler.com