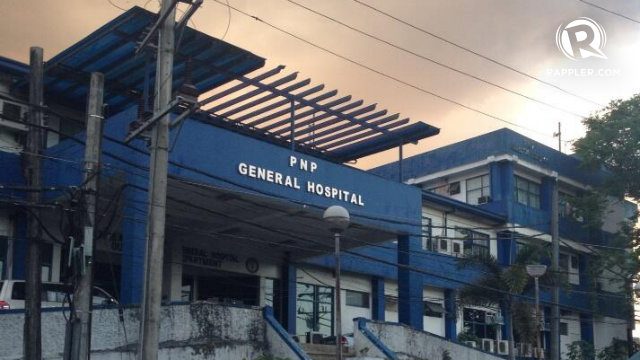 The Sandiganbayan has yet to issue an arrest warrant against him.

On June 13, Enrile’s camp submitted a motion asking the Sandiganbayan’s Third Division to grant Enrile bail on the grounds of his ailing health. Plunder is a non-bailable offense but the accused may be granted bail if the evidence against them is weak or if a person’s “life will be endangered as a result of incarceration.” In his motion, Enrile’s camp said bail could also be granted “even after showing evidence of guilt is strong…if the probability of evading prosecution is unlikely.” He said he was not a flight risk, citing his “poor and frail condition requiring consistent medical attention.” (READ: 90-year-old Enrile may still spend time in jail)

PNP spokesman Chief Superintendent Reuben Theodore Sindac told reporters on Wednesday, June 25, that the Camp Crame General Hospital inside the PNP headquarters in Quezon City has the right facilities to ensure the health of the 90-year-old senator.

President Benigno Aquino III himself seems to favor a hospital arrest for Enrile, owing to his frail health. Aquino said in a media interview in Japan on June 24 that “the advanced age of Senator Enrile” should be considered by the Sandiganbayan.

Sindac said preparations in the General Hospital are underway for any medical emergencies, hospital confinements, or hospital arrests. Also accused in the scam are Senators Ramon “Bong” Revilla Jr and Jinggoy Estrada. The two are already detained at the PNP Custodial Center.

“Medical emergencies” can also apply to the two other senators, said Sindac. Upon his surrender, Revilla complained of having migraines while inside his detention center.

There are two facilities inside the hospital that can serve as possible detention facilities for the 90-year-old, said PNP Health Services director Chief Superintendent Alejandro Advincula.

The Public Order Violator (POV) room is 9 square meters, has a fan, bed and its own bathroom.

The other room is 12 square meters with air-conditioning, and also with a single bed and private bathroom.

The POV is meant for detainees who need medical attention. The bigger, “better” room, is a special ward for the use of senior police officials admitted in the hospital. “Mas maganda ‘yun (It’s better),” said Advincula, referring to the special ward.

“But it depends on the court’s orders…if they take Enrile’s age and medical issues into consideration,” he added.

The rooms, added Advincula, have been ready around the same time the PNP prepared its Custodial Center for the accused in the pork barrel scam. The rooms, he said, could also accommodate Revilla or Estrada should the need arise.

Alleged pork scam mastermind Janet Lim Napoles, who has been detained at a Laguna police camp since August 2013, complained of the facilities – or lack thereof – in the Crame hospital after a February 2014 check-up.

It’s one of the reasons why Napoles did not want to be confined in “any government facility.” But the Makati court eventually ordered her confinement and surgery at the Ospital ng Makati, a public hospital.

The Crame general hospital is a tertiary hospital. While it does not claim to have the best facilities, Advincula said they have the “basics” covered.

“We have specialists on duty 24/7, we can give him a nurse if needed… Alam mo naman yung mga  (You know the) elderly, common problems niyan hypertension, heart problems….Meron kaming (We have) ECG, blood pressure monitoring. Kung (If)  eyesight, we also have an ophthalmologist,” he added.

He said that should Enrile desire, his personal doctors are welcome to visit. But, Advincula added, his attending physicians need to be doctors from the PNP should he be admitted in the hospital.

The head of health services also said the hospital’s daily operations would not be stalled by the possible hospital arrest of a high profile detainee.

PNP personnel, their dependents, and the general public flock to the PNP General Hospital daily. “We have a contingency plan. We will continue to serve our primary patients,” Advincula said.

When Napoles underwent a medical check-up in Camp Crame, the hospital had to shut its doors to the public for almost half a day. – Rappler.com