Jul 1, 2014 1:38 PM PHT
Buena Bernal
Facebook Twitter Copy URL
Copied
(3rd UPDATE) The High Court declares specific acts under the Disbursement Acceleration Program unconstitutional, among them, the cross-border transfers of savings of the executive department to offices outside it 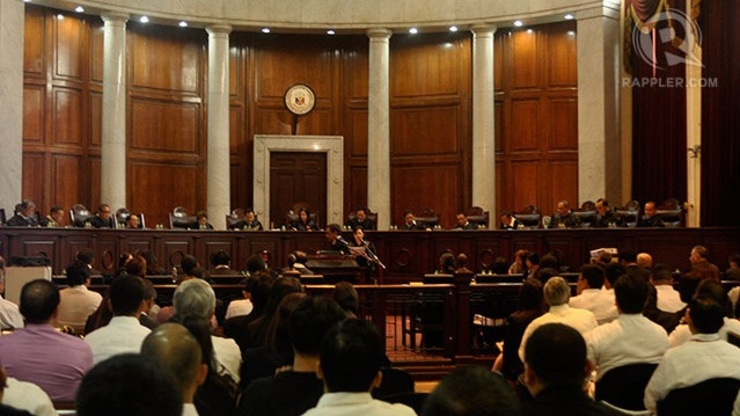 SC spokesman Theodore Te in a press briefing, said, “The court also declares void the use of unprogrammed funds despite the absence of a certification by the National Treasurer that the revenue collections exceeded the revenue targets or non-compliance with the conditions provided in the relevant General Appropriations Act.”
In effect, the Supreme Court declared as unconstitutional the creation of savings prior to the end of the fiscal year and the withdrawal of these funds for implementing agencies; the cross-border transfers of the savings from one department to another; and the allotment of funds for projects, activities, and programs not outlined in the General Appropriations Act.
The petitioners alleged  that the 3 acts struck down by the High Court essentially voided the program. 9 petitioners assailed DAP before the SC in late 2013. But other court insiders said it was an “over-simplification.”
The justices of the High Court voted 13-0-1, excluding retired justice Roberto Abad.* Justice Teresita de Castro inhibited from the voting. Justice Presbitero Velasco was on official leave but gave his vote to Chief Justice Maria Lourdes Sereno.
The court has yet to release its decision.
Exact accountability
Anti-DAP groups however said the SC decision falls short of holding the administration officials responsible for the DAP accountable for implementing an illegal program.
“Ang malaking hamon ngayon para sa korte at para sa atin ay yung pagpapanagot. Kung illegal ang DAP, kung merong maling ginawa, hindi naman uubra na walang mananagot dito,” said Bayan Secretary-General Nato Reyes.
(The big challenge today for the court and for us is holding [officials] accountable. If the DAP is illegal, if there is something wrong done, it cannot be that no one will be accountable for it.)
DAP is a program initiated in 2011 to transfer savings and unused funds from slow-disbursing programs of one department to fast-moving projects of another.
It became controversial after the now-indicted plunderer and opposition senator Jose “Jinggoy” Estrada delivered a privilege speech alleging that huge sums through the program were distributed to senators for the impeachment of former Chief Justice Renato Corona.
Earlier, on June 10, the SC was expected to vote on the constitutionality of DAP but justices deferred voting.
Necessary
President Benigno Aquino III and Department of Budget and Management (DBM) Secretary Butch Abad have defended the initiative, saying it was necessary to fast-track growth in the economy.
During earlier oral arguments, SC justices already pointed out that the cross-border transfer of funds from one branch of government to another was not permitted by the Constitution.
Justice Antonio Carpio was categorical. Rappler columnist Marites Vitug wrote earlier that savings, as defined by the General Appropriations Act, are excess funds from completed projects, discontinued projects, and those from finally abandoned projects. But the life span of operating expenses and capital outlay, as prescribed by the GAA, is two years, Carpio had pointed out.
This means that the government can only abandon an infrastructure project when the second year is about to end. Definitely, according to Carpio, the budget department cannot declare these as savings in the first year of the GAA.
The absence of written authority from the President, in 2011 and 2013, to realign funds was worse, Vitug, quoting Carpio, wrote. “This cannot be delegated to the executive secretary,” he pointed out. The budget circular on DAP was issued in 2012 and it “regularized” the disbursements in 2011.
Petitioners also further argued that it gave the executive department power to legislate fund allocations, which is within the duties of the legislative department when it passes the General Appropriations Act.
The administration, they said, went beyond its jurisdiction and overstepped its bounds.
It can be recalled that a similar argument was used to declare void the Priority Development Assistance Fund (PDAF), a lump sum distributed to lawmakers to fund projects at their discretion. In declaring its unconstitutionality, the SC said the PDAF gave the legislative branch powers to implement programs post-enactment. – Rappler.com
*Editor’s Note: The Supreme Court corrected its previous count of 14-0 to 13-0-1.