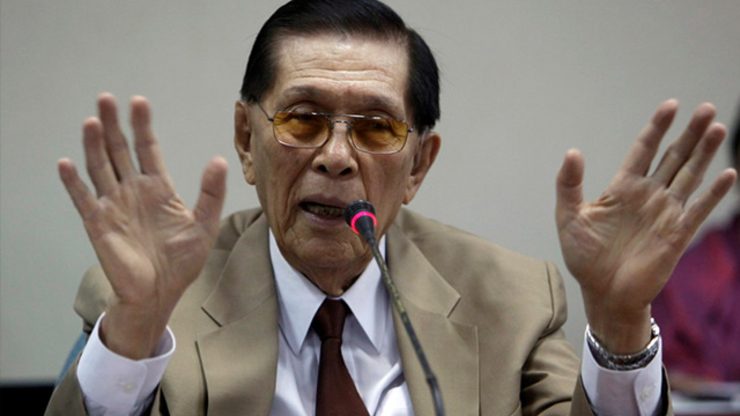 MANILA, Philippines – Senator Juan Ponce Enrile left his Makati residence on Friday afternoon, July 4, to surrender to authorities shortly after the Sandiganbayan’s 3rd Division issued a warrant for his arrest for plunder charges.

On Friday, July 4, Enrile left his house in Dasmariñas Village at 4:25 pm for Camp Crame, accompanied by his children – former Cagayan Representative Jack Enrile, and Katrina Ponce Enrile – and his lawyers, along with a few of his Senate staff.

At 3:30 pm on Friday, the Sandiganbayan’s 3rd Divsion said it found probable cause against the senator in connection with the graft and plunder charges filed against him by the Ombudsman. (READ: Court orders arrest of Enrile, Gigi Reyes and others)

The Enrile camp has been pushing for a hospital arrest for the 90-year-old senator.

Police officials said Enrile’s mugshots and fingerprints will first have to be taken inside Camp Crame’s multi-purpose hall. During this time, he will also be subjected to medical examination.

Doctors will then decide if he’s fit to stay at the custodial center or should be brought to the PNP hospital also in the same camp.

On June 6, Enrile, along with Senators Jose “Jinggoy” Estrada and Ramon “Bong” Revilla Jr, were charged before the Sandiganbayan for plunder for their alleged involvement in the multimillion “pork barrel” scam where public funds were diverted to bogus nongovernmental organizations run by alleged mastermind Janet Lim Napoles.