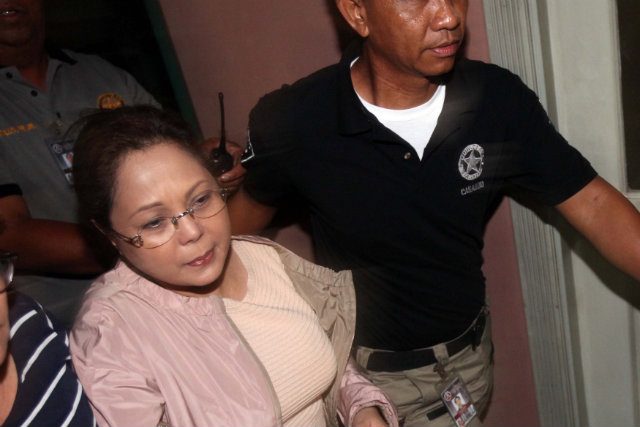 MANILA, Philippines – More than just an exchange of arguments, the hearing on lawyer Jessica Lucila “Gigi” Reyes’ plea to be transferred to another place of detention highlighted the state of the country’s jail system.

Quezon City (QC) jail warden Elena Rocamora explained to the court that the QC jail female dormitory, where Reyes was initially ordered to be detained, is 800% over its capacity.

Rocamora was summoned to the hearing to personally attest to the BJMP’s report that Reyes cannot be held at its QC facility, as it has inadequate means and resources to secure the accused.

Upon questioning by the justices, Rocamora explained that the state of the city jails managed by the BJMP across the country was as dismal as that of Quezon City’s.

In a report to the court, the QC BJMP said its female dormitory has 504 detainees instead of its ideal capacity of 56 detainees.

Justice Samuel Martires pointed out that the congestion in the QC BJMP violated the UN-prescribed 4.07 square meters in space per detainee. He said it violated the “human rights and the dignity of the prisoner.”

“The CHR (Commission on Human Rights) has not done its duty to inspect our jails,” Martires said.

What was supposed to be a simple hearing of the oral arguments of the prosecution and the defense on the move to transfer Reyes turned into a call for reform.

Martires said the government should “take a closer look into the law” governing the management of the country’s penitentiaries and jails.

He said under Republic Act 6975, municipal, city and district jails are currently supervised by the BJMP. Provincial jails, on the other hand, are operated by provincial governments. These jails house prisoners who have yet to be convicted.

Penitentiaries, where convicts are held, are supervised by the Department of Justice (DOJ).

The Sandiganbayan 3rd division is hearing the cases of Senator Juan Ponce Enrile and his co-accused over the siphonong off of his Priority Development Assistance Fund (PDAF) to fictitious projects. Reyes is Enrile’s former chief of staff.

The lawyer was ordered detained at the Quezon City BJMP on July 4, but the court wanted the BJMP to report on whether it has adequate facilities to ensure Reyes’ security.

In the meantime, and until further orders from the court, Reyes is detained in a female-exclusive detention cell found at the basement of the Sandiganbayan building.

Reyes’ motion was expected to be resolved Tuesday afternoon, but an order was not released on time. – Rappler.com