Jul 15, 2014 3:52 PM PHT
Rappler.com
Facebook Twitter Copy URL
Copied
For the first time since he assumed the presidency in 2010, Aquino appears unsure about public support and wants a 'quick' display of the people's sentiments 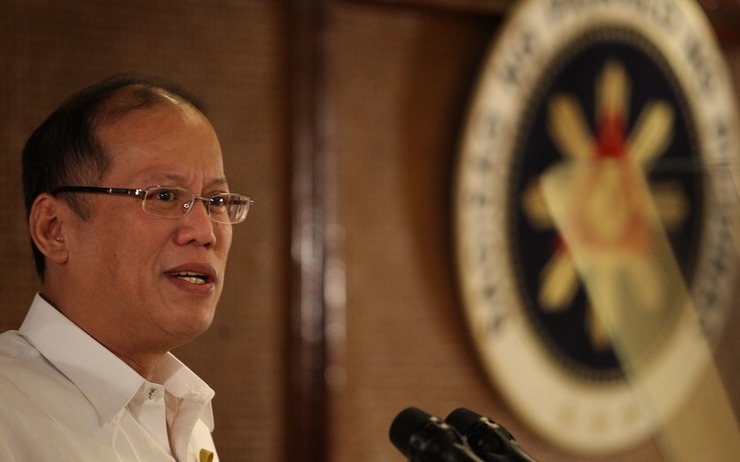 MANILA, Philippines – Dogged by public sentiment over the Disbursement Acceleration Program (DAP) and his lowest-ever approval rating as Chief Executive, President Benigno Aquino III on Tuesday, July 15, said he will ask his “bosses” to wear a yellow ribbon if they still support him.

At the Daylight Dialogue at Malacañang’s Rizal Hall, the President said this will be one of the “requests” that he will be making to the people in the coming days to manifest their support for his administration.

He was responding to Gregorio Navarro of the  Management Association of the Philippines who, in a brief open forum after speeches delivered by Aquino and World Bank president Jim Yong Kim, asked the President how Filipinos and civil society – his bosses – can help him.

For the first time since he assumed the presidency in 2010,  Aquino appeared unsure about public support for him. The previous day, July 14, the results of the latest surveys conducted by Social Weather Stations and Pulse Asia Incorporated showed the lowest satisfaction and approval ratings of Aquino, though he still enjoyed majority public approval.

“We will come up with perhaps the manifestation of the support – if I still have the support – of our people, and concrete examples of this, perhaps wearing a yellow ribbon, among other things, just to demonstrate exactly in a quick manner where the sentiments of our people lie,” he said.

The yellow ribbon was the official symbol of the Aquino campaign in 2010, in memory of his parents’ political struggle during the Marcos regime.

In the 1980s, supporters of former senator Benigno S. Aquino Jr tied yellow ribbons in the streets of Metro Manila to welcome his return from exile in the US, but he was assassinated upon disembarking from his plane at the Manila International Airport on August 21, 1983.

Yellow, which became the color of anti-Marcos groups, eventually came to be associated with Aquino’s widow, the late president Corazon C. Aquino, and now  her son.

In the forum, Aquino also said he will urge the people to help “incentivize” the legislature by telling lawmakers what they want from them, especially as the 2016 elections draw near.

“We are not that far off from elections, and this is I think the time when all politicians are attuned to what their bosses want. So the bosses have to make the message very clear perhaps in the form of letter, emails, text message to your representatives reminding them that this is what we want, these are our priorities please implement them as soon as possible,” he said.

The President said Malacañang “will be posting a more detailed list of requests to our bosses in the coming days.”

In his speech, Aquino thanked the World Bank president for his glowing review on reforms pursued by his administration in the last 4 years, and used this a platform to report on his achievements, so far, and his “healthy impatience” to accomplish as much as he can during his 6-year term to foster inclusive growth.

“It is not enough that we act. The duty of government is to act and to do what is right – to do what benefits the vast majority of people at the soonest possible time,” he said, providing the context for the Disbursement Acceleration Program (DAP), which he discussed at length in his speech. – Rappler.com