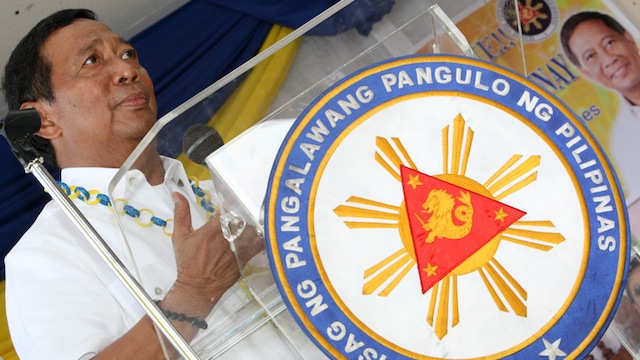 In a 9-page complaint filed with the Office of the Ombudsman, Renato L. Bondal and Nicolas “Ching” Enciso VI accused Binay of violating the Anti-Graft and Corrupt Practices Act in relation to the Anti-Plunder Law.

They said the contract for the parking building – described in the complaint as “the most expensive parking builidng in the entire country, if not the entire world” – was supposed to have amounted to only P245.56 million but was overpriced by more than P1.314 billion. The final contract price was pegged at P1.56 billion.

In their affidavit filed Tuesday, July 22, the complainants said Binay and his son, incumbent Mayor Erwin “Junjun” Binay, “violated every rule in construction manuals and government procedures in pushing for a project that was grossly overpriced and funded by various loans” which were irregularly passed through the City Council through supplemental budgets for 5 years.

An 11-story building with a roof deck, one-level basement parking and 5 floors of parking area with a total area of 31,928 square meters, the parking building, in effect, cost P48,859/sqm. An additional P350 million and P46.62 million were also appropriated for the transfer of Urban Development Department of Makati City to the new building, the complainants said.

Based on figures from the National Statistics Office, the average construction cost should have been only P7,691/sqm. This means that the Makati City Parking Building was over 6 times the official cost.

Mayor Binay rejected the complaint as “fabricated and clearly connected to the 2016 elections” but did not address the allegations raised against him and his father.

In a statement, the mayor only said that the Binays will face the complaint.

“The truth and the facts are on our aside.  We just hope that the concerned agencies of government will be fair and impartial,”  he said.

In 2007, the incumbent Vice President proposed and approved the initial appropriation of P400 million, which was “clearly already overpriced by more than P154 million” and “should merit his being haled to court for plunder,” the complaint said.

On top of this, Junjun Binay and the city councilors continued to propose, enact and approve 6 appropriation ordinances which facilitated the release of an additional P1.16 billion.

By the 4th quarter of 2012, the average construction cost of a commercial building was only P9,527/sqm. At this price, the parking building should have cost only P304.18 million. Yet the total amount appropriated for the construction as of 2012 was P1.56 billion, or an overprice of P1.255 billion, the complainants said.

The overpricing is a result of a “deliberate, systematic and unconscionable raid of public funds designed by the Binays and the other respondents to defraud the people of Makati and gain personal profit in the process.”

They also said the Binays should be held responsible for “this act of wanton misuse and plunder of public funds.”

In their complaint, Bondal and Enciso sought the preventive suspension of the accused officials so as not to prejudice the investigation of the case and to allow unfettered access to documents and information.

In his statement, Mayor Binay focused on discrediting the complainants and their motives, calling them “perennial contenders and serial losers in Makati elections.”

He linked the filing of the complaint to the release of a June 24 to July 2 Pulse Asia survey last week that showed that Vice President Binay remains the top choice for president in 2016.

“The filing comes just after the results of a Pulse Asia survey showed my father as the leading choice for President, with 41%. Clearly our opponents have become desperate to put my father down. Their intention is to malign him by raising baseless accusations like the ones raised in their so-called complaint,” Mayor Binay said.

The younger Binay also questioned why the complainants excluded their political allies and partymates as respondents. – Rappler.com