3rd impeach raps vs Aquino, this time over military deal 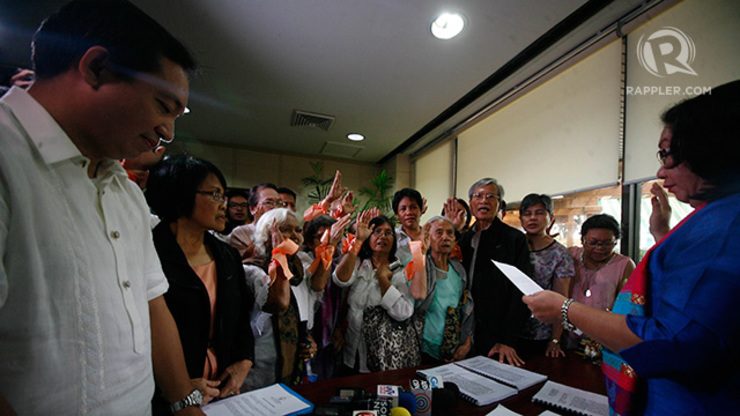 MANILA, Philippines – At least 21 complainants on Thursday, July 24, filed the third valid impeachment complaint against President Benigno Aquino III at the Office of the Secretary General of the House of Representatives.

Unlike the first two cases, however, it is not over Malacañang’s controversial spending program but the alleged unconstitutionality of an agreement between the Philippines and the United States which allows American troops more access to Philippine military facilities.

Petitioners said Aquino committed culpable violation of the Constitution and betrayal of public trust for entering into an agreement which they said “surrendered national sovereignity and compromised our territorial integrity.”

Complainants said they believe the Enhanced Defense Cooperation Agreement (EDCA) violates constitutional provisions that ban the presence of foreign troops and bases, as well as the use and entry of war materials.

They also assailed the executive branch for entering into an agreement that was not ratified by the Senate. Some senators share the same opinion. (READ: Senators pinpoint 7 flaws in EDCA)

“It is clear in the provisions of the Constitution that establishing bases are prohibited unless approved by the Senate and ratified by the people,” said former Bayan Muna Representative Satur Ocampo, one of the petitioners, in a mix of English and Filipino.

“Napakalawak, nakapatindi ng implikasyon at parang ibinenta na ang ating soberanya,” he added. (The implications are grave and far-reaching that it appears that they sold our sovereignity.)

The EDCA expands existing cooperation activities between the Philippines and US to include two new activities. Under the deal, the US military can build military facilities and preposition defense assets in “agreed locations” that are yet to be determined by the two countries.

The Philippine panel that negotiated the agreement said the deal would address the country’s lack of defense equipment. (READ: ‘EDCA benefits PH more than US’)

A case seeking to declare the EDCA as unconstitutional is currently pending before the Supreme Court.

Asked how the case before the SC would affect the impeachment case, Ocampo said the petitioners believe the impeachment raps should have a separate resolution from the case at the high court since they are two different mechanisms.

At least two of the petitioners in the EDCA case before the high court – former Bayan Muna Representative Teddy Casiño and Bagong Alyansang Makabayan (BAYAN) chairperson Carol Araullo – are also complainants in the third impeachment rap against Aquino.

Other complainants in the impeachment raps include:

Meanwhile, progressive group Sanlakas also submitted an impeachment complaint over DAP before the House secretary general on Thursday. However, it was not officially accepted due to the lack of an endorsement from lawmakers.

“We note the filing of the third impeachment complaint based on the Enhanced Defense Cooperation Agreement (EDCA) between the Philippines and the United States (US). As in the previous complaints, we will leave it to Congress, as an independent and co-equal branch of government, to assess and decide on its merits,” Coloma said.

Coloma defended the merits of the EDCA especially in wake of ongoing tensions in the West Philippine Sea (South China Sea).

“We maintain that the EDCA is a response to the evolving security challenges in the Asia-Pacific Region on account of disputes among countries with maritime entitlements in the West Philippine Sea,” Coloma said.

“The EDCA builds upon the Mutual Defense Treaty, which for more than 60 years, has served as the main platform for the strategic defense partnership between the Philippines and the United States,” he added.

Aquino is set to deliver his fifth State of the Nation Address on Monday, July 28. Once Congress opens its second regular session, all impeachment complaints will be referred to the House committee on justice for deliberations.