Water spray vs SONA 2014 protesters as barricades are toppled 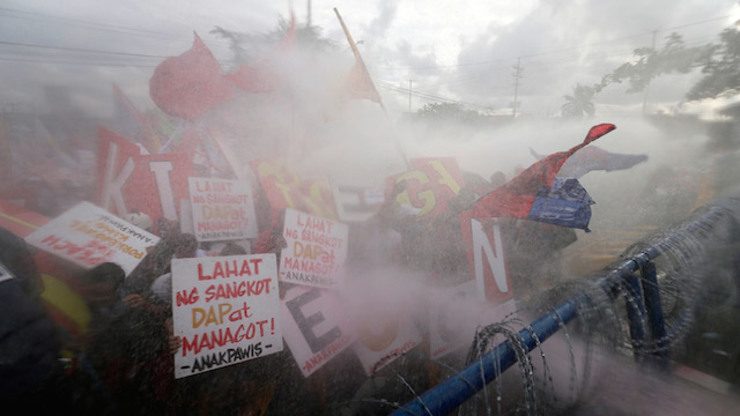 MANILA, Philippines – As President Benigno Aquino III was finishing his State of the Nation Address (SONA) Monday afternoon, July 28, the police was spraying colored water on protesters who were able to topple the barricades set up to keep them a safe distance from the SONA venue.

The water was apparently mixed with red dye, purportedly so cops could easily distinguish protesters if the assembly turned violent and they ran away.

Protesters succeeded in bringing down parts of the concrete and metal wires but nonetheless stayed behind the barricades and then later retreated.

Part of the barricade is toppled but police and protesters keep their positions #SONA2014 pic.twitter.com/HGDaLpd4n4

The protesters were able to go as far as Ever Gotesco mall along Commonwealth Avenue, based on photos tweeted by Rappler’s Pia Ranada. It’s a short distance from the Batasan Road, where the House of Representatives is located.

Like in previous years, the protesters also burned an effigy of President Aquino before his speech started.

Police at the main barricade near Ever Gotesco #SONA2014 #Rappler pic.twitter.com/846oh2CkT3