Aug 1, 2014 2:38 PM PHT
Jee Y. Geronimo
Facebook Twitter Copy URL
Copied
While the incubation period of the Ebola virus is from 2 to 21 days, the Philippines' health department has extended its monitoring period to a month 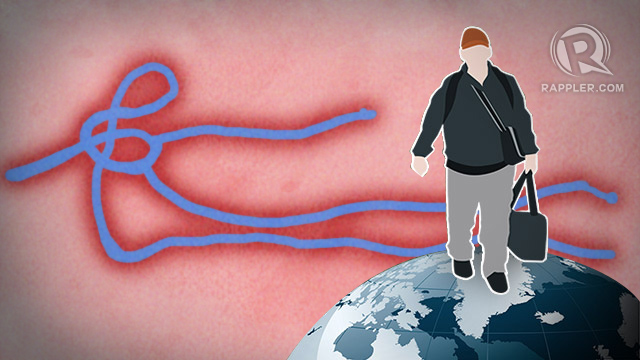 MANILA, Philippines – The Department of Health (DOH) on Friday, August 1, said it is closely monitoring 7 overseas Filipino workers (OFWs) who recently came home from Sierra Leone – one of the west African countries with an Ebola outbreak.

Initially, there were 15 OFWs repatriated by their recruitment agency back to the Philippines, the health department said in a separate statement. They arrived in the country between June 26 to July 15.

In a press conference Friday, Health Spokesperson Lyndon Lee Suy said the incubation period between exposure to the Ebola virus and the first symptoms is from 2 days to 21 days. The department’s monitoring period, however, has been extended to a month.

Lee Suy admitted 3 out of the 15 OFWs had fever – one of the symptoms of Ebola – but they eventually tested negative for the deadly virus.

“With Ebola, the patient has to manifest the symptoms first before being capable to transmit infection,” Lee Suy explained.

In some cases, it also causes organ failure and unstoppable bleeding. It can kill victims in just days. (READ: Ebola: a ruthless killer)

As of July 27, the World Health Organization said there have been 1,323 cases of Ebola and 729 deaths in the 4 west African countries of Guinea, Liberia, Nigeria and Sierra Leone. (READ: Ebola-hit west Africa launches emergency plan)

With a fatality rate of 55%, Lee Suy said the Ebola virus is deadlier than the MERS Coronavirus and the bird flu.

The good news is that the Philippines remains free from the 3 emerging diseases.

“Proactive tayo. Alam natin yung threat nandoon. We don’t want na mabigla tayo (We’re proactive. We know the threat is there. We don’t want to be caught off-guard),” he said, adding that a coordination mechanism is in place so the country “is in a better position now to address Ebola.” (READ: Ona: Philippines ready for Ebola)

Lee Suy added: “Marami tayong natutunan with MERS-CoV (We learned a lot from MERS-CoV). We’re not starting from zero with Ebola.”

Right now, Philippine airports already have thermal scanners to detect which arriving passengers have fever. Passengers are also being asked to fill up a health checklist upon arrival in the country.

DOH is in coordination with the Department of Labor and Employment to get a list of Filipinos working in Guinea, Liberia, and Sierra Leone.

This also means the country will allow only OFWs with existing employment contracts to go to these countries; deployment of workers with new contracts remains suspended.

Lee Suy said that none of the few Filipino health workers in Guinea, Liberia, and Sierra Leone are assigned to Ebola cases.

Despite fears the Ebola outbreak could spread beyond west Africa, the health official told Filipinos not to worry.

“[There is] no reason to panic, but we do not have the room to be complacent about this as well,” Lee Suy said. – Rappler.com