Aquino: We need more cops but… 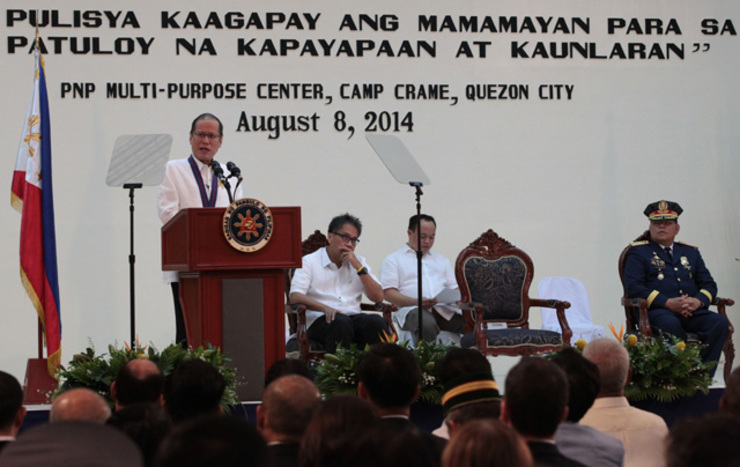 But, he told an audience of top police generals and other dignitaries, before recruitment quotas can be increased, the government must first solve its inability to give the proper pensions to retired uniformed personnel.

Aquino said at least P4 trillion (US$90.68 billion) in “seed capital” is needed to fix the pension system – on top of the P2.6 trillion (US$59 billion) allocated for pensions in the 2015 budget.

The amount is for all of the government’s uniformed personnel – the police, Bureau of Fire Protection (BFP), the Bureau of Jail Management and Penology (BJMP) and the Armed Forces of the Philippines.

“Kakaiba yung pension system. Hindi ito katulad ng sa GSIS. Ang idea is… dadalhin sa isang punto na magkaparehas na,” Interior Secretary Mar Roxas told reporters after the President’s speech. Roxas, as the interior secretary, oversees the PNP, BFP, and the BJMP. (They have a different pension system. It’s not like the GSIS. The idea is that one day the pension systems will be the same.)

The President vowed to find a solution, even as pension issues have started to creep into the PNP’s operations.

Early July, a Manila court issued a notice of garishment order, preventing the PNP from making any “withdrawal, release or transfer [of]… deposit accounts, properties or assets” that would make the national police’ account balance go below to equal P3.9 billion.

It means the PNP would be unable to get its operational funds for August nor would it be able to dispense the August 2014 pensions of over 66,000 PNP and Integrated National Police pensioners.

The order was a result of a civil case filed by around 3,000 INP pensioners over their pension differentials from 1991 to 2006. INP retirees used to get less than their PNP counterparts, but this was aligned in 2006.

But despite a Supreme Court order saying INP retirees deserved the same pension as their PNP counterparts, the budget department has yet to release the funds thus the deadlock.

The release of additional money for pension naturally affects resources that would otherwise be used for other plans – such as hiring more cops.

It’s no secret that the PNP’s 148,000-strong force is lacking. In a previous briefing with reporters, PNP spokesman Chief Superintendent Reuben Theodore Sindac admitted the police force has lagged behind the country’s population boom.

With the Philippine population breaching 100 million, the nominal police-to-population ratio stands at around 1:675 – short of the 1:500 ideal.

Makati Mayor Junjun Binay recently requested the PNP to boost its police force because the 560 personnel was not enough to secure the city’s permanent and transient populations.

The request was granted, but the added personnel will only be felt come 2015 – after they undergo training.

It’s why the PNP wants to hire over 30,000 non-uniformed personnel to take over administrative jobs – so that more police can be assigned to the field. It was a promise Aquino made during his 2013 State of the Nation Address.