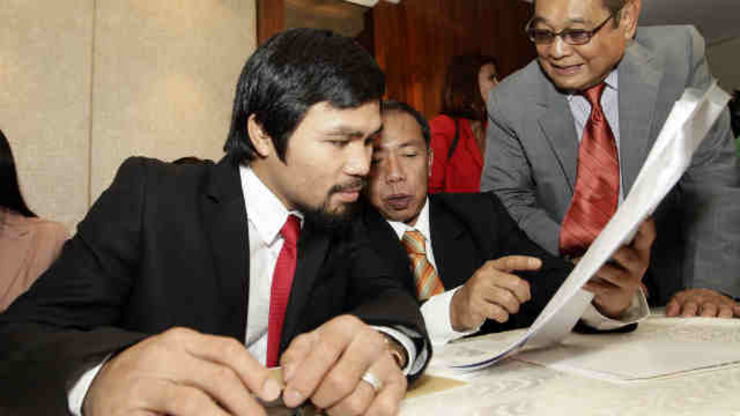 MANILA, Philippines – World-renowned boxer Emmanuel “Manny” Pacquiao asked the Supreme Court (SC) to reverse a court requirement for him to post bond to stop the Bureau of Internal Revenue (BIR) from collecting his allegedly unpaid taxes.

Pacquiao sought the high court’s help through a petition for certiorari filed on August 4 and released Friday, August 15.

In the petition, Pacquiao asked the SC to partially reverse a 10-page Court of Tax Appeals (CTA) resolution issued on April 22.

The resolution granted Pacquiao’s plea to stop the BIR from collecting his allegedly unpaid taxes from 2008 to 2009. The condition, however, was for Pacquiao to post a P3.3-billion ($73.8-million) cash bond or P4.98-billion ($110.69 million) surety bond.

A cash bond is paid in cash, while a surety bond is promised to be paid in the future.

Pacquiao wanted to do away with the bond requirement.

Pacquiao also asked the SC to stop the BIR from collecting allegedly unpaid taxes from him by temporarily seizing his assets.

He asked for a temporary restraining order to effectively stop the BIR “from issuing, executing, enforcing, implementing, or otherwise giving effect to any Warrant of Distraint and/or Levy, Warrants of Garnishment, and Notice of Tax Lien.”

The April 22 CTA resolution ordered the lifting of the said warrant, which allows the state to take Pacquiao’s assets until the payment of his alleged obligation to the state.

Pacquiao allegedly owes the government P2.2 billion (around US$ 49.21 million*) in tax liabilities.

The BIR said Pacquiao misdeclared his income tax returns for 2008 and 2009.

The BIR accused the former 8-division world champion of failing to report his dollar winnings from his fights against Juan Manuel Marquez, David Diaz, and Oscar de la Hoya in 2008; and Ricky Hatton and Miguel Cotto in 2009.

The tax court on December 5, 2013 issued a gag order preventing Pacquiao and the BIR from disclosing to the public details of the case. – Rappler.com