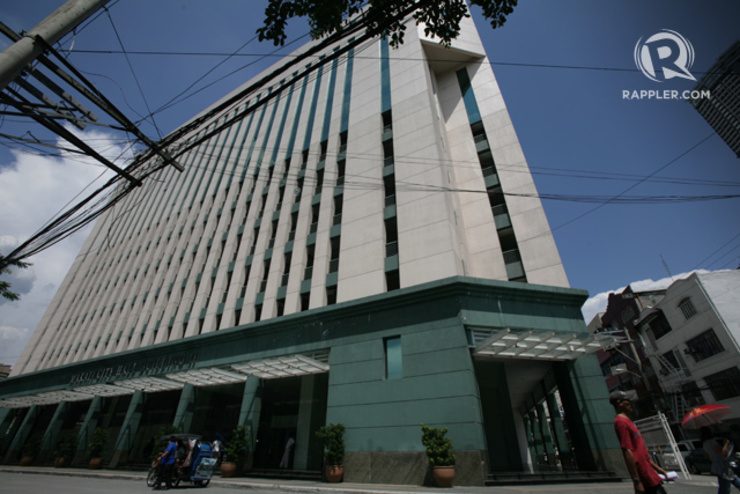 MANILA, Philippines – Commission on Audit (COA) Chairperson Grace Pulido-Tan clarified that her agency did not issue a certification saying that the alleged Makati parking building was not overpriced.

Tan appeared at a Senate investigation on the allegedly overpriced building, contradicting the claim of Vice President Jejomar Binay and his son, Makati Mayor Jejomar Erwin “Junjun” Binay Jr, that the COA had deemed as “reasonable” the price of the structure.

“We did not issue any clearance and we really do not give clearances to [that] effect. No such thing. The commission does not issue clearances of the nature or the tenor that was described,” Tan told the Senate blue ribbon committee.

The Binays have been citing a COA memorandum prepared by resident auditor Cecilia Caga-anan that stated there was no “adverse finding” from Makati City Audit Groups on the alleged parking building.

Yet Tan clarified that it was just an “internal memo.”

“It is still being evaluated by the Central Office, by us, and I would say that at this stage, this is just a report subject to evaluation along with all the other pertinent documents and papers,” Tan said.

Tan said the COA central office is doing a “special audit” on the building.

Tan’s comment prompted Senator Antonio Trillanes IV to criticize Mayor Binay. In his opening statement and media interviews, Mayor Binay had cited the COA report to argue the building was not overpriced.

The Senate blue ribbon committee is investigating the building allegedly overpriced by at least P1.9 billion ($43 million*). The Senate resolution of Trillanes is based on the plunder and graft complaint lawyer Renato Bondal and Nicolas “Ching” Enciso VI filed against the Binays before the Ombudsman.

The Binays denied the overpricing, dismissing the case as “politically motivated.”

Pressed by senators, Tan said she could not commit when the COA will finish its audit, citing the project spanned 6 years, from 2007 to 2013.

Still, Tan said this early, there are “red flags” in the project. The complainants said the project violated procurement laws by dividing it into 5 phases.

“On November 8, 2007, a city ordinance appropriated the amount for the 1st phase of P400 million. And then on December 28, 2007, one month and a half later, phase 1 was bid out. On January 18, 2008, the contract was awarded to Hilmarc’s Construction. So in less than 2 and a half months from the date of appropriation, we have completed procurement,” Tan said.

“A contract of this magnitude usually takes 6 months [to procure]. If it was efficiency, then it’s commendable. But I don’t want to prejudge.”

Asked by senators, Tan said dividing the project into 5 phases was a “red flag.”

Senator Aquilino “Koko” Pimentel III said the statement is significant, after Senator JV Ejercito pointed out that as a former mayor, there was “nothing irregular” with dividing a project into phases and said he did this too when he was San Juan mayor.

The COA chief said the agency will consult quantity surveyors in its audit “because this is really technical. Rest assured we will do everything.”

Tan also told senators that the complainants can file a plunder and graft complaint against the Binays even if there is no COA report yet.

“There is nothing premature about filing a case with the Ombudsman. The Ombudsman is independent, whether or not we have finding, it’s up to the complainants to file a case.”

Trillanes: Why only 20 days?

Trillanes also chided COA auditor Caga-anan for issuing the memorandum when she said she only relied on the work of technical audit specialists and could not vouch for the data herself.

Trillanes said the date of one of the bids was July 2011 but it was awarded in August 2011 or within 20 days. The senator said the speed was questionable.

The former Navy officer said: “I was a procurement officer. We dealt with just basic supplies. These were not highly technical projects.”

Upon questioning of Trillanes and partymate Senator Alan Peter Cayetano of the Nacionalista Party, Mayor Binay insisted there was no overpricing.

Mayor Binay reiterated that the building was not a mere parking building but housed office spaces and was “our version of a green building.” – Rappler.com