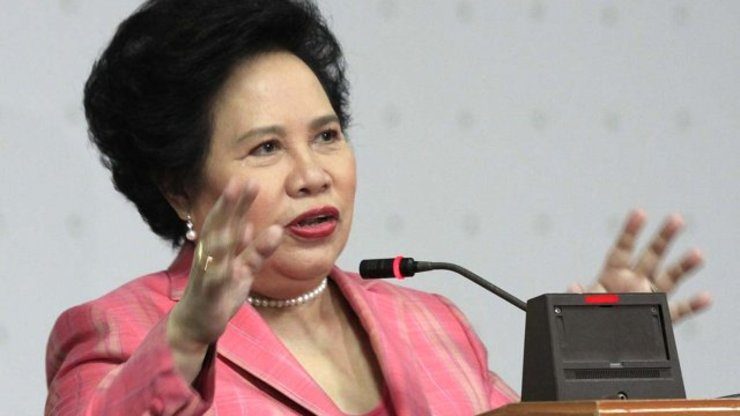 Facebook Twitter Copy URL
Copied
The senator takes her cue from constitutionalist Joaquin Bernas, who told President Aquino not to seek a second term and 'give Miriam naman a chance'

More than a month after announcing she has stage 4 lung cancer, the controversial but popular senator broke her silence and indicated she might seek the presidency.

Santiago took her cue from constitutionalist Father Joaquin Bernas SJ, who said in an ANC interview Tuesday, August 26, that President Benigno Aquino III should no longer seek a second term and “give Miriam naman a chance.”

In a statement, the constitutional law expert said she will run for president “if there are enough ‘like-minded’ supporters led by Fr Joaquin Bernas.”

“I’m not going to be coy. Society leaders have urged me to seek the presidency. I can rise to the occasion, although I was following the other sign posts on the road to recovery,” Santiago said on Wednesday, August 27.

In a press briefing on July 2, Santiago shocked Filipinos when she suddenly announced she had stage 4 cancer, the final stage. The senator now said that there are signs she is recovering.

Santiago revealed that, in June, oncologists led by cancer specialist Doctor Ronald Natale and Doctor Gary Lorenzo, coordinating with cardiologist and former health secretary Esperanza Cabral,diagnosed her with cancer. She was then placed on medication called Tarceva or Erlotinib for 6 weeks, with one tablet a day.

The former trial court judge known as “the iron lady of Asia” said that on August 12, St Luke’s Medical Center in Bonifacio Global City issued a “report on a PET/CT Scan stating that the tumor in her left lung has regressed” or became smaller.

“The latest lab test shows that the cancer cells are waving a white flag. During this time, I only have to work on my stamina. During the 6-week period of treatment, I was even able to work on the 2014 editions of some 10 law books which are scheduled for release by the end of the year,” she said.

‘Villar told me I’m so popular’

This is not the first time Santiago has flirted with the idea of running for president again, after her failed 1992 bid. She then ran for president but lost to Fidel Ramos in an election she strongly claims to be rigged.

In past months, Santiago said in her speeches that the Philippines should have a female leader as its next president, and harness the power of social media where she is the self-proclaimed most popular politician.

Now, Santiago expressed even more interest in the position.

“I have licked cancer, and I’m actually thinking of several career options. By 2016, I will be disqualified by law to seek another term as senator. At present, my life projects include participation in the International Development Law Organization (IDLO) based in Rome, or writing books on foreign policy at the Wilson Center in Washington, DC,” she said.

In 1992, Santiago ran under her People’s Reform Party but now she said she “needs” to coalesce with either the ruling Liberal Party (LP) or the Nacionalista Party (NP) of former Senator Manuel “Manny” Villar Jr. Her statement pointedly left out the new political party of Vice President Jejomar Binay, who is leading surveys for 2016.

The senator disclosed that she and Villar already talked about her political chances.

“After I was diagnosed with cancer, Sen. Manny went to my house and told me, among other things, that my popularity level is very high. But he also said that he is encouraging several hopefuls to raise their survey ratings,” Santiago said.

Santiago has been allied with Villar, and even ran as a guest candidate of NP in 2010.

If Santiago indeed runs for president, she might tap her youth supporters as she has been active in speaking engagements of youth organizations and schools. She might emerge as an alternative choice following Binay’s presidential declaration and reports that Roxas will likely be LP’s bet.

Besides cancer, Santiago has been suffering from chronic fatigue syndrome, which caused her numerous absences since the start of the 16th Congress in July 2013. She also resigned her post from the International Criminal Court (ICC) because of her health.

Still, Santiago maintained that her health is not an obstacle to a possible presidential bid. She quoted from a poem she said she recited during the funeral ceremonies for her 23-year-old son, whose death in 2003 was reportedly declared by police to be suicide.

“Do not stand at my grave and weep; I am not there. I do not sleep.” – Rappler.com