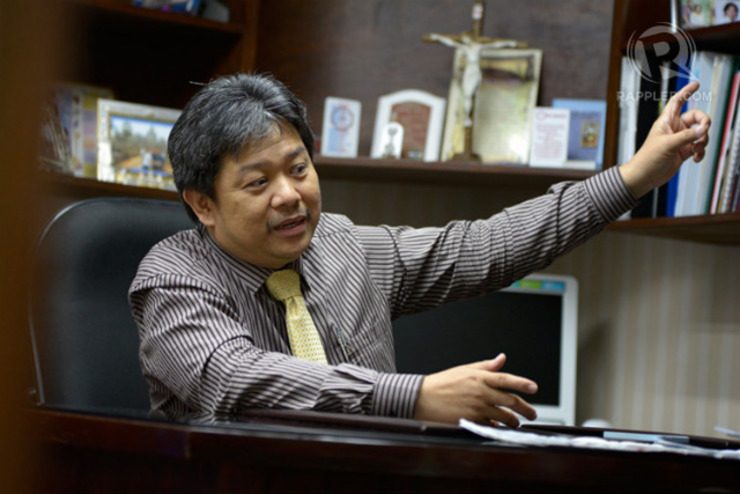 Facebook Twitter Copy URL
Copied
If we are to believe them, the lawyers of alleged pork barrel scam mastermind Janet Lim-Napoles are in it for the long haul
MANILA, Philippines – There is a foot-long crucifix catching the attention of visitors to the David Cui-David Buenaventura and Ang Law Office, whose lawyers handle the plunder and graft cases of Janet Lim Napoles, the alleged pork barrel scam mastermind.
It is an odd group with lead counsel Stephen David occasionally quoting scripture during chance interviews.
But it is no secret that even their client is a staunch religious woman – regularly hearing Mass, paying for the school fees of would-be priests, and donating big sums to the Catholic Church.
David even claims Napoles prays the rosary 2,000 times a day. He said a group of priests was among those who urged him to take on Napoles as client.
In a casual group conversation with reporters after her bail hearing, Napoles extended her palm and showed her rosary to the group.
She was holding on to the rosary during the hearing while occasionally reading through a prayer book.
“Bigay ito ni Pope (This was given by the Pope),” she said of the rosary. Napoles was referring to Pope John Paul II.
While strongly religious, Napoles allegedly defrauded the government of millions of pesos meant for development and livelihood projects supposed to benefit poor rural communities in the province.
She has been indicted for plunder and 42 counts of graft – the most number of graft cases among all accused over the scam – before the anti-graft court Sandiganbayan.
Napoles has been painted as the evil “Madame” who used even her own employees and relatives as dummies and signatories in documents related to her illegal transactions with government. This way, the scam could not be easily traced back to her.
A friendlier Napoles
A year since her surrender to no less than President Benigno Aquino III, Napoles has changed in terms of her relations with the press.
Napoles is still largely seen as the mastermind behind an elaborate scheme diverting massive amounts from the Priority Development Assistance Fund (PDAF) of lawmakers to fictitious projects of non-governmental organizations she controlled.
Given the gravity of her offense, it would naturally be hard for her to make light of things. But she does so occasionally nowadays. For instance, while in court, she’s friendlier and warmer toward the media. She smiles at reporters who catch her eye even while proceedings are ongoing. She even responds to questions from select reporters, including questions about her rosary.
She is also particularly chatty with her escorts from the Bureau of Jail Management and Penology (BJMP) in Taguig City, where she is currently detained.
She’s learning the art of flattery – a tactic often used by her counsel David with reporters at the anti-graft court.
“Ang gaganda niyo naman. Usap tayo mamaya (You’re all so pretty. Let’s talk later),” Napoles once told another group of reporters. The conversation never happened, although her weekly appearances during her bail hearing have made her more comfortable speaking with the media.
Lanee Cui-David, wife of Stephen David, and also one of Napoles’ lawyers, denied coaching their client in personal relations. She said that is how Napoles has always been – “simple, jolly, and kind.”
Before November 2013 when the team took on Napoles as their client, Cui-David would have had second thoughts. The image of Napoles was formed only by media reports that portrayed her as the woman who had people at her beck and call. A crying son broke a mother’s heart
It was Napoles’ son who broke the heart of Cui-David and eventually made her agree with her husband to represent Napoles in court.
Napoles’ son and also her co-accused in a number of graft cases, James Christopher, showed up at David’s office crying. (READ: Napoles children slam ‘polluted’ state witnesses)
They were looking for a replacement of lawyer Lorna Kapunan, who severed ties with Napoles for still-disputed reasons, which reportedly included differences over legal strategy.
A crying son in front of one mother dissipated Cui-David’s misgivings.
‘Not the mastermind, not a plunderer’
Now and at all costs, the team said, they will defend Napoles. (READ: Who are the lawyers of Janet Lim Napoles?)
It is not for the money, the David couple claimed. They said they are financially stable as it is, and that Napoles pays them just enough to fund their daily expenses in court.
A co-partner in the law firm, Lawyer Dennis Buenaventura treats the Napoles cases as an opportunity for growth. “Professionally and intellectually challenging” is how he puts it.
Convictions for plunder are hard to come by, David claimed.
Plunder is a complex crime involving the amassing of wealth by public officials with the help of co-conspirators. The burden on the prosecution is great, David said.
In a petition filed before the Supreme Court, the Napoles camp repeatedly denied that the offense committed by Napoles constitutes plunder. (READ: No conspiracy to enrich solons, Napoles tells court)
Over the course of the year, there has been loose talk that Napoles was merely used to shift focus from many other private dealers in the misuse of PDAF who transacted with more lawmakers, including those allied with the administration.
Napoles is said to control only 8 of the 82 NGOs that received PDAF and which had been tagged by the Commission on Audit (COA) as irregular. Holy Spirit as lead counsel
David, David-Cui, and Buenaventura form a formidable team; their support for each other is evident.
David performs well inside a court room, eliciting laughter even from the justices themselves with his theatrical manner of questioning.
It is usually David’s cross-examination that breaks the monotony in court and provides comic relief in a lengthy, otherwise uneventful 3-hour proceeding. (READ: Napoles fooled agencies with rotting crops – Luy)
But in one difficult hearing, a seemingly frustrated David told reporters that all he prays for is to be “led by the Holy Spirit.”
He said the Divine Spirit of the Lord is their team’s “lead counsel.” His wife Lanee once held her gold necklace bearing the image of Mother Mary, saying in Filipino, “She is our guide.”
David also wears a necklace with the image of Saint Benedict embedded in it.
Buenaventura, on the other hand, believes everything on earth is divinely set.
“There are no accidents,” he said in an interview, quoting his Senior Pastor Peter Tan-Chi at the Christ’s Commission Fellowship.
Buenaventura attends the Sunday service of the evangelical church’s chapter in Pampanga, in addition to regular discipleship group sessions.
In it for the long haul
After one particular proceeding where David’s objections were constantly overruled by Justice Efren dela Cruz, he went out of the court room in a visibly bad mood. (READ: Court: Luy got rich with PDAF? Burden of proof on Napoles)
The group brought themselves to grade David’s performance. “We did okay,” one said. “Maybe 80% or 90%.”
But for Napoles to be exonerated, they might just need a grade better than that.
The prosecution is determined to pin down Napoles as having faked the government programs that siphoned off PDAF, even if this means digging up past skeletons.
The current PDAF cases before the Sandiganbayan are considered a litmus test for how the rest of the cases, still to be filed in relation to the scam, will fare.
Unless her petition for bail is granted, Napoles will stay in detention for the entire duration of her plunder trial which is projected to reach more than half a decade.
She can, however, count on a group of loyal lawyers in it for the long haul. – Rappler.com