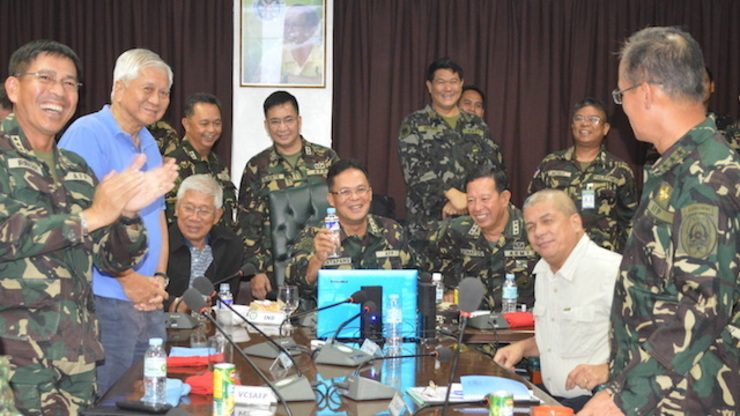 MANILA, Philippines (Updated) – For an hour and 40 minutes, under the cover of darkness, about 40 Filipino peacekeepers evacuated their post in Golan Heights and stealthily walked 2 kilometers to another UN post carrying the firearms and ammunition that the Syrian rebels wanted them to surrender, and some personal belongings.

It was midnight in Golan on a Sunday, August 31. It was quiet and cold. There was no telling if one of about 100 Syrian rebels, who earlier engaged them in a 7-hour heavy firefight, will catch them leaving Position 68 from the back. But there was no resistance. A ceasefire was in place and the rebels, it seems, have taken shelter from the cold, officials said.

In Manila, it was 5 am. About 20 generals were gathered inside the war room in Camp Aguinaldo, monitoring every step of the way. The mood was tense while Colonel Roberto Ancan, commander of the peacekeeping operations center in the Philippines, was on the phone with one of the troops.

“I have a contact with the troops on the ground. We were verifying what their plan was. The chief of staff was also on the situation, approving their respective action,” Ancan told reporters after the mission.

When they got confirmation that the troops reached a secure location, the generals burst into applause.

(Update: The escape mission was executed without the approval of the UNDOF commander, who wanted the Filipinos to surrender their firearms.)

The chief of staff, flanked by the other generals, appeared before the media shortly after the successful escape mission, all tired but proud.

It was Catapang’s first major crisis after assuming command of the Armed Forces of the Philippines in July.

The crisis that began with the standoff on Thursday, August 28, in 2 Filipino-manned UN posts is over. But the situation in Golan remains fluid.

“The situation on the ground is calm but tense,” said the United Nations in a note posted on its web site on Sunday.

Syrian rebels are still holding 44 Fijian peacekeepers and have been attacking other UN posts.

As the internal conflict in Syria escalates however, the peacekeepers have been caught between Syrian government forces and the rebels.

The Philippine military earlier said the troops would stand their ground to protect the UN facility against the Syrian rebels, including some linked to Al-Qaeda’s Syria affiliate, Al-Nusra Front. The United Nations was also holding backchannel talks to end the standoff. But the heavy firefight that erupted on Saturday, August 30, changed the situation.

“UNDOF reports that armed elements also attacked UN Position 68 with mortar and heavy machine gun fire. The UN peacekeepers returned fire and prevented the attackers from entering the position,” the UN said in a post on its web site. Filipino peacekeepers in Golan: A battalion of excellence “Our troops fought back bravely and successfully held their positions after a seven hour firefight. This attack prompted UNDOF to reposition our troops to a more secure position within the mission area,” Catapang said during the press briefing.

About a hundred rebels took different positions around Position 68 but the UN encampment is well-fortified and the troops were well-armed themselves.

It would have been a harvest for the rebels if the Filipino troops surrendered them. They have M4 assault rifles, M60 light machineguns, K3 squad automatic weapons, and Caliber 45 pistols.

Catapang said the Filipino troops fired at the rebels in self-defense. Syrian government forces also came in to provide fire support, which was crucial in preventing the rebels from closing in. Foreign militaries – US, Israel, and Qatar – also helped during the firefight to ease the tension on the troops.

After 7 hours, the firefight died down. The troops hatched the escape mission.

Filipino troops have evacuated at least 3 positions in Golan. They have been likely overran by rebels, but the troops are all safe.

“The Armed Forces of the Philippines and the United Nations will not compromise the safety and security of our troops while in the pursuit of their duties. It is in our national interest to prioritize their safety without abandoning our commitment to international security,” said Catapang.

The other group of 35 Filipino peacekeepers in Position 69 – located 4 kilometers away from Position 68 – were able to evacuate earlier on Saturday.

Fellow Filipino peacekeepers from Position 80 in southern Golan and Irish peacekeepers manning armored personnel carriers trooped to Position 69 to extricate them. The UN said rebels fired upon the convoy.

A 4th group of 58 Filpino peacekeepers in Position 60 located in the Syrian side of the border evacuated on Friday as contigency measure. They relocated to the UNDOF headquarters in Camp Faouar. (READ: UN orders 58 other peacekeepers to leave posts) 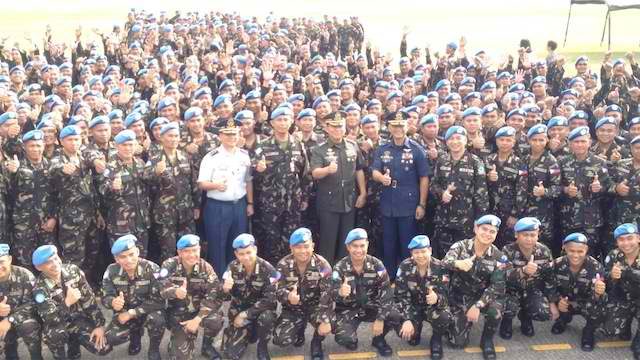 The incident happened as the Philippines is finalizing the pullout of its troops in the area precisely because of the escalating internal conflict there. The troops’ tour of duty ends in October.

The Philippines started to deploy peacekeepers to Golan in 2009. It already considered pulling out its Golan peacekeepers after the kidnapping incidents last year but was convinced by the UN to stay inspite of continued withdrawal of countries like Australia, Croatian and Japan. Escalating internal violence prompted the new decision to pull out.

After the firefight, it may be difficult for them to return to their posts however. “We already engaged them (rebels) in a firefight. It’s hard to go back there again. We will be at a disadvantaged position,” an official said. – Rappler.com