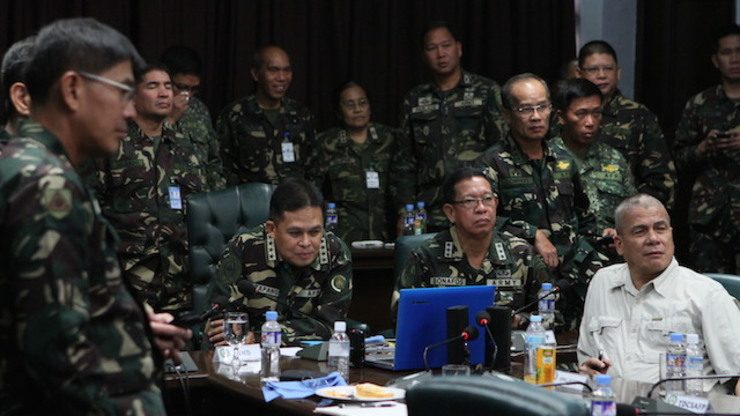 MANILA, Philippines – Filipino peacekeepers in the Golan Heights defied the order of their overall commander, an Indian national, when they refused to surrender their firearms to Syrian rebels in last week’s standoff, the Philippine military revealed on Monday, September 1.

Armed Forces chief General Gregorio Catapang Jr was clearly disappointed with the commander of the United Nations Disengagement Observer Force (UNDOF), whose decisions he said put the lives of the peacekeepers in danger. He was combative and demanded the investigation into UNDOF commander Lieutenant General Iqbal Singh Singha.

“First, in the terms of reference, it was not indicated there that we can be ordered to surrender our firearms. The UNDOF commander wanted to save the Fijians at the expense of the Philippines,” Catapang told reporters Monday.

Catapang said there was never a guarantee that the Syrian rebels would not take the Filipinos hostage – similar to what they did with 44 Fiji soldiers – once they surrendered their weapons. “There’s no assurance na kapag binigay natin ‘yung baril natin – ngayon na-corner sila – the next move is to capture them and make them hostage. Lalong magiging malaki problema ni UNDOF commander,” he said.

He wants Singha investigated by UNDOF. “We don’t need his apologies. What we need is an investigation [into why he issued the order.]”

Catapang explained that he wanted the UNDOF to save the Filipinos first and then they would help the Fijians later.

“They have to understand that the safety of our soldiers is of primordial importance. It prevails over and above the Fijian situation,” he said.

The chief of staff was recalling the series of incidents that began Thursday, August 28, when Syrian rebels took the Fijian peacekeepers hostage and, along with their hostages, later surrounded encampments of Filipino peacekeepers in the Golan Heights.

The rebels demanded them to surrender their firearms, and the Philippine troops’ refusal triggered a standoff that was followed by a 7-hour heavy firefight on Saturday, August 30. On Sunday, while the rebels were asleep, about 40 Filipino soldiers managed to escape and set up in another encampment, the military said in a press conference Sunday morning. (READ: Inside Filipino troops’ ‘Greatest Escape’ in Golan)

The escape was executed without the approval of UNDOF.

The troops got the support from their Filipino commanders. In Golan, Colonel Ezra Enriquez is the commander of the Philippine contigent. In Manila, Colonel Roberto Ancan is the  commander of AFP peacekeeping operations.

“Our troops on the ground didn’t want to give up their firearms. It was relayed to me and I told them that it’s a “no go.” If you give up your firearms, what will happen? What are you going to do to defend yourself? In the rules of engagement, you can use deadly force to defend yourself and the UN facilities,” Ancan said.

While they question the orders of Singha, Ancan said the Philippines remains committed to UNDOF.

UN had backchannel talks for the release of the Fijian peacekeepers and for the Syrian rebels to stand down in the standoff with the Filipino peacekeepers.

But the UN was eventually caught between the Syrian rebels – who was adamant about the symbolism of the surrender of the firearms – and the Filipinos who wanted to keep their honor.

“We do not surrender our firearms. There was a deadlock because Al-Nusra said it was symbolic that they take the firearms. I said, ‘To us, it is not just symbolic. It is our honor at stake,'” Catapang said.

Catapang maintained it was not in the terms of reference of UNDOF that the commander can order the soldiers to surrender their firearms.

He acknowledged that the defiance may have diplomatic ramifications but he said “national interest,” which is the safety of the troops, prevails under the rules of engagement. The successful escape proved the Filipinos were right, he said.

“It still has to be sorted out if we were right or if we were wrong, but I think we are right because we are all safe now,” Catapang told reporters.

Heavy firefight between the Syrian rebels and the Filipino peacekeepers erupted on Saturday, which lasted 7 hours. “UNDOF reports that armed elements also attacked UN Position 68 with mortar and heavy machine gun fire. The UN peacekeepers returned fire and prevented the attackers from entering the position,” the UN said in a post on its web site.

Despite the firefight, Singha supposedly insisted that the Filipinos surrender their firearms. They still refused. They were supposedly told that they would be given safe passage and if the rebels still fired on them, they were supposed to raise a white flag.

It was unacceptable to the Filipinos. “Sabi ko hindi puwede yun kasi ma-hostage din ang sundalo natin (I said we won’t allow it because the troops will be taken hostage,” Catapang said.

The troops had to hatch the escape plan themselves, which they executed midnight on Sunday without the approval of UNDOF.

The Filipinos, Fijian, and about 1,2000 peacekeepers in Golan Heights are under the wing of Singha, commander of UNDOF. Their task is to monitor the ceasefire between Syria and Israel but escalating tension in Syria has dragged the peacekeepers into the conflict.

Prior to the standoff, the Philippine government already decided to pull out its troops from the region. – Rappler.com