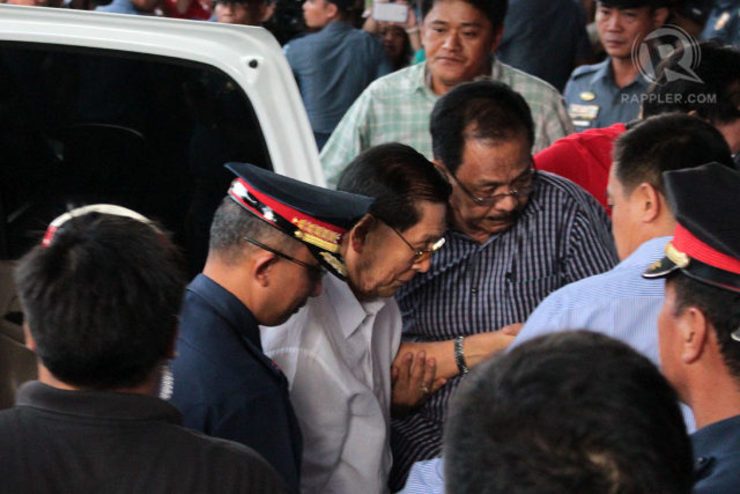 MANILA, Philippines – The Senate implemented on Monday, September 1, the 90-day suspension of Minority Leader Juan Ponce Enrile, as ordered by the anti-graft court Sandiganbayan, which is hearing plunder and graft charges against him.

Senate President Franklin Drilon announced that his office received the court order on Monday, and will “automatically” lift the suspension after 90 days.

This is “consistent with the decision of the Supreme Court in the case involving a member of the legislature,” he added, referring to the SC ruling on Santiago versus Sandiganbayan in 2001 that “the anti-graft law is applicable to elected officials of the Philippine legislature.”

Enrile is charged with plunder and several counts of graft in relation to the alleged illegal diversion of his Priority Development Assistance Fund (PDAF) to ghost projects of bogus non-governmental organizations controlled by Janet Lim Napoles.

Drilon said he learned from media reports that the Sandiganbayan also denied the motion for reconsideration of Senator Jinggoy Estrada, another senator now in detention for similar charges over the pork barrel scam.

“Hindi pa namin natatanggap (We have not received the order), but the moment we receive it, it will be implemented in the same manner that we have implemented the case of Senator Enrile, because the order of the Sandiganbayan is immediately executory, unless restrained by the Supreme Court,” the Senate President said. “We will report to the Sandiganbayan because we are required to report within 5 days from receipt of the order.”

The anti-graft court has also ordered the suspension of Senator Ramon Revilla Jr, also over the PDAF scam.

While senators are suspended, Drilon said, they are not allowed to file bills and sign committee reports. If they are chairpersons of any committees, acting chairpersons will assume their tasks. They won’t be receiving salaries during their suspension from the Senate.