The committee voted 54-4 to declare the first two impeachment complaints over the Disbursement Acceleration Program (DAP), as well as the 3rd complaint over the Philippine-US Enhanced Defense Cooperation Agreement, as insufficient in substance. Each complaint was voted on separately.

The second hearing on the complaints focused on whether there was enough recital of facts or evidence that would justify the 3 main charges brought by the complainants, which are culpable violation of the Constitution, betrayal of public trust, and graft and corruption.

Tensions were high as the deliberations neared its end.

After the committee voted to dismiss the cases, a protest erupted inside the Nograles hall of the South Wing Annex led by pro-impeachment members of the audience. They were escorted out.

Just before the committee decided to terminate debates on the first two impeachment complaints, Colmenares clashed with Eastern Samar Representative Ben Evardone over comments he made in his speech.

It started when Evardone, a member of the Liberal Party, pointed out that Colmenares himself received funds under DAP.

(It is clear that the intention of the DAP fund is good. Even Congressman Colmenares admitted that he received DAP funds but he said these were fully accounted.)

An Inquirer report earlier revealed Colmenares received P25 million for projects under DAP. But Colmenares, who, along with his allies in the Makabayan Coalition, led moves to impeach Aquino, said he had merely endorsed the projects and was unaware that the projects were funded under DAP.

Colmenares said the issue raised by Evardone was irrelevant and reiterated that no funds were coursed through him.

“What does receiving funding under DAP have to do with this? Is this hypocrisy? To Secretary [Florencio] Abad – did we say you have no right to join Aquino because you benefitted during the time of Gloria arroyo? No, we didnt say that. We said, ‘Welcome, you now know how bad Arroyo is, that’s why you wanted to transfer,'” Colmenares said in a mix of English and Filipino.

“Congressman Evardone was with Arroyo before. Did we say, ‘Balimbing ka (you are a turncoat)’? We did not say that. Did we say, ‘Wala kang prinsipyo (you don’t have any principles)’? We did not say that. We said, ‘Tama ang position mo na lumipat ka from Arroyo to Aquino, tama si Aquino, dapat ipakulong si Arroyo (We said, ‘You took the right position to shift support from Arroyo to Aquino, Aquno is right, Arroyo should be jailed’),” he added, amid cheers from the crowd.

Committee chairman Iloilo Representative Niel Tupas Jr called for a break to calm down the situation. Tupas was seen separately talking to the two lawmakers.

In the end, Tupas moved to strike off comments made by Colmenares about Evardone for being “unparliamentary.” It was approved without objections. 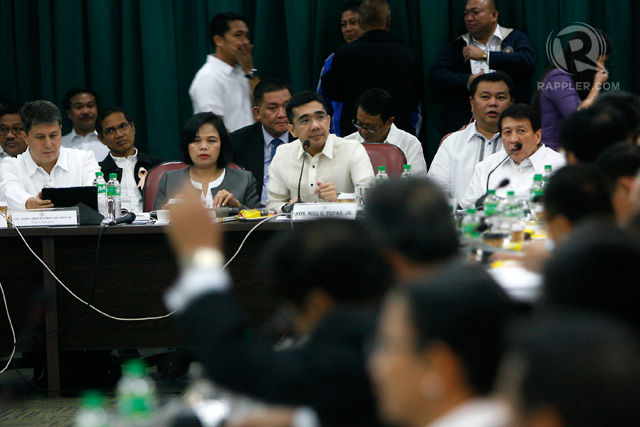 Cagayan de Oro Representative Rufus Rodriguez argued that the filing of the complaint was premature since the SC decision, which the lawmaker said serves as the primary basis of the case, is still the subject of a motion for reconsideration filed by the executive branch.

The Supreme Court declared 3 specific executive acts under DAP as unconstitutional. Started in 2011, the executive branch stopped the program even before the SC could release its verdict. (READ: Where did DAP funds go?)

The sponsors, meanwhile, used proceedings that were followed during the impeachment trial of former Ombudsman Merceditas Gutierrez in 2010 to counter technicalities raised by lawmakers opposed to the complaint.

Colmenares noted that Congress had given a go signal to the impeachment complaint against Gutierrez even if a separate case against her had yet to be resolved by the court.

“If the committee found substance (to impeach) Gutierrez on the basis of a low conviction rate, what more if the case involves P144 billion (in DAP funds)?” Colmenares said.

Tupas ruled that the case before the court is a separate process from the impeachment complaint filed before Congress.

Even if the SCdeclared certain acts under DAP, a government spending program meant to pump-prime the economy, as unconstitutional, Aquino allies argued that the SC also recognized operative fact, a doctrine which recognizes that even if a law is declared void, its effects prior to its declaration of nullity is left undisturbed.

But sponsors countered that the SC only recognized operative fact on projects under DAP but acknowledged that there is liability on the part of the authors and implementors of the now defunct program.

Aside from citing the same issues raised in the SC decision as basis for the impeachment complaint, such as the cross-border transfer of P144 billion worth of funds under DAP, the second impeachment complaint sponsored by youth and student leaders used as evidence declarations made by Senator Jinggoy Estrada that DAP was used to bribe senators to impeach former chief justice Renato Corona.

Isabela Representative Giorgidi Aggabao hit the complainants for using Estrada’s allegations as factual basis even if they do not identify who, when, and where the bribery attempts were made.

“If we take away the high-flying rhetorics of the complaint, it would fall short of what a fiscal would require from a case,” Aggabao said.

The complainants did not have enough evidence to their prove allegations, said Marikina City Representative Miro Quimbo.

(Is there evidence that the President stole anything, had houses built [from the money], bank accounts, such as before? There is not a single one. Nothing was hidden; everything was listed.)

On the matter of EDCA, a deal that gives US troops wider access to Philippine bases and allows joint activities between the two countries’ militaries, complainants alleged that Aquino committed culpable violation of the Constitution and betrayal of public trust by “sacrificing the sovereignity” of the Filipino people without even consulting Congress.

But lawmakers said impeaching the President may not be the best recourse to sort out grievances against the deal.

“If we oppose EDCA, the right venue to raise this is the Supreme Court. This is not enough basis to impeach the President,” said Ako Bicol Representative Rodel Batocabe. At the beginning of the hearing, Colmenares appealed to the committee to approve the substance of the impeachment complaints to allow Aquino to answer the allegations presented in the complaint.

“Let the President defend himself. It’s not the committee’s role to lawyer for him,” Colmenares said.

Ilocos Norte Representative Rodolfo Fariñas raised a counter-argument against Colmenares’ statement that the committee was “lawyering” for the President.

“This is not lawyering. Just like [in trial courts], we just want to see to it that no useless action is brought to trial. We are protecting the unnecessary dragging of an impeachable official here,” Fariñas said.

Administration allies took the opportunity to highlight indications showing that there was lack of public support for the impeach moves.

(It’s curious why for the first time in history, even other members of the minority bloc and the independent bloc – not one of them expressed support for this. This only goes to show that this impeachment complaint is empty.)

Even the man who stands to gain the most from Aquino’s impeachment opposes the move, said Cavite Representative Elpidio Barzaga.

“When we say that the people want this, what is your basis? Even the Vice President who will be the biggest beneficiary does not want this complaint to push through,” Barzaga said.

With all 3 complaints now dead even before Aquino could answer the allegations, Kabataan Representative Terry Ridon said they are eyeing the filing of technical malversation and possible plunder charges against Aquino when he steps down from office in 2016. 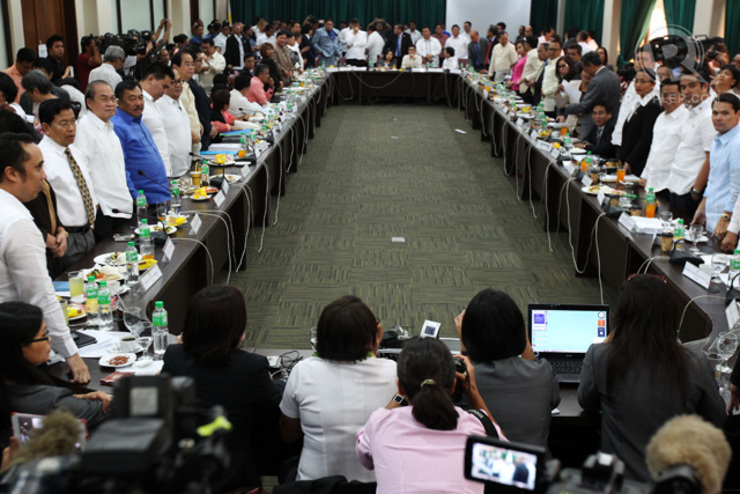 In Malacañang, Communications Secretary Sonny Coloma was asked whether the Palace played a hand in the result. Coloma gave assurances it did not.

“Wala pong ginamit na impluwensiya ang ating Pangulo at ang pamahalaan (The President or the administration did not use any influence,” he said.

Another Palace official noted the “transparent” House proceedings on the impeachment complaints against the President.

“The Committee on Justice of the House, after a thorough review of the allegations in terms of its substance, has dismissed the complaints against the President. We take note that the process took place with transparency, not just according to the rules, but to give the proponents every opportunity to make their case,” Deputy Presidential Spokesperson Abigail Valte said in a statement. – Rappler.com