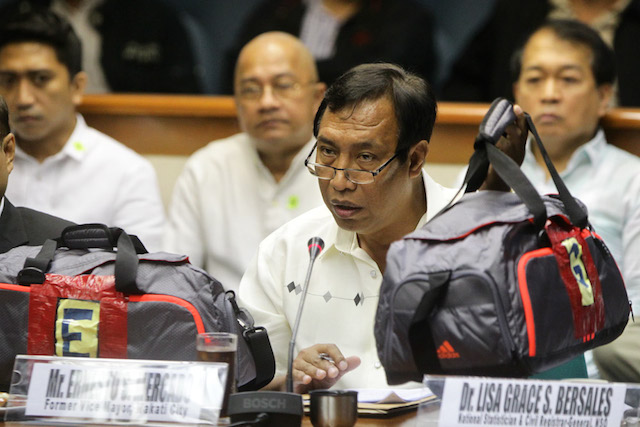 MANILA, Philippines (2nd UPDATE) – While he was the mayor of Makati, Vice President Jejomar Binay allegedly earned 13% in kickbacks from the city’s projects.

Mercado said he personally delivered the cash from the projects, which were packed into 3 bags – one marked “J” for Vice President Binay’s son and then-Makati councilor Junjun Binay; “E” for Binay’s personal assistant “Ate Ebeng”; and a third marked “G” for Gerry Limlingan, another aide of the Vice President.

Mercado is one of the resource persons in the Senate probe on the building, the basis of a plunder case against Vice President Binay and his son Junjun, the incumbent Makati Mayor.

The former vice mayor previously admitted he had “benefitted” from the Makati building and said it was likely Vice President Binay got kickbacks as well since he was the mayor at the time.

In return, Mercado claimed, Binay promised him P120 million ($2.7 million) in funds for Mercado’s political party. But he only got P80 million in the end, under Binay’s orders, he alleged.

Mercado alleged that Binay had raised over P1 billion ($22.7 million) through kickbacks for the 2010 elections, funding the Vice President’s campaign, as well as the campaigns of his children.

Asked why Binay got 13% and not any more and any less, Mercado said it was possible other Makati officials also got kickbacks as well.

The alleged kickbacks reportedly continued during Vice President Binay’s “break” from the mayorship, when his wife Dr Elenita Sombillo-Binay took over. One time, Mercado alleged, Elenita Binay scolded him for failing to deliver “her cash.”

Mercado claimed he delivered the cash to her daughter, now Senator Nancy Binay.

Mercado said that even as a city councilor in the 1990s, he got “allowances” from then-mayor Jejomar Binay.

Sometime in 1992, said Mercado, he allegedly started receiving between P15,000 to P20,000 in cash tucked in envelopes. He said the money was coursed to them through a certain “Attorney Ignacio” who reportedly told Mercado and other councilors, “Basta good boy kayo, masaya kayo dito (As long as you are good boys, you’ll be happy here).”

“Good boy,” Mercado said, meant not opposing the mayor in city council meetings. The money inside the envelope steadily increased through the years. In 1995, they would reportedly sometimes get between P50,000-P70,000 on top of a regular P30,000 “allowance.”

In a statement, Senator Nancy Binay strongly denied Marcado’s allegations against her family. “It is easy to invent stories without basis,” she said.

“Nakakalungkot na ginagamit ang Senado upang magkalat ng mga paratang na walang basehan (It saddens me that the Senate is being used to spread baseless allegations). It is hard that we all have to go through this just because my father wants to continue to serve the people,” the senator added

Vice president Binay’s spokesman for political affairs Cavite Governor Jonvic Remulla in a separate statement, criticized Mercado for “conveniently used the name of a dead person to make malicious and baseless allegations against the Vice President and his family.”

“Such a statement not backed by evidence will not stand in a court of law but only in a kangaroo court where judgment has been rendered even before the hearing started,” added Remulla. – Rappler.com