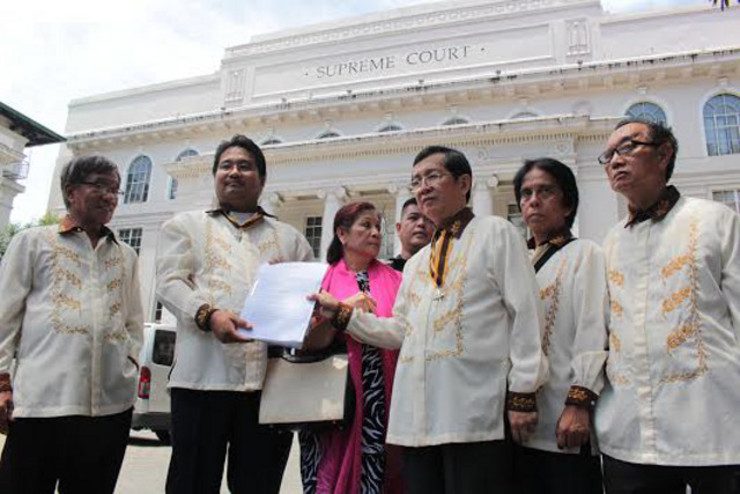 MANILA, Philippines – A group created in honor of national hero Jose Rizal asked the Supreme Court to order the demolition of a condominium that threatens the sightline of Rizal Monument in Luneta Park.

The Knights of Rizal (KOR) submitted a 26-page petition for injunction to the SC on Friday, September 12, asking to stop the construction of the controversial Torre de Manila building.

Aside from a temporary restraining order (TRO) to suspend construction, the group asked the SC to order the demolition of whatever is already standing in the lot.

As of August 20, the condominium is 19 floors high and 23% complete, according to its developer, real estate giant DMCI Homes Inc.

The building, intended to be more than 40 stories high, stirred controversy when it was found to have violated local zoning laws.

Rising directly behind Rizal Monument, it also threatens to ruin the “visual dominance” which national heritage laws say must be preserved for such important landmarks as the monument.

“Torre de Manila building would overshadow the entire monument, whether up close or viewed from a distance. No one can take photo of the Rizal Shrine without also capturing the high-rise condominium at its back,” reads the petition.

The group cited two laws that protect the monument: Republic Act 4846 on the preservation and protection of cultural properties, and Republic Act 10066 or the National Cultural Heritage Act of 2009.

In the petition, the group says Torre de Manila qualifies as a “nuisance”, defined in the Philippine Civil Code as: “any act, omission, establishment, condition of property, or anything else which annoys or offends the senses; or shocks, defies or disregards decency or morality.”

Through the petition, KOR also offered a suggestion to the high court: to create a special legal remedy like a “Writ of Pamana (heritage)” or “Writ of Kasaysayan (history)” for the protection of culturally-important structures.

It would be similar to a “Writ of Kalikasan (nature)”, a legal remedy found only in the Philippines, which empowers the SC to order government agencies to respond to critical environmental damage.

KOR said a Writ of Pamana would be another “historic first” from the Supreme Court.

The filing of the petition comes a week after the Senate inquiry hearings on Torre de Manila called by Senator Pia Cayetano, chair of the Senate Committee on Education, Arts and Culture.

After the hearings, one of which was attended by a DMCI Homes representative, she concluded that the developer had continued their construction in bad faith.

Despite resolutions from the Manila City Council citing hastily issued building and zoning permits and calling on a suspension of construction, DMCI Homes continued their work, said Cayetano.

DMCI Homes legal counsel Roel Pacio had maintained that they were not aware of any violations since Manila City Hall issued them all the necessary permits back in 2012. – with reports from Pia Ranada/Rappler.com