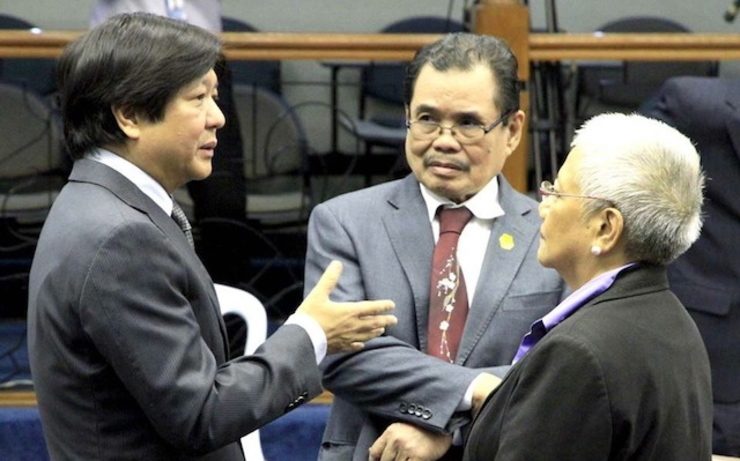 MANILA, Philippines – It’s a criticism that has been hurled at the proposed law seeking to create a new autonomous government in Mindanao – that it creates a state within a state, threatening the sovereignty of the Philippines.

On the first Senate briefing on the proposed Bangsamoro Basic Law on Tuesday, September 23, Senator Ferdinand “Bongbong” Marcos Jr asked the peace panels that negotiated and crafted the bill about the “elephant in the room.”

“If the Bangsamoro Juridical Entity is a state in all but name as it has a permanent population, a defined territory, a government, and a capacity to enter into relations with other states, this would seem to describe as well the Bangsamoro (political entity). Why is it not a state within the state?” said Marcos, who chairs the Senate committee on local governments.

Government peace panel chair Miriam Coronel Ferrer answered: “Your honor, I think the first criteria actually applies to all local government [units]. With regard to the third criteria, it’s very clearly stated in the draft bill in accordance with the Constitution that the matter over foreign policy, foreign affairs belongs to the central government and is co-shared with the Senate when it comes to ratification of treaties.”

Marcos noted that there are specific powers devolved to the Bangsamoro that could impinge on the sovereignty of the state. For instance, barter trade and counter-trade with ASEAN countries is listed under the exclusive powers of the Bangsamoro government – a power that would involve foreign policy.

“[If we compare them with other LGUs], LGUs are not allowed to enter joint economic agreements, they cannot take out loans from foreign entitties or foreign banks, whereas the Bangsamoro is allowed to do that, so there is a difference,” Marcos said.

Presidential Adviser on the Peace Process Secretary Teresita Deles clarified that the power is limited to the regulation of barter trade.

“They are not allowed to enter into agreements. In fact, this is already a devolved power under Republic Act 9054 (the ARMM Organic Act),” Deles said.

While panels have argued that the eventual final peace agreement does not create such, Senator Miriam Defensor Santiago, a constitutional expert, has called it as unconstitutional as it “attempts to redefine the sovereignty” of the Philippines.

This provision is only one of the many issues that senators said the defenders of the Bangsamoro bill need to clarify. How power will be shared between the central government and the Bangsamoro government is the “single biggest subject” that needs to be deliberated on about the proposed law, Marcos said.

The Bangsamoro bill seeks to establish an autonomous government in Mindanao that will replace the Autonomous Region in Muslim Mindanao and give the ne entity wider political and fiscal autonomy.

It will be parliamentary in form, to be composed of a combination of political parties elected through proportional representation, district representatives, and reserved seats similar to the current party-list system.

It is also designed to get automatic appropriations similar to the internal revenue allotment of LGUs. Under the bill, the Bangsamoro will get a 4% share in national internal revenue collections, to be taken from the national government’s share.

With a new kind of autonomy being proposed for the Bangsamoro, senators Aquilino Pimentel III and Pia Cayetano shared Marcos’ concerns about how possible conflicts between the Bangsamoro government and the central government will be solved.

Marcos asked: What if, in the transition process, there are issues that cannot be resolved? Who will prevail?

Senators questioned the definition of the phrase “parity of esteem,” referred to in the proposed law as the concept stating that: “The Central Govenrment shall respect the exercise of competencies and exclusive powers of the Bangsamoro government. The Bangsamoro Government shall respect the exercise of the competencies and reserved powers of the Central Government.”

Marcos said the provision gives yet another impression that the Bangsamoro government is on equal footing as the national government, giving rise to the issue of sovereignty.

Lawyer Bong Montesa, one of the independent lawyers who assisted the Bangsamoro Transition Commission, the body which crafted the first draft of the law, said “parity of esteem” does not refer to “parity of powers” but is about “mutual respect” for the “competencies” of the national and Bangsamoro government.

Other concerns on power-sharing raised in the briefing included:

Marcos asked: What if the conflict is not resolved?

The panels did not give a direct answer. Instead, Ferrer provided a background on how the provision came into being.

On the jurisdiction of the Bangsamoro chief minister and the PNP over the Bangsamoro police, Ferrer said: “It’s going to be shared power just like in the exercise of powers in LGUs, where LGUs exercise operational control and supervision as well.”

Marcos asked whether the PNP chief can countermand the order of the chief minister.

Deles answered: “In principle, yes, since the Chief Minister also gets his powers from the regional police board, which is part of National Police Commission.”

On auditing bodies, government peace panel member Senen Bacani said the Bangsamoro Commission on Audit will have a mandate similar to the internal audit of private corporations, with external audit done by the national COA.

Marcos said the Senate will engage with Iqbal on how far Congress can amend the proposed law with respect to the peace accord signed.

“The principle they are affirming is that of affirmative action because Bangsamoro lands have been left behind in terms of investment. But then, again, many LGUs make the same argument,” Marcos said.  Whatever it is, again, the Bangsamoro would have to explain exactly why their situation is not the same with other regions.”

The present ARMM is plagued by poverty as it continues to suffer from the lowest gross regional domestic product in the country.

The proposed Bangsamoro Basic Law seeks to create institutions that will put an end to 4 decades of armed struggle in Mindanao that has killed over 120,000 people.

Senator JV Ejercito urged the peace executives to talk to local officials in areas that will be included in the plebiscite. Ejercito said many mayors he has talked to have expressed skepticism over joining. He did not name who the mayors were.

Deles said she believes the skepticism over the proposed Bangsamoro is borne out of the lack of information about it.

“What divides the country is neglect, the lack of appreciation for diversity,” Iqbal said. “The Bangsamoro is our best insurance against independence. If the Bangsamoro work to bring peace, then independence will become less attractive. Look at the result of the no vote for Scotland, where the no vote defeated the yes vote. The same applies for the Bangsamoro,” he said.

The Tuesday briefing is only the first of a series of hearings on the proposed law.

The House of Representatives is set to conduct its first committee hearing on the BBL on Wednesday, September 24.

Both the Senate and the House will conduct hearings in Mindanao. – Rappler.com