Sep 29, 2014 11:08 AM PHT
Carmela Fonbuena
Facebook Twitter Copy URL
Copied
(UPDATED) Vice President Jejomar Binay remains the runaway winner, with 31% of the respondents saying they will vote for him 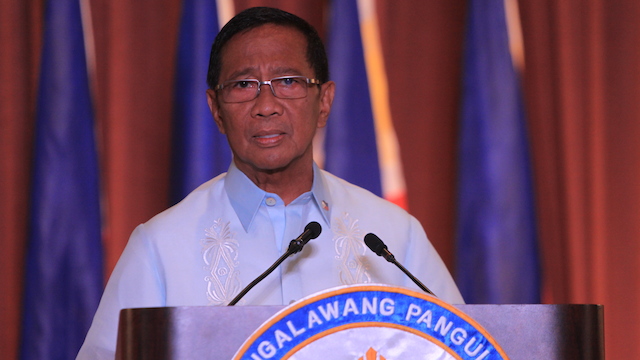 MANILA, Philippines (Update 2) – Vice President Jejomar Binay continues to top the latest Pulse Asia nationwide survey on the May 2016 elections inspite of a string of corruption allegations hurled against him in relation to the overpriced Makati City Hall Building II.

His lead has declined by a significant 10 percentage points, however. The survey has an error margin of 3 points.

A survey conducted September 8-15 shows he remains the runaway winner, with 31% of the respondents saying they will vote for Binay. It is down from his 41% in the June 2014 survey of Pulse Asia.

The survey doesn’t capture the impact of Binay’s televised address delivered shortly after the survey period, September 18, and his succeeding TV political advertisements.

Binay lost supporters across the board – 11 points in Metro Manila, 9 points in Balance Luzon, 10 points in the Visayas, and 9 points in Mindanao. (Regional disaggregates have 6-point error margins)

Binay also dropped 13 points among ABC, 10 points among D, and 7 points among E. D and E comprise the majority of Filipino voters, the target audience in his newly released TV political ads.

United Nationalist Alliance (UNA) president Navotas City Representative Toby Tiangco said they expected the declne.  “Given the very challenging and rough times that the Vice President faced in the past weeks, we expected a bigger decline – but the latest survey results are a surprise for us,” he said in a statement issued after the release of the Pulse Asia survey. (READ: Binay turns UNA into political party for 2016)

Pulse Asia included 14 names in a survey of 1,200 respondents conducted at the height of corruption allegations against Binay.

Interior Secretary Manuel Roxas II, the presumptive administration bet, is a far second with 13% of voters saying they will vote for him. This is 6 points higher than his 7% in the June survey.

Roxas gained 5 points in the NCR, 11 points in the Visayas, and 8 points in Mindanao. The change in Balance Luzon is statistically insignificant. Roxas also registered a huge leap of support from 6% in June to 19% in September coming from voters in the socioeconomic E class.

The other winner is Senator Miriam Defensor Santiago, who gained 5 points from 7% in June to 11% in September. Santiago has been teasing the public with a possible presidential run since July.

Considering the survey’s error margin of 3 points, the numbers of Roxas and Santiago are statistically tied with Manila Mayor and former president Joseph Estrada (10%) and Senator Grace Poe (10%).

The other loser in the new poll is the vice president’s accuser himself, Senator Alan Peter Cayetano, who has been leading the Senate probe on the overpriced Makati City Hall Building II.

Cayetano, who registered 5% in the June survey, is down to 1% in the September survey. He lost support across the board, including NCR and Balance Luzon where he previously posted the highest numbers.

Trailing behind the first 5 names are the following:

Aside from the allegedly overpriced Makati City Hall Building II, among the other hot issues during the survey period were the impeachment bid against Binay, the junked impeachment bids against President Benigno Aquino III, the suspension of Senator Juan Ponce Enrile, the supposedly foiled bombing plot in NAIA-3, and the escape of Filipino troops in Golan Heights, request for emergency powers for President Aquino, and the submission of the Bangsamoro Basic Law to Congress. – Rappler.com