MANILA, Philippines – The Senate session hall was a sea of stars on Tuesday, September 30, for a hearing on the proposed Philippine National Police (PNP) modernization and the “increase” in criminality in the country.

Surrounded by his top officers, PNP chief Director General Alan Purisima spoke in public for the first time, amid allegations of corruption and ineptitude in the face of a perceived rise in criminality.

Despite the allegations against him, Purisima said he would not step down.

(The attacks against me didn’t surprise me. But I will not turn my back on my duties. We will not allow corruption to win.) Purisima faces at least 3 graft and plunder complaints before the Ombudsman, over alleged anomalous deals, an under-declared home in Nueva Ecija, and the construction of the “White House” in Camp Crame.

Top officials of the PNP – from the command group to the chiefs of the National Capital Region’s police districts were in the Senate ahead of the hearing. Anti-crime groups and several officials have called on Purisima to either resign or take a leave in the wake of the allegations against him.

In his opening statement, Purisima hit his detractors and lamented the attack on his Nueva Ecija property which, he said, he built hrough his hard work.

He said the motive behind the “attacks” against his character were clear: the PNP’s crusade to eradicate corruption and fix systems within the police force.

One example was the PNP’s Firearms and Explosives Office (FEO), which, Purisima said, used to be the center of corruption in Camp Crame.

Under Purisima’s leadership, the PNP FEO introduced key reforms: aside from the passage of a new gun law, the PNP “centralized” its firearms registration and started digitizing its records.

The PNP also shuffled its personnel, removing “corrupt” employees from the Crame office. But some of the FEO’s reforms were heavily criticized. Courier group Werfast was put under a cloud of doubt after media reports alleged the company was linked to Purisima.

Purisima admitted the PNP is far from perfect. “I will not deny that PNP is a work in progress….The PNP needs a transformation process to chip away imperfections to become an ideal law enforcement organization that deserves the respect of its people,” he added.

But, the police chief added, the PNP would not stop running after the corrupt in its ranks. “Hindi rin natin sasantuhin ang ating mga kabaro na pumiling lumihis sa kanilang tungkulin at naging kampon ng kasamaan (We will not spare our colleagues in uniform who have chosen to stray from their obligations and became allies of evil),” he said.

The police chief was not able to address the allegations last week, since he was out on a pre-scheduled trip to Bogota, Colombia, for an anti-kidnapping conference. 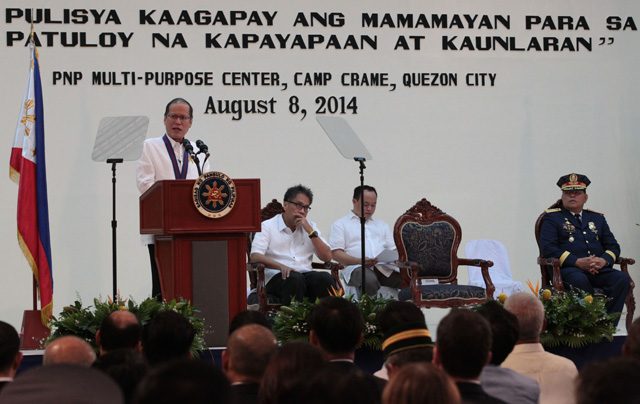 Purisima was able to speak with President Benigno Aquino III on Monday afternoon, the first time the two met since Aquino’s trip to Europe and the US, and Purisima’s trip to Colombia.

Aquino has been defending Purisima from the allegations against him.

The two share a history together – Purisima was part of the team tasked to secure the young Aquino during the presidency of his mother, the late Corazon Aquino.

After the meeting with the President, Purisima called for a command conference among the PNP’s top officials. PNP spokesman Senior Superintendent Wilben Mayor said top officials discussed key learnings from the Colombia trip.

No “loyalty check” happened during the conference and the PNP will function as is, despite the accusations against its chief.

Most of the police officials at the Senate declined to speak to the media ahead of the hearing. – Rappler.com