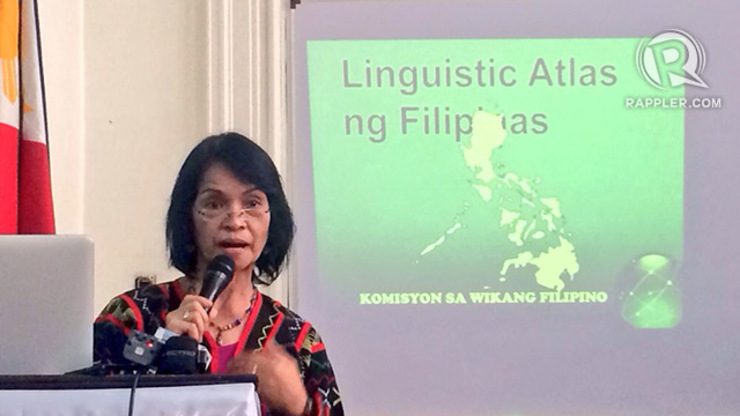 Facebook Twitter Copy URL
Copied
The Komisyon sa Wikang Filipino's 'linguistic atlas' – ready by 2015 – will show where languages are are spoken, by whom, and what their variants are and their connection to other languages

MANILA, Pilipinas – The Komisyon sa Wikang Filipino (KWF, or the Commission on the Filipino Language) is mapping languages in the Philippines, which will show how rich the country’s linguistic heritage is.

So far, the commission has finished research on 89 languages and is verifying 111 more with the help of Sentro ng Wika at Kultura (Center for Language and Culture) offices across the country, according to KWF Commissioner Purificacion Delima.

The project started in 2014 and is expected to be completed next year. Called the “Linguistic Atlas ng Filipinas” (Linguistic Atlas of the Philippines), the project is funded by Senator Loren Legarda, a known advocate of cultural preservation and promotion.

The project aims to document all the languages in the country, especially those that are in danger of “extinction.” The Linguistic Atlas will illustrate the languages according to where they are spoken, who are speaking them, as well as what their variants are and their connection to other languages.

The KWF has collected “voice samples” for 25 of the 111 languages that it is in the process of verifying, said said Delima.

Delima added that they discovered languages – like the Tagabulos in the province of Aurora, and Gubatnon Mangyan in the island of Mindoro – that were not in previous Philippine language lists.

There were even names of Philippine languages that actually refer to the group who are speaking it.

Meanwhile, Delima reported that they discovered one language that they deemed as “dead.”

The Ayta Sorsogon language of the Agta Cimaron o Agta Tabangnon community in the province of Sorsogon was not being used by the said community anymore, said Delima.

She reasoned that discrimination may have figured in the “death” of the Ayta Sorsogon language.

Delima shared that elders in the community were not teaching the language to their children “dahil ayaw malaman ng komunidad na sila ay Agta, dahil sila ay binu-bully sa paaralan (because they would not want others to know that they are Agta, for fear of being bullied in school)” said Delima, who went herself to the Agta Tabangnon community. – Rappler.com