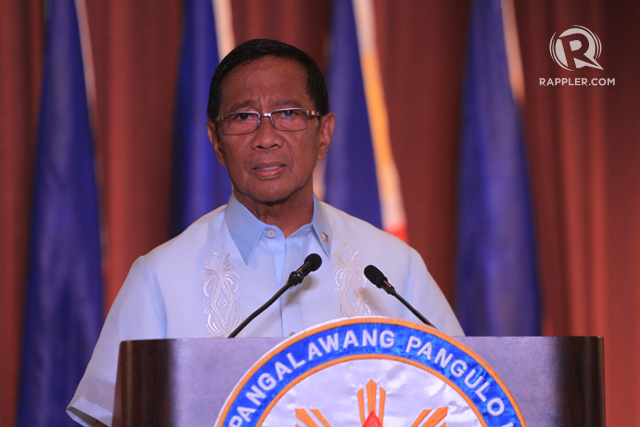 MANILA, Philippines – Vice President Jejomar Binay has lost the approval and trust of many Filipinos in the past 3 months, with his performance and trust ratings dropping in large numbers, based on the recent survey of Pulse Asia.

Binay was the biggest loser in the latest Pulse Asia “Ulat ng Bayan” survey on the performance and trust ratings of the Philippines’ top 5 officials, which was released Tuesday, October 7.

Between June and September 2014, the country’s second-highest official’s trust and approval ratings dropped by 15 percentage points, the survey results revealed.

Binay’s approval rating currently stands at 66%, down from 81% in June. Those who disapprove of his performance as vice president grew – from 4% in June to 10% in September. Meanwhile, those who say they are undecided on him grew from 16% in June to 24% in the latest survey.

The drops in both approval and trust ratings were seen across all geographic divisions (NCR, Luzon, Visayas, Mindanao) and all classes (ABC, D, E).

Another big loser in the latest survey is Drilon, who also saw a big drop in both his approval and trust ratings. The Senate President’s approval rating changed from 52% in June to 39% in September, a drop of 13 percentage points, the survey revealed.

At the time the survey was conducted – September 8-15, 2014 – the Vice President was caught in various controversies regarding allegations that his family earned millions from running the Makati government. These included the Senate investigation on the allegedly overpriced Makati City Hall Building II, and questions over Binay’s wealth. (READ: Red flags in ‘overpriced’ Makati infra projects)

The Binays have ruled Makati for nearly 3 decades now. The Vice President’s son Junjun is the incumbent mayor, while his daughter Abigail is congresswoman. Another daughter, Nancy, is incumbent senator. (READ: The lord of Makati: Can Binay explain his wealth?)

The survey was also conducted prior to the Vice President’s big speech September 18, where he tried to address the accusations hurled against him and his family.

Only last March, a Pulse Asia Ulat ng Bayan Survey showed that Binay would be the runaway winner in a presidential race, with 40% selecting him as their first choice.

Drilon’s trust ratings also fell, but by a smaller margin: from 46% in June, it now stands at 37%, a drop of 9 percentage points.

President Benigno Aquino III also enjoys the approval and trust of a majority of Filipinos, the Pulse Asia survey showed.

Except for some instances, “the performance and trust ratings of President Aquino, House Speaker Belmonte, and Supreme Court Chief Justice Sereno are generally constant between June and September 2014,” Pulse Asia said.

This survey, Pulse Asia said, was based on a sample of 1,200 representative adults, with a +/-3% margin of error at the 95% confidence level.