MANILA, Philippines (UPDATED) – Based on the latest testimony of a former Makati official at the Senate hearing on the alleged overpriced Makati building on Wednesday, October 8,  former Makati City mayor Elenita Binay has “royal” taste – reportedly at the expense of the people she served.

Former Makati vice mayor Ernesto Mercado, a former ally of the Binays, enthralled the Senate Blue Ribbon subcommittee with videos of “Hacienda Binay,” a 350-hectare farm that supposedly spans 4 barangays in Rosario town in Batangas province, and a colorful narration of the Binay family’s expensive taste and hobbies.

The Office of the Vice President later issued a statement categorically denying ownership of the property but Mercado also showed videos of conversations with local residents showing that the property is a well-known property of the Binays.

If  netizens still couldn’t believe that Makati City Mayor Erwin Jejomar Binay has an elevator in his residence, this will likely shock them more – Mercado said the highlight of the estate is a garden patterned after London’s Kew Gardens or the Royal Botanical Gardens in Kew.

And like the Kew Gardens, which was originally the garden of the Royal Family’s summer palace which was later opened to the public, the alleged Binay version also has a mansion, supposedly to replicate the summer palace. (Dr Binay had it patterned after the…Kew Gardens in London….The house you see there, according to history, was built by the royals of England and was their place of leisure.) 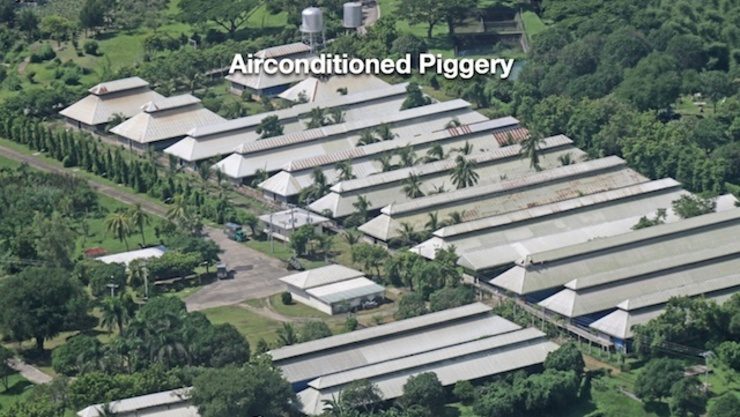 The property also has an air-conditioned piggery, a mansion with a resort-type pool, a showcase of Mrs Binay’s imported orchids, a horse ranch, a mansion with the Kew Gardens replica, a 40-car garage, man-made lagoons, an aviary, and a fighting cock farm.

Mercado claimed Mayor Junjun Binay is a horse lover who owns imported horses. Mrs Binay has also supposedly brought a number of mayors’ wives to the farm to show them her orchids collection.

The piggery was air-conditioned because Mrs Binay, he said, hates the smell of pig manure.

(The doctor doesn’t want to smell any bad odor and see flies hovering in their mansion. She has high ambitions; she seems to feel that she would be First Lady of the Philippines after the next elections.)

Out of the total 350 hectares, Mercado said 150 hectares were developed, complete with road networks. Mercado detailed how the Binays acquired the property, which he estimated to be valued at P1.2 billion ($26.77 million*).

New photos of the property appeared in an exclusive report in the Philippine Daily Inquirer on the day of the hearing. The same property was the subject of an investigation of Newsbreak magazine in 2001.

Mercado challenged the media to divert their attention from the controversial property of police chief Alan Purisima to check the alleged properties of the Vice President, as the PNP chief’s Nueva Ecija property pales in comparison to the Binays’ alleged estate. Lawyer Martin Subido, the Vice President’s legal counsel, maintained that Binay used to operate a piggery in a small portion of the compound – about 9 hectares of leased land – but he has sold the business in 2010 to Agrifortuna Inc owned by a certain Laureano Gregorio.

“The house, swimming pool and garden mentioned in reports are not owned by the Vice President. They were owned by Laureano Gregorio,” said Subido.

The lawyer confirmed that Mrs Binay owns the flower farm. “It is consistent with what we are saying that the flower farm is just a lessee in Rosario, Batangas. So what is happening is that, they are confirming what we have been stating but they are giving additional interpretation to suit their needs,” he said.

The entire compound is only 145 hectares, not 350 hectares as Mercado claimed, he added. It was supposedly Gregorio who entered into a Memorandum of Agreement with Sunchamp Real Estate Development Corporation of businessman Antonio Tiu for the rights to the entire compound, in 2013.

“At present, Sunchamp Real Estate Development Corporation is the absolute owner of the improvements and facilities mentioned in today’s inquiry. In fact, Sunchamp Real Estate Development Corporation has likewise introduced new improvements such as an asparagus farm, greenhouses for high value crops, hotel, all in line with its vision to create an agri-tourism park,” Subido said.

(It makes me laugh when they say that 9 hectares were leased. And they are also saying that the Vice President had divested his interests in Agrifortuna. That can be true. But the truth would all come out.)

The Senate probe showed that the owners of Agrifortuna and Sunchamp have links to the Binays, prompting senators to call them “dummies” of the Binays.

Mercado alleged that the new owners of Agrifortuna, based on Securities and Exchange Commission (SEC) records, are “fronts” of the Binays. Aside from Gregorio, among the owners is Gerardo Limlingan, whom Mercado described as the “bagman” of the Binays. Senator Alan Cayetano also described Limlingan as the “Napoles of the Binays.”

Mercado claimed he was with the Binays when they started the farm in 1992. The Vice President experimented with 5 pigs and Mercado was supposedly the one delivering the feeds. They would later form the Agrifortuna Corporation.

Senator Antonio Trillanes IV also believes that Sunchamp’s Tiu is undoubtedly a “dummy” of the Binays. He also noted that Sunchamp’s corporate secretary is Subido himself, the lawyer of Binay. His Greenergy Holdings invested in Sunchamp Realty in 2013.

Subido confirmed he is a partner in the law office of Representative Binay and corporate secretary of Greenergy, but he lamented the supposed “spin, a different interpretation by the resource speaker, because of their preconceived disposition on how they want to portray the Vice President.”

Subido dismissed allegations that they are dummies of the Binays.

During the hearing, Trillanes also defended how the probe expanded from the  Makati building to several other allegations including the supposed “Hacienda Binay.”

The hearings – the 8th on Wednesday – has branched out from the alleged overpriced Makati building to other corruption allegations against the Binays, 3 of whom served as Makati mayor: Vice President Binay, Mrs Binay, and the incumbent mayor.

The Binays have been accused of rigged bids of Makati projects, receiving kickbacks, and using dummies to hide lands and businesses, among others.

Pimentel planned to wrap up the first part of the resolution – the probe on the Makati  building – on Wednesday so that the subcommittee can move on to other issues, but Mercado’s new revelations prompted him to hold another hearing at a still undetermined date. They are inviting the Vice President to attend the next hearing to hear his side.

Before the start of the hearing on Wednesday, Pimentel denied with finality the jurisdictional challenge raised by Mayor Binay and several Makati officials, which Mayor Binay is expected to halt through the intervention of the Supreme Court. (READ: Mayor Binay to seek SC ‘injunction or TRO vs Makati probe)  – Rappler.com